Attitudes about discrimination vary sharply based on political party, age, gender and other factors.

The results come from the 2016 Public Affairs Pulse survey, a telephone poll of 1,000 Americans conducted Sept. 12–17 by Public Opinion Strategies and sponsored by the Public Affairs Council. The annual survey asks Americans to weigh in on a host of topics related to business and society.

Most Americans also believe other types of discrimination — based on sexual orientation, disability, religion, gender and age — are serious concerns. 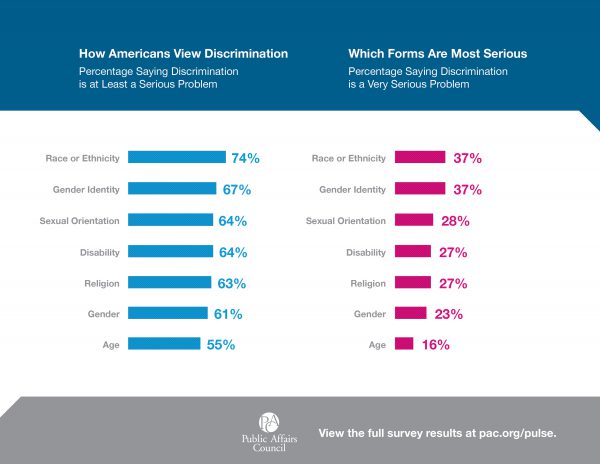 Majorities of Independents say all seven forms of discrimination are serious, but the percentages are not as high as those for Democrats.

A recent Gallup poll shows that 45 percent of Americans say they are not a member of either major party.

Read more about discrimination and demographics based on gender, age and ethnicity

Across all categories of discrimination, however, the most common response from the public is that corporate actions have made no difference at all.

Public Supports More Efforts by Companies
On the other hand, if major companies were to take steps to prevent discrimination based on any of these factors, most Americans say they would view these efforts favorably. This is particularly true for discrimination based on disabilities, race, age and gender. But it applies to every category — even those portrayed as controversial by the news media. For example, while 10 percent of the public say they would think less favorably of companies taking steps to prevent gender identity discrimination, 53 percent say they would have a more favorable opinion of firms working to address this issue.

For full results of the Public Affairs Pulse survey and the survey methodology, visit pac.org/pulse.