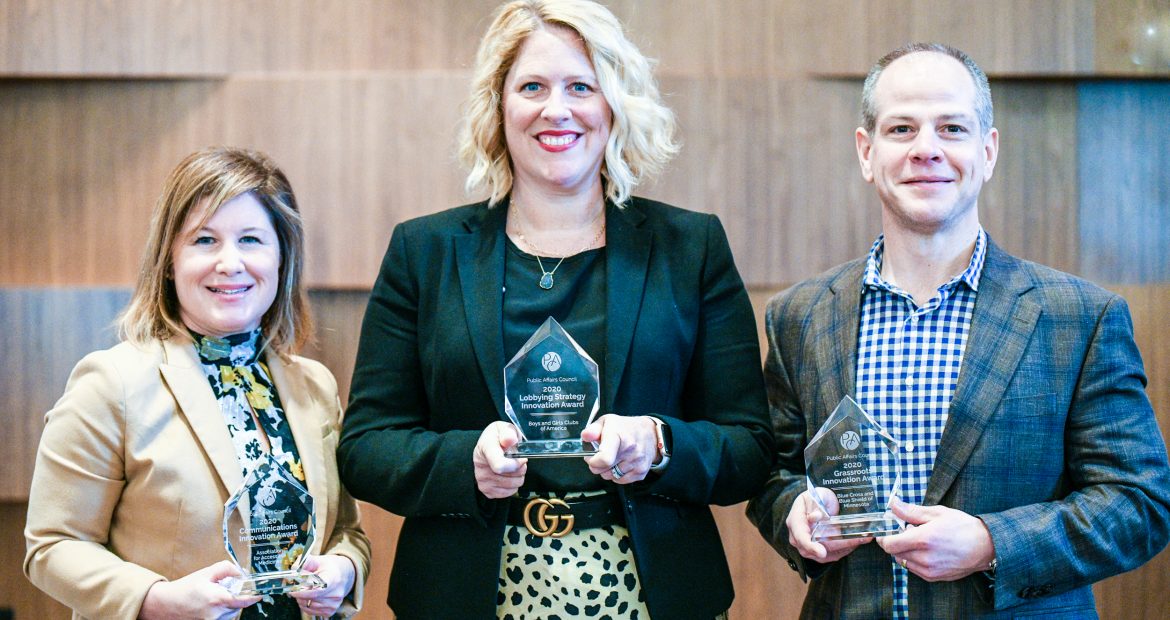 An association that represents companies that manufacture generic products faces challenges in the branding area. That’s the situation the Association for Accessible Medicines found itself in this past year, and its successful efforts to communicate its value to members of Congress and other policymakers were creative enough to win the 2020 Advocacy Innovation Award in the Communications category, announced at the Council’s Advocacy Conference in Las Vegas.

This year’s other Innovation Award winners are the Boys & Girls Clubs of America (BGCA) in the Lobbying category and BlueCross and BlueShield of Minnesota (BCBSM) in the Grassroots category.

“It wasn’t easy to pick winners this year, because we received so many outstanding entries,” says Nick DeSarno, the Council’s director of digital policy and communications practice. “The winners are simply the best of the best, which should inspire all of us. They offer great examples for others in our profession to learn from.”

The challenge the Boys and Girls Clubs of America (BGCA) faces is, in some ways, the opposite of AAM’s.

“We currently have strong bipartisan relationships with elected officials at the national, state and local levels, putting us in a position to receive public support from leaders at all levels of government,” says Julie Teer, BGCA’s chief development and public affairs officer. “But we weren’t viewed as a policy leader. We equip the young people who participate in our programs to succeed, but we weren’t leading the charge on issues that impact them. We decided it was time to build our policy-setting muscle as an organization, demonstrating how we can partner with government to solve some of our nation’s biggest challenges.”

With young people in this country facing so many daunting problems, BGCA’s task was one of internal strategic discipline to narrow its focus, zeroing in on the top problems and solutions where it is positioned to make the greatest contribution and impact for youth. “We want to ensure that the needs of youth are elevated to the forefront of every policy agenda in our country,” Teer says. “The challenge is that there are so many issues to choose from that we had to exercise a good deal of discipline in our thinking, to focus on the core policy priorities that reflect what youth need to succeed today and moving forward.”

The result of this process was the development of the Agenda for America’s Youth (AAY), BGCA’s inaugural advocacy platform, organized into five policy pillars that reflect the needs of young people.  It is designed not only to focus club leaders and supporters but also serves as a roadmap for legislators at all levels of government as they prioritize strategies, policies and legislation that will affect youth. The Agenda for America’s Youth Policy Guide, released as part of the AAY launch, spells out BGCA-endorsed policies, including, for example the Youth Workforce Readiness Act of 2019 which was introduced in Congress in December.

“Right now, half of young Americans say they do not believe in the American dream, and even those who do say it’s not a possibility for them,” Teer says. “At the same time, by contrast, we set young people up for success, and we’ve been doing that for 160 years, in over 4,700 communities with 4.7 million young people each year. We’re reversing this negative trend through experience and opportunity. The AAY brings clarity and consistency to what we will raise our expansive collective voice around. It unites us as an organization, ensuring we’re speaking with a consolidated voice for all America’s youth, not just the ones we serve every day.”

“I could offer a lot of statistics, but here are two: Our club kids get more A’s and B’s than their peers, and 83% say that can make a positive change in their communities. Through the policies we support in the AAY, we want to drive the same outcomes for every youth across the nation.”

Years in development, the Agenda for America’s Youth was established with the input of club leaders, board members and, of course, youth. It launched this fall in D.C. and in communities across America with plans to launch state-specific versions during legislative sessions. Partners and advocates used the hashtag #AgendaforAmericasYouth, garnering almost 17 million impressions. It has also been used more than 1,600 times, including by key members of Congress.

Minnesota boasts the highest voter turnout of any state in the union, with 74.5% of eligible voters casting ballots in the past four general election cycles. That compares to 62% of all Americans. “We’ve got a high voter turnout in this state already,” says Scott Keefer, vice president of public affairs at BlueCross and BlueShield of Minnesota (BCBSM). “That makes the turnout of our employees all the more impressive. Fully 88% of our employees voted in 2016, which is highly gratifying.”

But even more encouraging, Keefer says, is that 98% of members of CitizenBlue — the company’s nonpartisan, employee-driven get-out-the-vote (GOTV) program — make it to the polls. All told, 1,000 of the company’s 3,500 employees have become CitizenBlue members.

Founded 20 years ago, the program has succeeded, Keefer says, “not only because of the employees who run the GOTV program but also because our leadership just sees civic participation as part of being a good employer and a good corporate citizen. I’ve been here eight-plus years, and this part of our corporate culture has always impressed me. We’ve celebrated the passage of the Voter Rights Act, for example, and do regular programming around citizen milestone events like Flag Day.

“We have 100% leadership buy-in, and — this is important — the idea has always been that leadership here isn’t concerned about who you vote for, as long as you vote. Being a good citizen involves more than casting a ballot. That’s why CitizenBlue even affords members the opportunity to train to be election judges.” The company offers paid time off to vote policies, too.

But keeping an increasingly far-flung and diverse workforce involved is a challenge in itself. BlueCross and BlueShield of Minnesota now employs hourly as well as salaried workers in various cities in the state. This alone means different approaches are needed. You have to keep it fresh. “We hosted meetings with candidates that were casual meet-and-greets, not structured forums,” Keefer says. An “I Will Vote!” photo booth contest proved especially popular.

The program was successful enough to be profiled, with comparable success stories from other organizations, in the Harvard Business Review, in an article based on a Harvard Kennedy School case study.

Besides holding bipartisan candidate forums and creating voter guides familiarizing them with the roles of different officeholders, BCBSM “leveraged existing staff capacity, modest budgets, and workplace events like voter registration drives that provided employees with key information to help them register and get to the polls,” the Harvard Business Review article states. These efforts “were especially effective among younger populations — those most likely not to vote — who nearly doubled their participation from the 2014 election.”

“Our industry has incredible market share — 90% of drugs prescribed in the U.S. are generics — but almost no mindshare,” says Erica Klinger, AAM’s senior director of marketing. “Inherent in our name, our industry doesn’t do much in the way of branding. So people tend to take our products for granted. With so much attention given to prescription drug prices, especially on Capitol Hill, it’s important that we are recognized as part of the solution, not part of the problem.”

Fixing that perception (or lack thereof) isn’t easy, especially when the budget you have for your program is, let’s just say, limited. “Our entire budget is less than the big brand-name drug company association spent just on lobbying in 2019 alone,” Klinger says. “We needed to do something that was economical, that used buzz marketing to break through the noise. So we came up with something that was memorable … and tasty.”

To that end, Klinger and her team decided to celebrate the 35th anniversary of President Ronald Reagan’s Sep. 24, 1984 signing of the Hatch-Waxman Act, which created the generic drug industry in America. They bought and distributed cupcakes on Capitol Hill and elsewhere, and in the process publicized AAM’s annual Access & Savings Report, which quantifies the benefits of an industry that has far surpassed the earliest predictions for its impact.

When Reagan announced the signing in a Rose Garden ceremony, he said it was “estimated that consumers will save more than a billion dollars over the next 10 years” through access to generic alternatives to brand-name pharmaceuticals. In fact, savings for consumers and the health care system itself came to $293 billion in 2018 alone and $2 trillion in the previous decade.

Among other recipients of cupcakes were former Republican Sen. Orrin Hatch of Utah and former Democratic Rep. Henry Waxman of California, sponsors of the legislation, which is still remembered as a model for bipartisanship. To AAM’s delight, both posted photos on their social media networks with the hashtag #hb2generics.

“We had no advertising budget for this, so all the media we got was earned media, not paid media,” Klinger says. “This was old-school ‘social media,’ meaning person-to-person. We made personal contacts, face-to-face, and included a generic savings ‘cheat sheet,’ which resulted in 700,000 Twitter impressions and drove over 1,000 views of the event and the Access and Savings Report pages, a 65% lift in web traffic compared to the previous week.”

“Year after year, I’m impressed with the evolving creativity of our members,” says Council President Doug Pinkham. “Their inventiveness is always encouraging, and I look forward each year to seeing what they’ve done. The Innovation Awards are one way we can recognize them for their accomplishments and share with other Council members.”

The Innovation Awards are presented annually at The Advocacy Conference. And winners are invited to present their campaigns during the awards ceremonies.