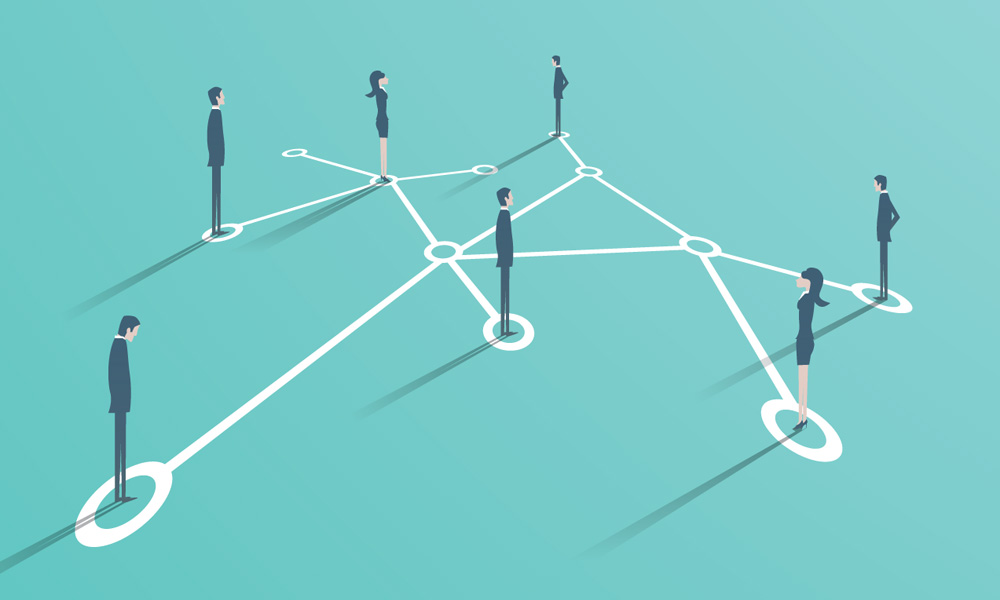 While social media can be useful to help sell products, many corporations have also used Twitter to come out from behind their logos and tell stakeholders about the causes they care about and public policies they support. By promoting their charitable initiatives and providing thought leadership on crucial policy issues, companies reach new audiences and improve their online reputation.

Airbnb champions their policy position of responsible home sharing around the globe through Twitter. Airbnb conveys their stance through compelling stories of their customers and home sharing community members. 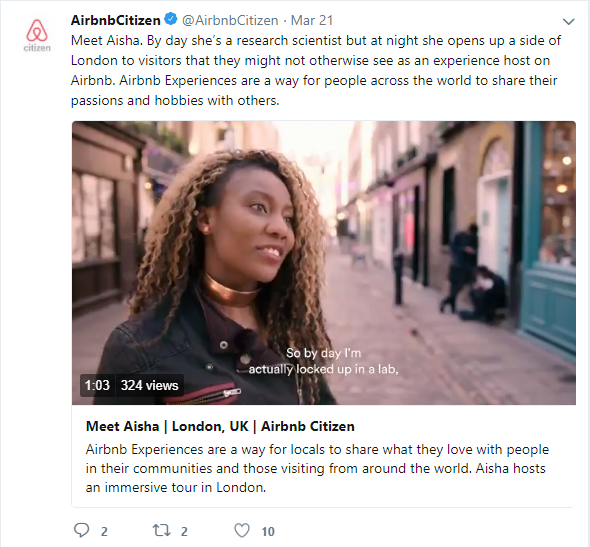 Charter Policy Tweets about a wide array of issues, including infrastructure development and minimum wage policy. By sharing testimonials of real-life customers and small-town government officials, this account brings policy discussion directly to its followers. 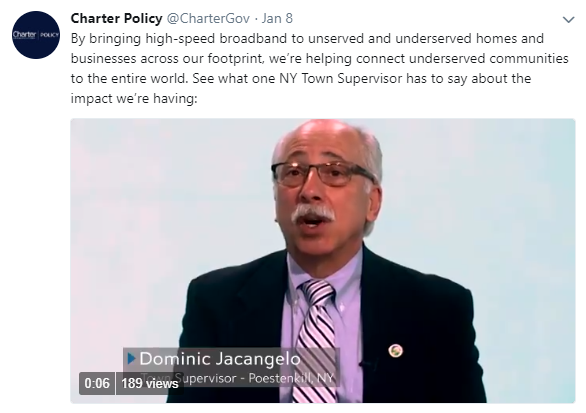 Eli Lilly and Co. (@LillyPad)
This is the company’s official Twitter feed and offers “tweets on public policy, Life at Lilly and corporate responsibility.” They take great advantage of live events and hashtags with the thought being that they can take advantage of moments when followers may engage with their content. 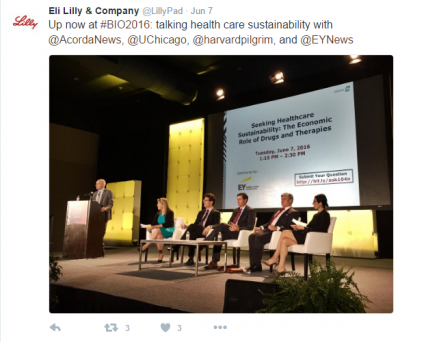 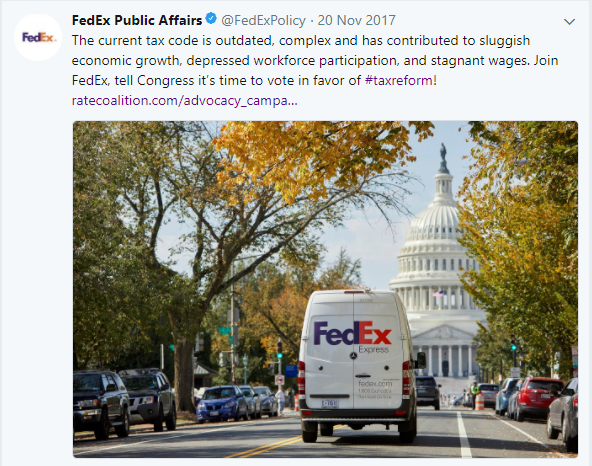 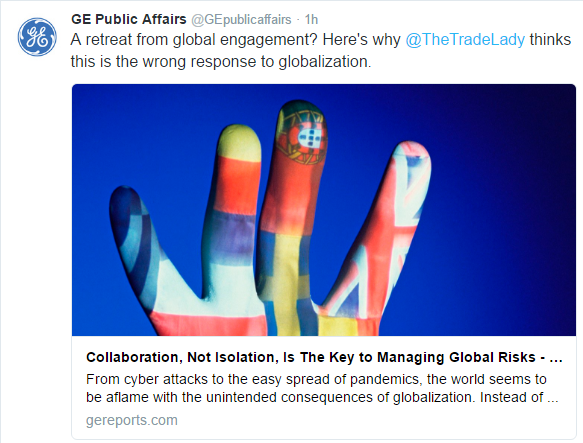 Home Depot GR (@HomeDepotGR)
Home Depot uses this account to foster a relationship between its employees and elected officials by “connecting them to the political process.” Home Depot interacts directly with state and federal elected officials and promotes its policy agenda, including job creation as well as veterans’ and women’s issues. 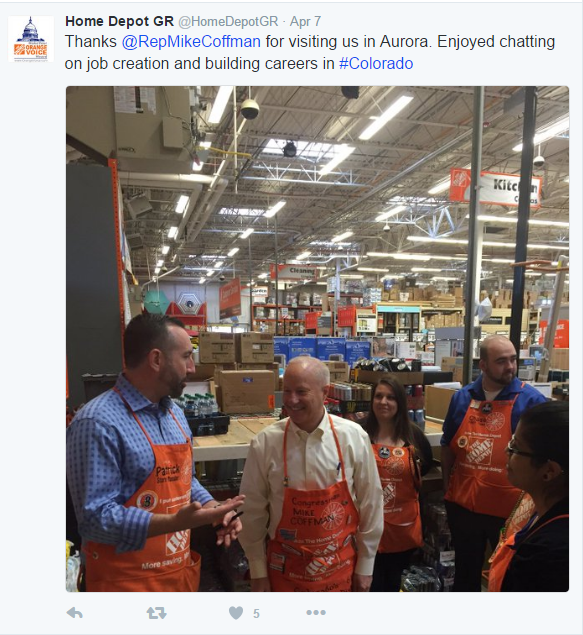 Honda In America (@HondaInAmerica)
Honda has numerous Twitter accounts, but this is the official account for its Washington, D.C., government relations office. The government relations and public affairs teams supply the content. They do a great job of showing off their innovative designs, safety features, manufacturing facilities and U.S. footprint. 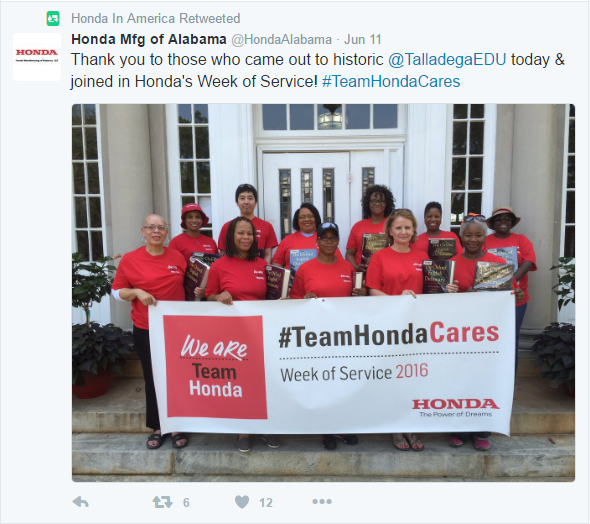 IBM’s Government and Regulatory Affairs team uses this Twitter account to raise awareness and advocate for key technology and policy issues. IBMPolicy’s goal is to increase the active engagement of its followers on a variety of policy concerns, such as data policy and high-skilled immigration reform. 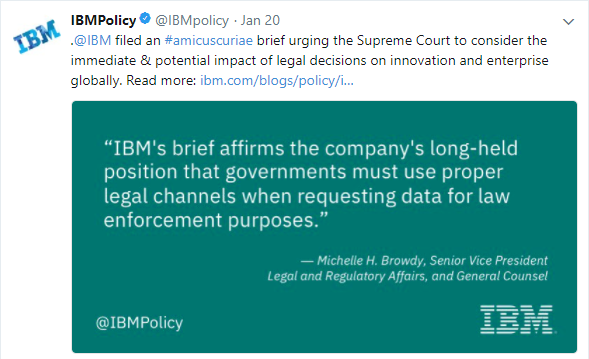 International Paper’s Government Relations team uses this account to engage their employees and key stakeholders in their public policy advocacy efforts. Their twitter account accomplishes this via compelling graphics and consistent engagement with followers especially during legislative site visits or meetings. 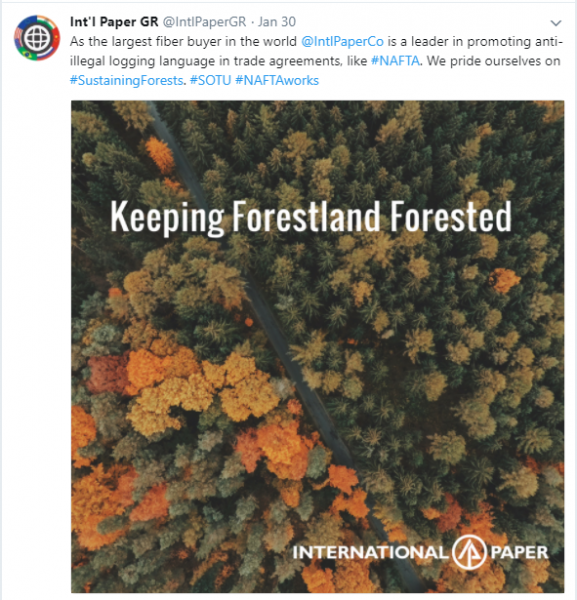 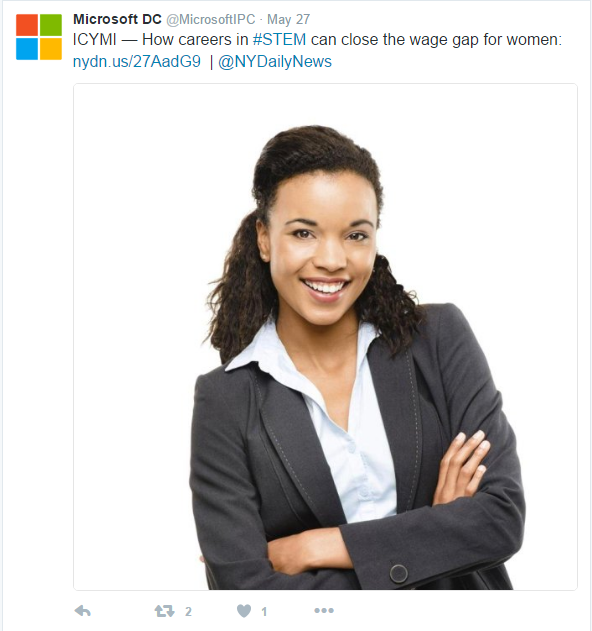 PayPal’s government relations department uses their Twitter account to drive the discussion around a range of issues that affect its customers such as cybersecurity, mobile payments and privacy. This account shares compelling articles and keeps its audience informed on the latest developments on public policy. 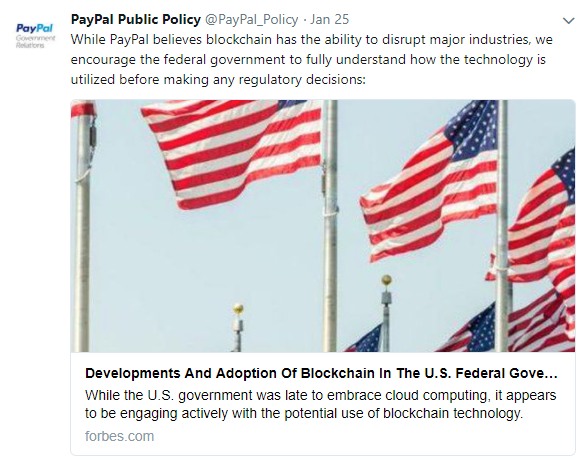 Raytheon (@Raytheon)
Raytheon utilizes digital storytelling and compelling images to highlight their mission in providing government agencies with the necessary tools and technologies they need to keep Americans safe and secure. 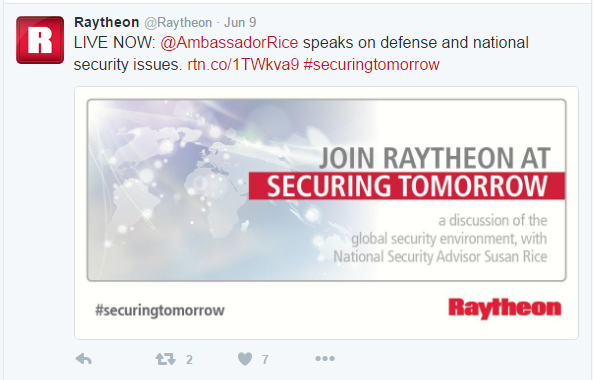 Samsung uses its Twitter account to share updates on the matters that affect the lives of its consumers, employees and communities. From sharing information on specific policy issues to Tweeting an article about young individuals who are revolutionizing their field, Samsung engages its viewers through a wide variety of policy and corporate responsibility stories. 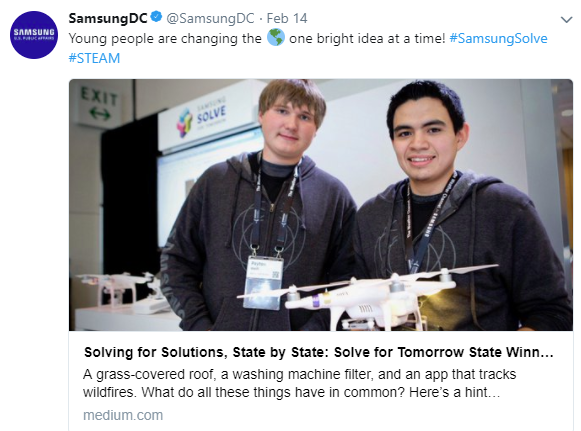 SmithsGroupUSGovRel (@SmithsUSGovRel)
This U.K.-based company spans several highly regulated sectors, including medical, transportation, manufacturing and construction. They have a small D.C. office and use their government relations team to provide the social media content for this recently created feed. 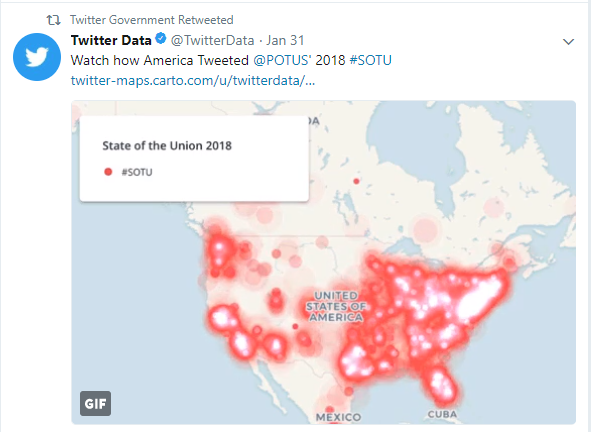 Uber Under the Hood (@UberPubPolicy)
Uber uses this feed both for promotion and to advance the public affairs agenda. They are fighting regulation all over the country and have reached out to their social media followers to help them fight the battle. This account is largely educational and promotional but also mixes in a healthy amount of political education and calls to action.

United Technologies discusses policy issues that are pertinent to both its industry as a whole and the individuals affected by its operations in the United States. This includes promoting the growth of domestic advanced manufacturing as well as emphasizing the importance of getting students involved in Science, Technology, Engineering and Math (STEM) and Career Training Education (CTE). 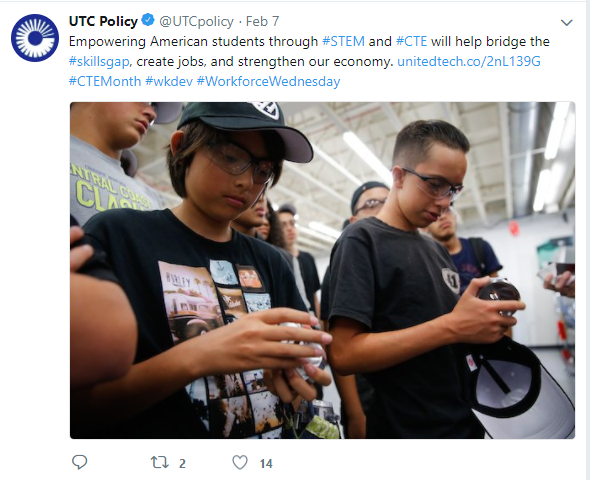 UPS Public Affairs (@UPSPolicy)
This account focuses on “the intersection of politics, government and better business” and “advocate[es] for a policy framework for global growth.” UPS uses it to engage directly with policymakers and to inform the public about policy issues surrounding trade, transportation and sustainability. 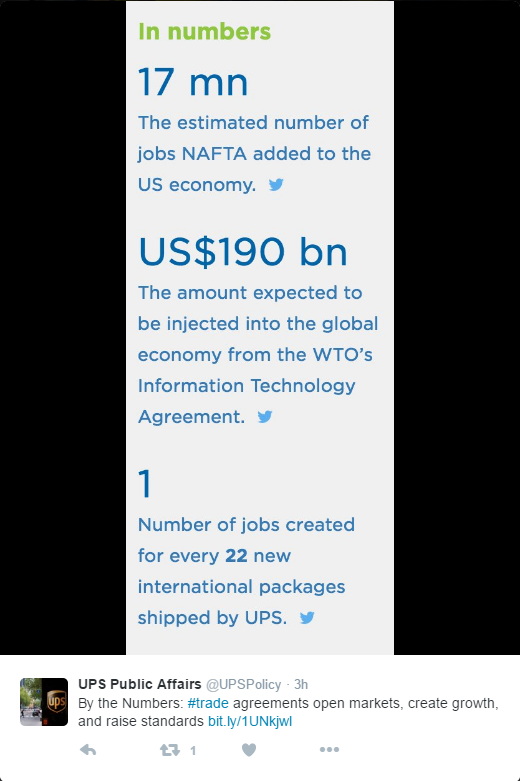 Verizon’s regulatory and public policy team uses Twitter to speak out on policies impacting its customers. By sharing articles and following critical issues closely, this account keeps its viewers informed and engaged in the policymaking process.

Walmart Action (@WalmartAction)
Walmart has split their social media channels into different segments based on the feed’s audience. This particular account focuses on interactions with state and federal elected officials, veterans and education efforts, employee volunteerism and any support they provide to local schools and charities.