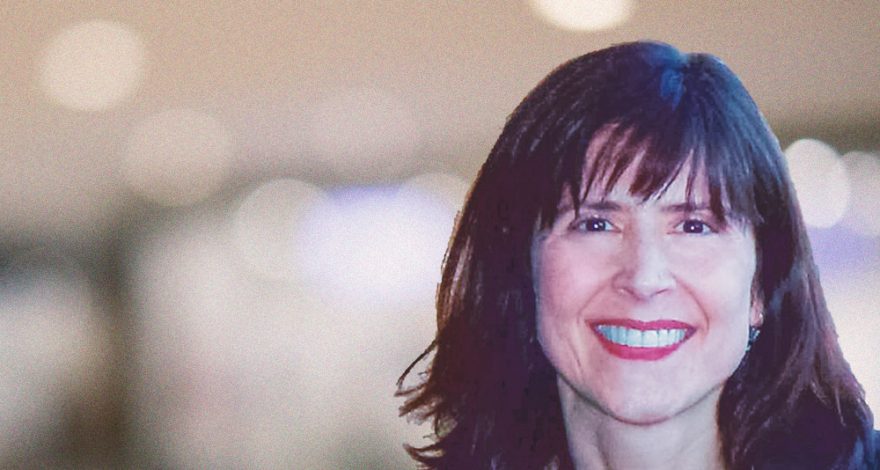 Your pre-public affairs career is fascinating. You did theater and even improv?

Yes, I grew up in the Midwest and was doing theater before I went to college and hoped to get back into it after I graduated. But I didn’t have the persistence for theater or raw talent for improv the way some of my friends did. Several went on to teach at Second City or to start their own performance companies here in Chicago. I studied theater and journalism in college, and journalism equipped me in many ways for public affairs work. But in a way, it was my mother’s story that gave me an appreciation for the importance of transparency and communication, at least between ruling bodies and publics, as well as an appreciation for our political system. She has never missed a chance to vote while living here.

In what way did her experience shape your understanding of politics?

My mother grew up in East Germany during the Cold War. She wanted to go to college, but to do that she had to join the Communist Party, which she opposed. A friend reported her to communist authorities after she revealed to him her true feelings. So, she had to get on a train bound for West Berlin or suffer the consequences. She had no documentation giving her permission to be on this train, which was a serious offense. She was 17 and terrified. While boarding the train, she saw two people on the platform who also must have had plans to escape but then changed their minds when they heard warnings on loudspeakers. They turned around and ran, and my mother saw them shot to death by Russian guards, right then and there. She managed to keep her cool and boarded the train.

After the train left the station, she sat next to a woman who had an extra passport. She gave it to my mother to use (it wasn’t until 1960 that photos were required, and this was 1959). She must have been my mother’s guardian angel. She probably was one of the Germans on the west side of the wall who helped people escape. But my mother almost foiled her own escape when she shouted, “I’m free!” on the train platform in West Berlin, which was controlled by the Communists. Her guardian angel quickly silenced her and led her to the street below, where she would be free to start a new life. So I grew up knowing something about the realities of world politics.

But your first work wasn’t in politics, was it?

Not my first job, no, but it didn’t take long to get into public affairs. I worked for a law firm, and from there I went to work as a press person for the legal department of the City of Chicago, which was life-changing because the legal department touches everything the city does — legislation, municipal codes, housing, everything. I loved it. I worked in public relations, and for a time was a partner at a boutique PR firm, with just a graphic artist, a photographer and me. As much fun as that was, I didn’t like bearing the whole responsibility of the firm, especially when a client’s business went under and couldn’t pay its bill.

So then what did you do?

I went back to working in political campaigns. Earlier in my career, I was press secretary for a candidate for president of the Cook County, Ill., Board of Commissioners. He was the first African-American elected to that seat. After my time with the firm, I went back to serve as deputy campaign manager for his re-election bid. After that, I was fortunate to learn of a public affairs opportunity with SBC, at the time a telecommunications company with headquarters in San Antonio, Texas. Eventually, SBC bought AT&T. That was in 2005, and I’ve been here ever since because it’s fascinating, and I love it.

What do you love about it?

I learned early on that we’re not just a phone company. We’re about emerging technology, corporate citizenship, R&D, technical expertise, working with regulators — everything. Technology evolves quickly and has been dynamic since I joined AT&T, and now we are going in even more directions with content creation. Also, political campaigns have an ephemeral quality to them because people move around so much. By their very nature, the environments are short-lived. At AT&T, I found people who really believe in the company and had formed long and deep personal relationships through their work here. I worked with AT&T lawyers who, when traveling on business, didn’t stay at hotels even though they could have. Instead, they chose to stay in each other’s houses because they enjoyed each other’s company. One reason I wanted to stay at AT&T was not just because the work was and is fascinating, but because of the people and the relationships they form.

What are you working on right now?

I’m director of our CSR College Recruitment Strategy and Support, which is responsible for developing programs to boost awareness of AT&T’s commitment to CSR with college students. Charlene Lake [AT&T’s chief sustainability officer and the Council’s chair] recognizes how important it is to get the message out to the younger generation because they increasingly expect a company to be engaged. These students want to give back, they want to know that organizations stand for something. At AT&T, our commitment isn’t just hyperbole, so this is a great opportunity and very exciting.

We just completed a program at the University of Tennessee in Knoxville where they had a semester-long course on CSR. Working with the instructor, we developed a course where the students worked with small businesses in the community to determine their knowledge and interest in carbon-emission reduction. The students did a great job and provided valuable insight. We’re looking forward to perhaps working with more students in the classroom.