A Visit with … Jim (Mac) MacGregor 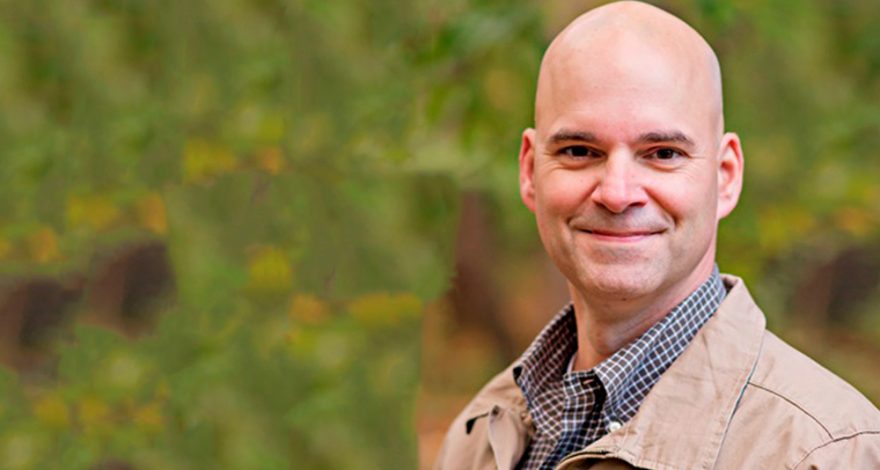 A Visit with … Jim (Mac) MacGregor

Your military background is a little unusual for a public affairs professional. Tell us that story.

It is unusual, and I am really grateful for the experience. After high school, I didn’t really know what I wanted to do with my life. So I spent about a year doing blue-collar jobs — painting houses and things like that. Then I enlisted in the Navy.

The same day I left boot camp and flew home on leave, Saddam Hussein invaded Kuwait. My next station was school where the Navy trained me as an aircraft mechanic and then shipped me off to the USS John F. Kennedy, an aircraft carrier already deployed in the Red Sea. I was just 19 and pretty green, so first I did a lot of what used to be called KP duty — washing pots and pans in the scullery – one of the more glamorous jobs on the ship. Everyone worked 12-hour shifts, seven days a week, on an aircraft carrier, and when my 12-hour shift was over, I’d go up to the flight deck, for another five or six hours at night, to help load bombs onto our planes as part of Desert Storm. I loved the action, the adrenaline rush, and told my superior officers that I wanted to do more of that. So I was trained and worked as a flight deck troubleshooter, figuring out problems with the planes. By 1994, though, Bill Clinton was downsizing the military, and it was getting tougher to make rank — to rise in the Navy — so I decided to do something else.

I went to college, majoring in environmental studies and government, and prepared myself to transition into the white-collar world. I feel like I’ve done pretty well with that adjustment, in part because of the habits I developed and things I learned in the Navy. I learned to follow orders, of course, but I also benefited from the way things are done in the military. A lot of people might not realize this, but the military doesn’t do a lot of micromanaging. You’re given a task to do, and then they more or less leave the execution of that task to you. Someone inspects what you’ve done afterward, which makes perfect sense because you don’t want someone messing up a multimillion-dollar aircraft. And in the Navy, if you need to find something out, if you don’t understand something, you’re encouraged to ask questions. They don’t mind if you go up the chain of command to get the answers you need. They really have an open-door policy.

So what did you learn from this?

I learned to get the answers I needed to get a job done, and I think I learned how to manage people. It has only been in the past 10 years or so that I realized I like managing staff and that I’m pretty good at it. I learned in the Navy to deal with a lot of different people in different situations. When you are 20 years old and you have to explain to a two-star admiral that he isn’t going to fly that day and that it might take two days to get the plane ready to fly, that’s not an easy conversation to have. But you learn to do it. So now I am prepared in my current career to go to my manager or my staff and have a frank conversation with them. It’s great to be prepared to do that — not comfortable, always, but to be able to do it.

Once you returned to civilian life, one of your jobs was as deputy COO of the Democratic Congressional Campaign Committee, overseeing the independent-expenditure team. What do you think of the way so many Democratic candidates are saying they won’t take PAC money and trying to rely on small contributions from millions of individual donors?

I think it is a little shortsighted to rule out contributions from all corporate PACs. What they don’t seem to realize, or admit, is that PAC money is made up of small individual donors. Corporate PACs are just a conduit for small donors’ contributions. What I wish these candidates would do is be more strategic about which PACs they accept contributions from and then be willing to defend the choices they make. RPAC, the Realtors® PAC, really is bipartisan. In the 2018 election cycle, we gave 51percent to Democrats and 49 percent to Republicans. We’re usually pretty much right down the middle, and the difference of 1 or 2 percentage points usually comes down to who is in control of Congress. And the issues we’re working on — homeownership and private property rights — are ones that Republicans and Democrats ought to be able to support.

One of your responsibilities at the Realtors® is “strategic visioning.” What, exactly, is that?

That’s probably just language I thought would make what I do sound important. What I was referring to was working with our 1.3 million members and their grassroots efforts to make sure they are effective. Here at the national headquarters, we work with 1,200 local associations and 50 state associations (plus the territories), so we’re able to keep tabs on what is working in one state, for example, or not working somewhere else. A lot of localities are now trying to raise property taxes, and we’re able to advise them on the most effective tactics their counterparts are using somewhere else. We’re working against raising property taxes, but we’re also working on the positive side to establish the equivalent of college savings accounts for first-time homeowners. We want them to be able to contribute to something like a 529 account so that as long as they use it to buy their first house, they can take the money out tax-free.

In your advocacy work, what strikes you as important for other public affairs professionals to know?

What I find is that in this highly partisan atmosphere, when the Democrats all vote one way and the Republicans all vote the other way, the number of elected officials who really can be influenced is shrinking dramatically. Members of Congress get millions of emails a day, and those are important. We send emails to Capitol Hill as well. But what is really important in this environment are personal relationships. For every member of Congress, NAR has a key contact or federal political coordinator (FPC). That’s one person in every district who really knows the member and can actually get them on the phone and make the case for the policy we favor, and have real influence. Sometimes it’s a person who sold them their house or who lives next door. We have one FPC who has coffee one morning a week with the member and has done so for 20 years — before that member was ever elected to Congress. That’s someone with influence.