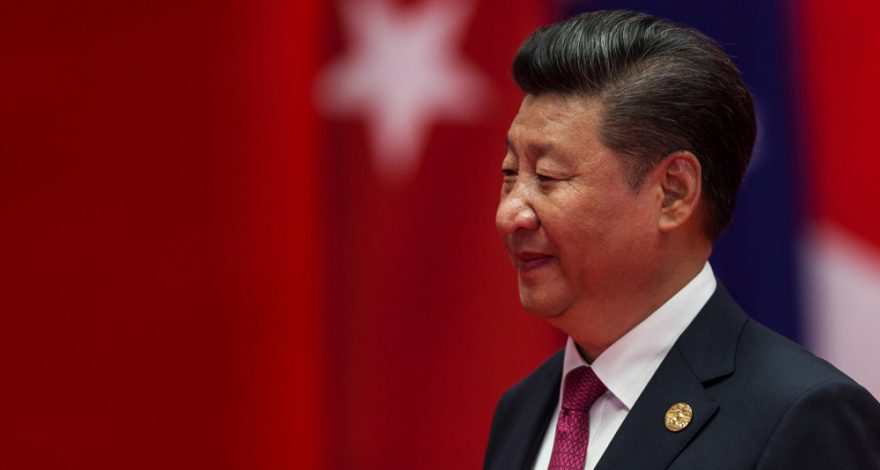 Beijing’s response to U.S. concerns about the security of President Trump’s Apple iPhones was not what longtime China watchers expected.

“If they are really very worried about Apple phones being bugged,” the Foreign Ministry spokesperson said in late October, “then they can change to using Huawei,” which is China’s leading telecommunications brand.

The remark was not only surprising but, “frankly, kind of hilarious,” says Elizabeth C. Economy, the C.V. Starr senior fellow and director for Asia studies at the Council on Foreign Relations, a distinguished visiting fellow at Stanford University’s Hoover Institution and the author, most recently, of The Third Revolution: Xi Jinping and the New Chinese State, published by Oxford University in May. “This was a rare demonstration of humor on the part of the Chinese leadership.”

The response also suggested mounting confidence — maybe even arrogance — on the part of Xi’s regime. American opinion makers are rightfully indignant about Russian meddling in American elections, which represents a genuine concern. “But the greater long-term challenge, by far, comes from China,” says Economy, who spoke at the Council’s Fall 2018 Board Meeting in Marina del Ray, Calif., in mid-October. 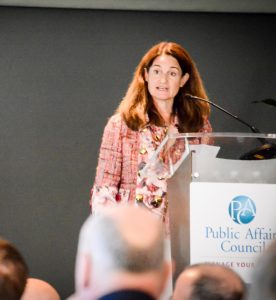 “It is certainly true that what the Russians have done in terms of direct intervention in the U.S. political process to destabilize our campaigns and our election is vastly worse than anything China has done,” Economy says. “The administration likes to mention what it regards as China’s efforts in this direction, but the best evidence so far is that it amounts to nothing more than a paid insert in the Des Moines Register telling farmers there that the trade war is not good for their interests. And that’s something the farmers of Iowa already knew.”

Even so, the scope of China’s ambitions is global, while Russia’s are largely regional. While Russian President Vladimir Putin seems determined to restore what he regards as his country’s role as a great world power, Economy says “his chief interest is in carving out segments of the Middle East and Central Asia as well as regaining some control over the former Soviet republics.”

China, by contrast, is committed to a long-range mission — and has a plan to achieve it — that is daunting. “In that sense, Russia is not playing in China’s league,” Economy says. China has used trade as a tool of empire going back thousands of years, and its so-called tribute system lasted for centuries. While the imperial ambition burned more brightly in some periods than others, it has never been extinguished and is now heating up. “They are pursuing control of the South China Sea, Hong Kong and Taiwan,” Economy says. “China now controls something like 76 ports in 35 countries around the world.” China’s Belt and Road Initiative, unveiled in 2013, seeks to connect Asia with Europe and Africa.

More than that, Xi has a clear vision of the role that fiber optics and the internet are to play in its global mission and has officials training leaders in Africa in how to implement this strategy. China has its own understanding of the way human rights is to be defined in the world order it seeks to establish. It is also investing heavily in robotics, banking on their importance for decades if not centuries to come. Xi’s “Made in China 2025” economic initiative, Business Week reports, “aims to displace the U.S. as the world’s technological power, while another plan calls for dominance in Artificial Intelligence [AI] by 2030.”

China has the capacity — at least on paper — of achieving some of its goals. Its population of 1.4 billion, compared with 326 million in the U.S., leads the world, and it has the world’s largest active-personnel military, boosting its defense spending, according to the Stockholm International Peace Research Institute, to $228 billion last year. “China’s economy is immense, and it is a huge trading partner,” Economy adds.

But there are countervailing forces as well. Dinny McMahon, the author of China’s Great Wall of Debt, a book published about the same time as Economy’s, challenges the “air of inevitability” that seems to accompany talk about China’s rise. “If you look under the hood, so to speak, you will see that China’s economy is really a lot more fragile than most of us assume,” McMahon argues.

Economy sees some truth in that assessment. “There’s no doubt China faces great internal challenges,” she says. “There is immense corporate as well as government debt, plus a rising level of household debt. China was making some efforts to deleverage over the past 18 months or so, but the pressure from the trade war put a stop to that.”

There are also great demographic challenges. “Forty percent of the Chinese people still live on $5 a day or less,” Economy notes. “These are people who have never achieved middle-class status. They are uneducated and unskilled, and there’s a real question of how robotics and AI, which China is aggressively pursuing, will affect this population.”

Labor strife, related to modernization efforts, is also increasing, which points to another serious problem for Xi and his regime. “Labor protests have doubled in his time in office,” she says. “Social disruption in general is an issue. All this points to the fact that Xi has achieved a significant level of institutional power — or political power — but there are also great pockets of social discontent from people who question his legitimacy.”

But Xi’s time in office will represent only a small fraction of China’s long history. “This is something liberal intellectuals and economists who contact me often seem to forget,” Economy says. “They assume that American engagement with China has ‘failed,’ and the door has closed.” They look back to the normalization of relations with China that began under President Richard Nixon in 1972 and was fully established in 1978, after years with no diplomatic relations, and assume this effort has been undone.

This gloomy assessment for U.S.-Chinese relations overlooks how much change has already occurred as a direct result of engagement with the U.S. and the rest of the world. “Civil society in China has been reshaped in profound ways because of relations with the U.S. and the West — the rise of NGOs in China, of an environmental movement, of a women’s movement and even an LGBTQ movement,” Economy says. “For all its economic problems, hundreds of millions of people have been lifted out of poverty thanks to China’s integration into the international economy. The idea that all of this progress has ended is premature. It is a mistake to underestimate the efforts of all the people in China who are working for change.”

Webinar: The Rise of China and Global Business