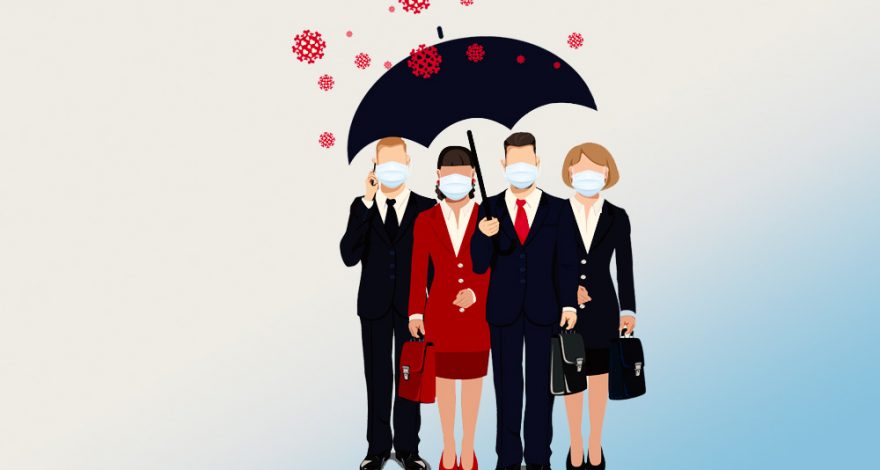 It was back on March 13 that Holland & Knight announced the launch of its COVID-19 Response Team, making the international law firm’s Washington office seem to have something akin to ESP. “We were ahead of the game,” says Rich Gold, who leads the firm’s Public Policy & Regulation Group. “Things were only beginning to be shut down.”

But this wasn’t the firm’s first rodeo. “We’d been through 9/11, and we’d been through the post-2008 recovery, so we had a good idea of how to respond to the current situation, especially with our expertise in financial services,” Gold says. Holland & Knight also has a local government practice team that represents 12 of the country’s largest cities, so it is well equipped to help in those areas as well.

“We don’t do a lot of lobbying per se,” Gold says. “Probably 90% of what we do is policy expertise and the practice of law. And we’re helping clients in the roughest time they will probably ever experience, where every decision they make feels like a make-or-break decision for their organization.”

Holland & Knight has added more than 20 clients since mid-March, which is a 12% to 15% increase for the firm. Stats like that have made for a plethora of articles about how public affairs firms are — the story goes — enjoying what Politico calls a “lobbying bonanza.” Time calls it “a giant windfall.”

The pandemic “might have shut down much of the American economy,” The Wall Street Journal reports, but in Washington, thanks to the stimulus package, “business is booming for the influence-peddling business.” Companies and interest groups “are snatching up lobbyists and regulatory experts,” in the Journal’s words, resulting in what NPR’s “All Things Considered” calls the “lobbying feeding frenzy.”

“Not all industries have ground to a halt because of the coronavirus,” Ailsa Chang, the NPR host, noted. “Some are kicking into high gear, like the industry of influence — lobbying. Congress recently approved a $2 trillion relief package, and lawmakers are not done yet. So companies and interest groups are hoping big investments in lobbying firms will pay off in federal funding.”

There’s a sense in the coverage that the reader should be alarmed, and even incensed, by the spike in billings. This “surge in lobbying provided another potent example of the power and sway of Washington’s permanent influence industry,” the Associated Press reported, as if the news media itself had no clout.

And there’s no question that organizations need outside counsel to make smart decisions in a rapidly changing environment. Organizations “are snatching up lobbyists and regulatory experts to help them navigate the government bureaucracy for help,” The Wall Street Journal reports, quoting Ed Newberry, global managing partner of the policy and regulatory practice at Squire Patton Boggs, who says that in his 30 years of work he “has never seen anything like the demand for information right now” (emphasis added).

“This a time of great upheaval and great uncertainty, and we’re seeing more and more organizations seeking outside expertise as they try to make wise decisions both in the immediate crisis and for long-term planning,” says Council President Doug Pinkham. “Public affairs professionals are working harder than ever right now, and the ‘boom’ in their business is a reflection of their workload and the demand that exists for their skills.”

During a 90-minute online meeting of members of the American Staffing Association in early April, participants asked more than 1,000 questions about the bailout, and “none of those questions were anything but, ‘Can you tell me what this section of the bill means?’” says Jack Kingston, a former congressman from Georgia now with Squire Patton Boggs, which was hired in March to lobby for the trade group. The American Staffing Association, Kingston told AP, “hired us defensively.”

It is expertise, more than access, that most of these clients are seeking, Holland & Knight’s Gold says. “Our client list might have increased, and we’re working 16-hour days and have been for eight weeks. These are very complex times, and the nature of our work has changed. Often, it is just a matter of a client who faces a big decision [based on what is going on in Washington] and wants an hour of our time just for us to help them think through a particular situation. This isn’t about our putting in a call to someone hoping for some special treatment.”

Elizabeth Baker, government affairs director of the Air Line Pilots Association, International (ALPA), says her workload and that of her colleagues have increased, too. “Just because the economy is shut down doesn’t mean our work has stopped,” Baker says. “I work for an industry that has been hit really hard and for an organization whose members have been hit really hard. We were working 24/7 on the CARES Act [relief package] and figured we might get a breather after that passed, but things haven’t slowed down at all.”

Like so many such associations, ALPA had its 2020 legislative and regulatory priorities all planned out when the pandemic hit and the economy shut down. “And when we had to shift our focus, it wasn’t like we were expecting smooth sailing,” Baker says. “We like to be proactive, but we have to be reactive, too, ready to respond to whatever might pop up in Congress, and we have had to do a lot of that. We had just weathered the government shutdown, and then we were dealing with the grounding of the Boeing 737 Max.”

Last year, Baker says, “our No. 1 focus was the five-year FAA reauthorization bill, and we were transitioning to implementation and oversight of its provisions. But now our main priority is the health and safety of our members and of airline passengers, because public confidence in air travel is the only way to protect this industry.”

Presidential election years are usually fairly quiet, Gold says. They are times in which an administration is finishing work from its first term, and public affairs professionals are gearing up for a second term or preparing for a new administration to take office.

“If you’d told us in January that by April, Congress would have passed a $2 trillion stimulus package, we’d have laughed — not at the pandemic, of course, but at the possibility of any such legislative possibility,” Gold says. “And we’re now on our fourth bill. The CARES Act is something that has never been done in the history of this country, and we’re working on Title 4 and the small-business loan and debt relief programs.”

Resource – Considerations for Lobbying and Government Relations During COVID-19