CTIA’s Sarah Yi Is Volunteer of the Year 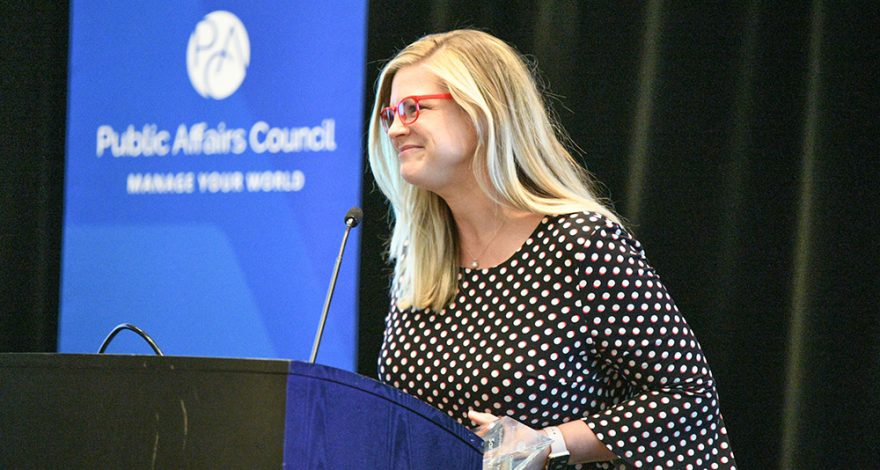 CTIA’s Sarah Yi Is Volunteer of the Year

For five years, Sarah Yi, the director of external affairs for CTIA, worked for the late John McCain. The Arizona senator and former presidential candidate died 10 years after Yi left his office, but his influence over her life lives on.

“Something I took away from my experience working for Sen. McCain was his belief that we have a lot more in common than the things that divide us,” says Yi, who is the Council’s 2019 Volunteer of the Year.

“He also believed that we should always do service in causes greater than ourselves. I came away agreeing that these are convictions we should all aspire to and emulate in our own lives and careers. We should always be giving something back.”

Yi has personified that understanding in her work with the Council, where she has been an active contributor. She is a frequent and popular Council speaker and has helped shape its major conferences, not just while at CTIA, the wireless communications industry trade association, but also when she was employed by Edelman.

Her participation has accelerated in recent years. Since 2017, she has either spoken at or attended 10 workshops and conferences, and she is a member of the Council’s Political Involvement Network, Association Network, International Network, and Digital Media and Advocacy Summit Advisory Committee.

“My approach to these activities, I’d like to think, isn’t just part of some effort to advance myself in my career,” Yi says. “Again, that might reflect what I learned working for Sen. McCain. I believe in networking but in a very broad sense. I’ve always tried to reach out to speakers or just attendees who seem to have something compelling to say and develop those relationships. The one-on-one connections I have made in an informal way at these events are kind of amazing.”

A graduate of Arizona State University with a master’s from the Naval War College, Yi has always prided herself on her ability to communicate with individuals from diverse backgrounds and opinions and who represent organizations across the political and cultural spectrum. Washington “isn’t like the rest of the country,” she said in an interview with Impact in May 2018. She explains that you don’t find the same sense of community that you would in “most other places in America.” There people can hold different opinions, but they are neighbors, and they share a lot of values that don’t have a lot to do with politics, according to Yi. But Washington isn’t like that.

A feeling of community still prevails in most parts of America, despite what Yi concedes is an “unusual and highly polarized time. That’s why I enjoy working on grassroots campaigns and why they are so important. They depend on local connections, and I enjoy helping others plan and execute those campaigns.”

Yi approaches networking with the same commitment to establishing authentic connections. “Maybe I think of networking a little differently than some people do,” she says. “But the biggest benefit I’ve seen from my volunteering with the Council — and with participating in Council programs generally — is the connections I’ve made. It’s important to make these connections and to serve, not just to meet people who can help you, though I understand why people do that. But when you devote yourself to any worthy cause that is bigger than yourself, you simply become more aware, period. You have to open yourself up, and when you do that, then you see the rewards.”

Yi’s “selfless attitude toward her volunteering in Council programs, and especially her willingness to counsel our members in the art of building effective grassroots programs, makes her a very deserving recipient of this award,” says Caryn Seligman, the Council’s senior director.

The Council has honored a Volunteer of the Year since 2008. Bestowed at the Fall Board Meeting each October, the award recognizes recipients’ contributions not just to the Council but to the larger public affairs profession as well. Previous winners are: