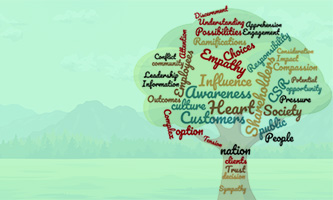 The first several months of 2016 were tense ones around the world, especially for those who work at the Mayo Clinic, based in Rochester, Minn.

The Zika virus scare was in full force, followed by terrorist attacks in Brussels; Lahore, Pakistan; and Nice, France. In April, the rock star Prince, a Minneapolis native, was found dead in the next county, and in June, the Orlando, Fla., nightclub shooting took place near Mayo Clinic’s Jacksonville facility.

“We have international staff and patients, and Prince of course was a beloved figure worldwide but especially here in Minnesota,” says Amy Davis, Mayo Clinic’s division chair in communications and public affairs. “And we have a lot of LGBTQ staff and patients in Jacksonville and nationwide.”

In simpler times, Mayo would sometimes light its buildings in Rochester in different colors to observe holidays, raise awareness of different diseases or recognize veterans. But during that summer of 2016, things changed.

“We flew our flags at half-staff after the explosion at the Brussels airport,” Davis says. “But we soon realized that the requests for us to commemorate this or that event, or show solidarity, just became too much. Maybe that is because we are a mission-driven humanitarian organization with a global reach, and compassion is one of our core values. We are an organization with a heart. We take care of our people and our patients. But the requests were coming so frequently that we realized our old general guidelines — which weren’t very specific — weren’t good enough anymore. We needed to develop a new way of making decisions about what we should or shouldn’t do, and what we could and couldn’t do. You can’t do everything.”

But Mayo Clinic can do a lot. After the Orlando shooting, for example, the clinic lit its buildings, hosted an event for employees and sent a note to members of its LGBTQ group, one of its Mayo Employee Resource Groups, or MERGs. “MERGs are employee-organized groups that form around a common dimension of diversity,” Davis says. “MERGs may focus on traditional diversity dimensions such as ethnicity, age and gender. They may also include such groups as veterans, people with disabilities and emerging leaders.”

One decision was fairly straightforward. When Prince died, even though a number of organizations in Minnesota did a great deal to recognize its native son, Mayo Clinic decided against any response. “If we did,” Davis says, “people would speculate about whether he was a patient of ours, and patient privacy is sacred to us. These are the kinds of things you have to take into consideration when deciding whether to engage or how to engage.”

To help make informed decisions about when to act and when not to — whether to confine communications within the company, for example, and when to go beyond it — Mayo Clinic developed an impressively thorough internal process. This includes scorecards and worksheets in which participants can rank possible impacts on different stakeholder groups, how well a given action might be aligned with the company’s mission and values, and even how credible and relevant a response from the company might be.

Included with the scorecards are questions. “Does our mission compel us to respond?” for example, or “Is it relevant to all Mayo sites or just one or a few?” Answers are tabulated (scores of 95 and above indicate that a company response is “appropriate”), but the nature of that response is open for further discussion. The scorecard is designed to stimulate and inform the conversation that follows, not to dictate corporate behavior. “It is a tool,” Davis says.

Mayo Clinic’s scorecard and comparable processes used by other organizations represent forms of “decision trees,” a term borrowed from fields other than public affairs but growing in popularity within the profession. “The term itself comes from the work of ‘brainiacs’ from the worlds of artificial intelligence and machine learning,” says Ron Evans, principal consultant of Group of Minds Inc., of San Jose, Calif., whose clients have included the Victoria and Albert Museum in London and Stanford Live.

“A lot of nonprofits like those I work with use what they call decision trees, although they don’t use the same rigor that a tech company considering a software upgrade might when it calculates possible risks and rewards,” Evans says. “Nonprofits try to take what they can from these approaches — they just don’t do the math.”

Evans calls it “a liberal arts approach borrowed from a much more complex discipline, where what you are doing is trying to think systematically about the options you have and possible outcomes of each. They have to do a lot of guesstimating, and there is much less accuracy in the outcomes if you cannot really determine the possibilities. But it is still a valuable exercise and an important development in how organizations make decisions.”

The study of decision making is itself fairly recent, at least when it comes to business. First applied to risk management, it is a “palimpsest of intellectual disciplines: mathematics, sociology, psychology, economics, and political science,” according to the Harvard Business Review, pushed forward in recent decades by “advances in technology that support and mimic cognitive processes.” Not so long ago, the risk management toolkit “consisted of faith, hope, and guesswork,” and little more. (But as late as April 2005, Christie’s won the right to handle a Japanese company’s $20 million art collection by beating Sotheby’s in a game of rock-paper-scissors.)

This matter of making strategic decisions has become more complicated in recent years, as organizations feel the need to address issues that even a decade ago would not have required any response at all. Companies generally avoided weighing in on “social issues,” which were often considered irrelevant to the bottom line. “But today people want to deal with organizations that stand for something,” Davis says. Some of the pressure comes from employees — or a simple recognition of employees and their needs, wishes and values, and changes in thinking at the highest levels.

As late as 2015, for example, ExxonMobil received a “negative 25” score on the Human Rights Campaign’s Corporate Equality Index, which ranks companies on how they treat LGBTQ employees. But two years later, the company formally opposed Senate Bill 6 in Texas, which, like an earlier North Carolina law, would have required transgender people to use bathrooms in public buildings based on their sex as listed on their birth certificate rather than their current gender identity.

“Our employees are members of a larger society, and we need to reflect that,” says Gemma Allman, ExxonMobil’s public policy manager. “The challenge is getting these decisions right and being authentic, so the position we take as a company makes sense to the public.”

In its desire to take positions that are “authentic,” ExxonMobil has developed its own procedures. “We have done a lot of research on how best to engage on these issues,” Allman says. “We have assembled a leadership group that calls on subject matter experts as needed from various parts of the company — HR, legal, tax, to make sure we have a range of inputs and points of view.”

Pfizer also opposed the bathroom bill in Texas and its predecessor in North Carolina, for reasons similar to ExxonMobil’s. The pharmaceutical company distributed letters opposing the measure, citing the company’s “significant presence” in North Carolina and its belief that “our LGBT patients and colleagues deserve to be treated equally and with dignity.”

“We have employees in North Carolina and Texas,” says Marc Scarduffa, Pfizer’s vice president of government relations and public affairs and the Council’s chairman. “We’re a pro-LGBTQ company, so we didn’t feel under any particular pressure to take this position, and we were out front on this issue.”

That should come as no great surprise. For 14 years in a row, Pfizer has earned a “100” ranking — a perfect score — on the Corporate Equality Index.

Although taking a position on the bathroom bills came naturally to Pfizer, the company does have a formal process for reaching such decisions on social-issue engagement. “We have a corporate affairs leadership team — which includes HR, communications, philanthropy, government relations, policy and business unit liaisons — that meets to go over these issues and make recommendations to the CEO and Executive Leadership Team,” Scarduffa says.

ExxonMobil’s process requires that members of the leadership team examine issues not as a reflection of their personal opinions but with an awareness of what makes sense for the company. “We try to figure out what an issue is really all about,” Allman says. “Issues are never about only one thing.”

Part of the challenge is trying to get a grasp on the possible ramifications of a particular decision for different constituencies — on employees, customers, shareholders, business partners and potential business partners.

“We don’t agree on every single issue with some of the trade associations we belong to,” Scarduffa adds. “We’d rather work internally for change rather than dropping out and having no influence. Recently Pfizer partnered with others to encourage the Chamber to explore opportunities to collaborate on sustainability issues. To that end, the Chamber has hired a new Vice President of Environmental Affairs and Sustainability.

Companies can expect criticism when it takes a position and when it doesn’t. “As a green company, Pfizer has taken some flak from various sectors for its continued membership in organizations considered by some to be insufficiently committed to combating climate change,” Scarduffa says. Critics have pressured the company to resign from the American Legislative Exchange Council (ALEC), for example.

A letter to critics from Margaret M. Madden, Pfizer’s senior vice president and chief governance counsel, states the matter forthrightly. “We disagree with ALEC’s position on climate change,” it says. Even so, Pfizer “firmly believes that we are more effective in affecting policy on climate change at ALEC by strongly advocating for our principles from within the organization rather than from the outside.”

On climate change, just as with its commitment to diversity, Pfizer has earned high marks from an important outside monitor of its performance. The CDP — formerly the Carbon Disclosure Project — has praised the company for its track record of carbon emissions reductions as noted through a decade of relatively high CDP ratings.”

Don’t expect such pressure to let up, or that critics are easily won over. “Part of our challenge was getting so many requests to take positions on issues because there are a lot of worthy causes out there, and emotions can run high,” says Mayo Clinic’s Davis. “You need to know not only what stakeholders want you to do, but what you can do — what’s in your toolbox. This can be emails from leadership, educational sessions, social media posts or even lighting up our buildings in different colors.”

“It can be easy to do too much or too little. You don’t want to just be responding on the basis of emotion, and that is why it is important to have some formal process — some ‘decision tree,’ if you want to call it that — for making these determinations.”

Americans Want Local Leaders to Step Up on Climate Change