Americans, we’re always told, are the most generous people in the world. We not only give voluntarily to charitable causes, but we also make sure our neighbors contribute to the welfare of our fellow citizens, whether they wish to or not — through taxes.

In The High Cost of Good Intentions: A History of Federal Entitlement Programs, John F. Cogan looks at how government programs inevitably expand, covering far more beneficiaries than originally intended. Cogan is a professor at Stanford and a senior fellow at the Hoover Institution.

We tend to think that “big government” domestic programs designed to help needy Americans started under FDR’s New Deal and were given a second boost under LBJ’s Great Society. But you say such programs actually date back to the very founding of the nation.

That’s right. I trace the origins of what I call the Entitlement State right back to the Revolutionary War. That’s when Congress adopted a program to provide benefits for soldiers disabled in the war. The program was narrowly restricted. The only beneficiaries were to be soldiers and sailors who served in the Continental Army and Navy, and their widows. But it was not for militia members or those who enlisted in the armies raised by the states.

But it didn’t stop there?

Not at all. Within two decades, the program was expanded to include militia and state-level volunteers who had been disabled, and their widows. Ten years after that, it was expanded again, so that you didn’t need to have been disabled. Now any veteran “in need of assistance”—meaning of low income—could receive benefits, whether or not your situation had any connection to your wartime service.

And then it ended?

No. In 1832, the program was expanded yet again, this time to include anyone who had served at least nine months during the Revolutionary War. The name of the law that expanded the program, appropriately enough, was the Universal Service Law. What’s so interesting in the story of this early entitlement program is that we see the same pattern of expansion in virtually every other benefit program.

Can you describe the pattern?

There are four characteristics. First, all the expansions are incremental in terms of both eligibility and the level of benefits. Second, each expansion tends to be permanent. It is only repealed under extraordinary circumstances — and I will give you an example in minute. Third, each expansion creates the basis for further expansion down the road. Fourth, Congress fails to factor in the extent to which the program provides incentives for people to modify their behavior precisely to become eligible to receive a benefit. 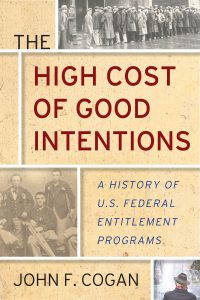 The way you describe this pattern seems to suggest it is inevitable.

It seems to be inevitable. There’s a kind of internal logic and momentum, almost a kind of natural law in operation. These programs emerge from our well-intended desire to treat people in similar circumstances equally. So each expansion includes a new class of people who come very close to qualifying under the original arrangement, under the more restrictive rules. In the case of the Revolutionary War, you’ll remember, people who served in militias were excluded, but because their circumstances were very similar to those of the Continental War veterans, we felt they too should be included. Each time, in that case and under subsequent federal programs, Congress expands the class of beneficiaries to include the “equally worthy.” But each expansion creates yet another class of the barely excluded.

How about the budgets of these programs?

There’s a kind of logic operating here as well. Every time there is an effort to increase a program’s budget, a baseline of growth is established, and what a colleague at George Mason University calls “the tyranny of the baseline” kicks in. That means any reduction is the anticipated baseline of growth — even if it actually increases the program’s budget—is denounced as a cut. A “heartless cut,” at that, when all that is going on is an attempt to slow the rate of growth.

What, then, can be done? Has an entitlement program ever really been cut?

Remarkably, yes. And it was FDR who did it. We forget that he campaigned for president on a pledge to reduce federal spending. In his first year in office, he managed to reduce the beneficiaries of war veterans by $400,000. By this time, veterans were receiving benefits for service in all American wars, whether they had been disabled or not. FDR argued that the fiscal crisis were so severe that we could no longer afford these payouts, and that Americans were citizen-soldiers, so if they came out of a war unscathed, society owed them nothing. There were howls of protest from veterans groups, but FDR prevailed by the power of his argument that deficit levels were ruinous. But a cut like this — the greatest single reduction in U.S. history — cannot be done without presidential leadership. FDR vetoed half a dozen efforts to overturn the changes he made, and while he compromised here and there, his cuts were still made.

Yes, Jimmy Carter is widely regarded as a “weak” president. But in 1977, he got through Congress a serious reduction in Social Security benefits for future retirees. People who were already receiving benefits wouldn’t see a reduction, but those who were 60 that year would see their benefits cut by 10 percent when they retired, and those who were 59 would see a 14 percent cut. Again, though, presidential leadership was required. Carter made a persuasive case that the Social Security system was nearing insolvency and would reach insolvency six years later. So it can be done.

It’s a tough argument to make, especially at a time when people in communications are told to “tell stories” to make a case — and it isn’t hard to find moving stories of people who will suffer when they lose their benefits.

That’s difficult. You have to make complicated, reasoned arguments — and it is impossible to find the “victim” of something that would happen if a reduction doesn’t take place. But as we’ve seen under FDR and Carter and, with welfare reform, under Ronald Reagan and Bill Clinton, it can be done.