How to Escape PowerPoint Captivity 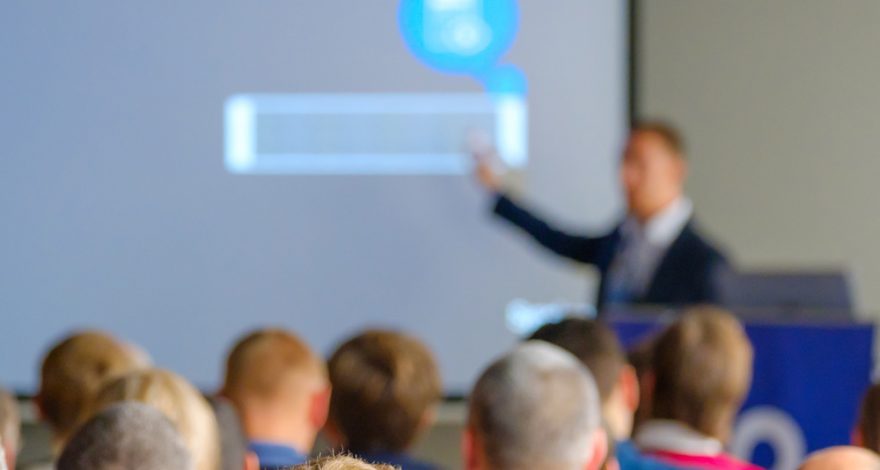 How to Escape PowerPoint Captivity

Fast Company offers useful advice for liberating yourself from PowerPoint. That more and more communications experts are issuing similar counsel is pretty good evidence that there’s a need for it

This alone is worth committing to memory: PowerPoint is a valuable tool “when used to do what it was designed to do: create visuals to accompany spoken words.” What it was not meant for was producing “busy, text-dense, bullet-pointed monstrosities” that a presenter reads with their back to the audience.

Unfortunately that’s what too many of us do. Microsoft estimates that by late 2017, there was one copy of PowerPoint for every seven people on earth, with 200 million used in any given month. Berkeley reported in 2005 that 30 million PowerPoint presentations are made every day. That’s a lot of bullet points. There are far more bullet points on any given slide than most of us can read. Also, we’re using the term PowerPoint here in a generic sense, which means there are an awful lot more bullet points out there in the literate universe. PowerPoint, first released in 1987 for the Apple Macintosh and soon after bought by Microsoft, has become “the Kleenex or Scotch Tape of presentation software,” IEEE Spectrum notes, meaning “any presentation created with software,” and projected on a screen.

PowerPoint is “the Rodney Dangerfield of software: it gets no respect,” according to one Berkeley engineering professor. But the blame for that is on the presenter, not the software.

David Byrne, the former Talking Heads front man, is a big fan, using the program to merge music and images, but recognizes the problem so many people have with it. They use too much text — usually in the form of bullet points — and the text becomes a crutch for them but an annoyance to the audience. It seems obvious, but people can’t read and listen at the same time; the brain isn’t made that way. You should never have more than seven bullet points on a slide, Byrne told a Berkeley audience back in 2005. “If you can’t edit it down to seven,” he says, “maybe you should think about talking about something else.”

Of course, some experts say do away with bullet points altogether. Telling stories, for example, requires no slides at all. It was with that understanding in mind that Jeff Bezos banned PowerPoint at Amazon’s executive meetings. There participants are required to sit in silence, reading and later discussing a six-page memo that Bezos describes as “narratively structured with real sentences, topic sentences, verbs and nouns.”

Bezos told a Forum on Leadership at the Bush Center in early 2018 that he has come to prefer anecdotes to metrics — and it’s metrics that are most likely to appear on presenters’ slides. Amazon uses “a ton of metrics” to quantify its success, he said, but when anecdotes from customers seem to disagree with the metrics, “the anecdotes are usually right.”

For those of us still stuck, for whatever reason, with slides and bullet points, Fast Company offers a few tricks to lighten the load for our audiences but also for ourselves. We should use fewer words per slide, increase the font size and add more pictures. Use more stories, as Bezos prefers. Stories are more persuasive and memorable than metrics, and they can’t be told with bullet points.

Effective communicators, after all, understand that the attention should be on them — their tone of voice, their facial expressions and the gestures they use to convey the message — and not on the words printed on a slide. That means that, from time to time, they might need to get their attention back where it belongs.

“An incredibly easy way to instantly shift the focus back to you is to press the B key in a presentation,” Fast Company says. “It works in any presentation using PowerPoint or Keynote. The screen will go black (B is for black, so you can guess what the W key does). The audience suddenly has nothing to look at on the screen and their attention will turn to you. Press any key after this and the slides will reappear. Use this in any presentation when you see their attention wander.”

And the fewer words on those slides, the less temptation there will be for you to let them do the talking, which they can’t do anyway. “That frees you to look at the audience rather than staring at the slides,” Fast Company says.

Your Audience Will Thank You

But the best way to liberate yourself from PowerPoint captivity is to know your material so well you don’t need the crutch of slides at all. If you want to develop a theme step by step, Fast Company says, use a whiteboard “to sketch out ideas piece by piece, and maybe use a few handouts for any supporting data or figures. Your audience will thank you. There are very few people out there who think the world doesn’t have enough PowerPoint.”

And remember. PowerPoint, like any presentation software, is just a tool. Whether a tool is used well or used poorly depends on the person who uses it.