How to Manage a Crisis Without Public Trust 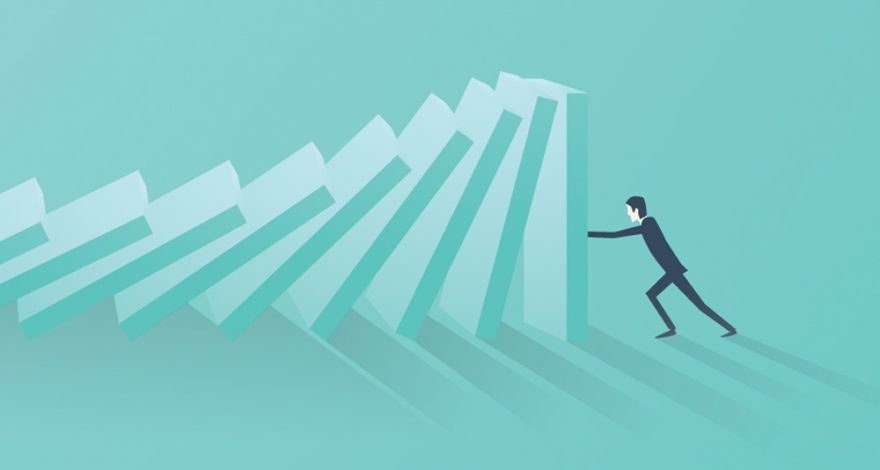 How to Manage a Crisis Without Public Trust

As business and political leaders face the health and economic impacts of the COVID-19 crisis, management advice is available from the likes of McKinsey, the Center for Creative Leadership, and the Harvard Business Review. Some of it is tactical: Form teams, hold daily briefings, find reliable information sources. But much of it is stylistic: Trust your staff, be accessible, live your values.

A popular leader can follow such guidance to calm employees or the public, give them instructions and inspire them. But what do leaders do if they are unpopular or if public trust declines? How well will their playbook work when — as the 2019 Public Affairs Pulse survey revealed — only 6% of Americans think CEOs and Washington politicians are highly honest and ethical?

Before you can persuade a skeptical audience to take necessary action, you have to establish credibility. If you can’t do that, nothing you say will matter.

Most of the crisis communications advice offered by management consultants and business publications is actually quite good when compared with popular posts offering “Top 3 Crisis Tips.” What some experts lack, however, is an appreciation of context: What’s your reputation? How well have you dealt with previous crises? Does this crisis play to your strengths or to your weaknesses?

Leaders need to be positive, but not too positive
It’s always better to be candid than to sugarcoat bad news for fear of panicking the public. McKinsey calls this nuanced approach “bounded optimism,” or confidence combined with realism. In fact, research shows the public generally doesn’t panic when confronted with serious threats. (Panic-shopping for toilet paper doesn’t count, because it is an act of overzealous stockpiling, not uncontrollable fear.)

When we level with employees and the public, we get their attention and keep their expectations realistic. While it’s true that leaders who speak the truth will have opponents accuse them of overreacting, many others will appreciate their courage. Whether a straight-talking leader is running a company or the federal government, he or she is likely to attract a following as the crisis becomes more challenging.

Talking points are not a strategy

Every good communicator has key talking points. But leaders ought to focus less on what they’d like to say and more on what stakeholders need and want to hear.

“Rather than just telling stakeholders what you’re doing, ask them how your organization can help them accomplish what they need to accomplish during this crisis,” said David Demarest, former White House director of communications under President George H.W. Bush and now a lecturer in organizational behavior at the Stanford Graduate School of Business. Demarest, who recently retired as vice president for public affairs at Stanford, was interviewed in a recent issue of the business school’s Insights publication.

“Instead, solicit a deeper level of engagement,” he said. “Tell them, ‘If you have ideas about how we can better serve you, please let us know. If there is an issue that you think our company could help your community address, tell us about it.’”

Communications professionals also need to help their organizations understand why people are afraid and how cognitive biases cause irrational beliefs. Research on risk perception shows that people are disproportionately afraid of risks that are unfamiliar, man-made, imposed on them, gruesome, from a distrustful source, without positive trade-offs, and that personally affect them. The COVID-19 crisis triggers many of these fears.

Meanwhile, social scientists have identified over 100 cognitive biases, from anchoring (the tendency to rely too heavily on one piece of information when making decisions) to confirmation bias (the tendency to process information in a way that confirms one’s preconceptions).

With all of this background “noise” going on, it becomes especially difficult for leaders, especially untrusted ones, to persuade the public to listen. That challenge prompted a group of 43 leading academics to collaborate on a recent article called “Using Social and Behavioural Science to Support COVID-19 Pandemic Response.” They concluded that the most persuasive messages are ones that:

It also helps to use the collective “we” when talking about the way forward. This approach keeps the leader from sounding like the public’s savior and underscores that everyone is facing the same challenge together.

The third major strategy for overcoming skepticism is to demonstrate both compassion and courage. Allow others to stand in the spotlight — employees, customers, government scientists, health care workers. Profile stories of dedication and heroism, and tell stakeholders how to support such efforts. Give the credit to business and government partners as well as local communities — anyone but yourself. 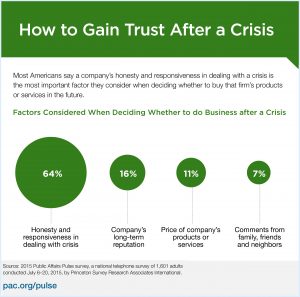 It goes without saying that effective leaders express sincere regret for loss of life. But also, if they are partly to blame for the crisis or for their poor response, they never hesitate to apologize (even when their lawyers warn them about doing so). A 2015 Public Affairs Council study showed that a company’s response to a crisis is even more important for future business than its long-term reputation before the crisis.

At the same time, employees and average citizens want to see acts of courage — a willingness to take calculated risks and self-sacrifice in order to save lives and jobs. Once again, research shows that doing the right thing is also doing the smart thing. A 2018 Public Affairs Council study tested a scenario in which a company announcing a major layoff also announced that the senior management team would take a 20% pay cut until business conditions improve. The result? Fifty-six percent (56%) of the public said their view of the company would become more favorable and only 22% said their view would worsen.

Leaders in business and government often go into a crisis with the challenge of overcoming a trust deficit. But taking an authentic and responsible approach — even when the news is bad — can give them the credibility needed to manage the situation.

There is also plenty of evidence throughout history to suggest this approach can greatly improve a leader’s popularity. As political strategist Mark Mellman pointed out in a recent column in The Hill, Winston Churchill, George H.W. Bush and George W. Bush saw their ratings soar after facing serious crises. More recently, governors such as Democrats Gavin Newsom of California and Andrew Cuomo of New York and Republican Mike DeWine of Ohio have experienced huge approval increases because of their handling of the pandemic.

President Trump, on the other hand, played down the severity of both the health and economic catastrophes, misled the public about virus testing and his response to COVID-19, and said, “I don’t take responsibility at all” for any aspect of the crisis. According to FiveThirtyEight, between Feb. 4 and May 4, Trump’s average approval rating actually decreased from 43.5% to 43.3%.

While the public’s approval can be fleeting (as Churchill and both Bushes learned), that’s the nature of leadership. Very few men and women in positions of power remain well liked for their entire career, and when they do stay popular, it’s as likely to result from good fortune as from good instincts.

But true leaders aren’t looking for constant, lifelong acclaim; their goal is to do their best to have a positive impact when that impact is needed. And right now, in our companies and in government, we need candor, connection, compassion and courage.

Information Hub – Working through COVID-19 Together