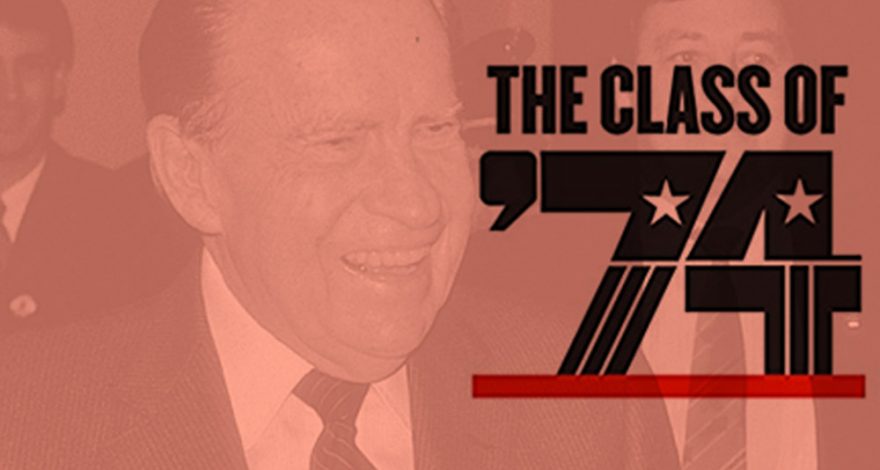 In The Class of ’74: Congress after Watergate and the Roots of Partisanship, longtime congressional aide John A. Lawrence examines the consequences — both good and bad — of reform efforts on Capitol Hill. Momentum to make Congress more open and democratic had been building as the U.S. emerged from the World War II era. But it wasn’t until a group of younger members was elected in 1974 that enough votes could be counted on to make changes to the way Congress did business. The system was improved, Lawrence believes, but the reforms also contributed to the polarization we know today. Lawrence worked on Capitol Hill for 38 years. He worked for Rep. Nancy Pelosi for eight years, eventually serving as her chief of staff.

So who from the class of ‘74 would we still remember?

People still remember George Miller, Henry Waxman, Chris Dodd, Tim Wirth and Paul Tsongas on the Democratic side, and Chuck Grassley, Millicent Fenwick and Larry Pressler among the Republicans. This group was thought of as “Watergate babies,” but I interviewed 40 members of that class and discovered that this characterization isn’t totally accurate.

When most of them made up their minds to run for Congress, back in 1972, generally, Watergate, as we think of it really, hadn’t crystallized as an issue. No one then was talking about impeaching the President. People didn’t know about the famous tapes. All that came later. What I found was that the Vietnam War was actually more of a motivator to these candidates than Watergate was, by far. And this was true of Republicans as well as Democrats. Our involvement in Vietnam was winding down, but we still had a lot of troops there. Even Republicans who tended to support the war as a party realized the war was so costly and divisive that it made it almost impossible for Congress to focus on anything else. Also, there was the energy crisis and the recession. There was a general recognition among those candidates that Congress wasn’t able to tackle some very big issues, and something needed to be done.

But you write that they didn’t come to Washington with the reform of Congress being the main goal.

It wasn’t. Most of these new members weren’t aware of reform efforts for which support was building — like ending the seniority system and breaking up the power of committee chairmen. But once they got to Washington, they became enthusiastic supporters of making the whole committee system more accountable and making Congress more responsive. There was a sense that older members who enjoyed seniority were not responsive to important concerns and that a general housecleaning was in order. And they provided the votes that enabled these efforts to prevail. And by the next Congress, they had removed three committee chairs, and another eight had retired. This new group, at least among Democrats, tended to be liberals, and they could now move forward on issues like consumer protection and Pentagon reform. 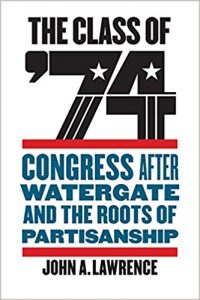 But at the same time some of their efforts to open up the process, as you put it, also had some unanticipated effects.

Yes, they did. The attempt to open up the process to make it possible for more members to fully participate and make the operations of Congress more open to the public did lead to polarization and increased partisanship. The introduction of TV coverage and the recording of votes made the whole process more visible and more divisive and partisan. Because things weren’t done to the same degree behind closed doors, with less deal-making and compromise, members of Congress could be more readily tracked and targeted by the more ideological groups. Compromise, which made getting things done possible, now became suspect.

In fact, you argue that the partisanship, polarization and divisiveness we are dealing with today have their roots back in the 1960s and 1970s.

Yes, I think they did. The reforms in Congress didn’t come about in a vacuum. There were other forces at work that contributed. After the Civil Rights Act, the realignment of the parties in the South took place. The way political campaigns were financed changed as well. Conservative groups learned how to raise a lot of money through direct mail that bypassed what we now call “the mainstream media.” There were fights for control within both parties, which became more ideological than they had been before. Republicans, as well as Democrats, learned to use the new reforms in Congress to their own advantage, as when Newt Gingrich and the Republicans ousted Jim Wright of Texas as Speaker of the House in 1989. They used TV very effectively to argue that Wright was a tyrannical force impeding their efforts in Congress — shutting down the amendment process and all of that.

But for the most part, you see these reforms as positive?

Definitely. It would be hard to argue that the system as it existed before the class of ‘74 came in was better than what we have today. The popular will was not being expressed in Congress before then, and the system wasn’t working properly. It needed to be opened up and the power of the old entrenched committee chairs needed to be broken. The House became a more democratic institution, which allowed issues to percolate up that, before the mid-1970s, would be suppressed by the senior committee chairs. And that’s good.

Another reform you mention is primaries. How has that worked out?

Primaries removed the power of the parties to select nominees in “smoke-filled rooms.” Primaries enabled the voters themselves to choose the candidates. But now they have become mechanisms that allow the most extreme and ideological voters in a district to select the nominee — often, someone who wins a plurality of the 18-20 percent of the party’s registered voters who actually vote in the primary. That means the nominee — once again — is chosen by very few people. If you are willing to compromise, you become a target. If you make concessions to the other side and don’t keep to a hard line, you get “primaried.” But for the most part, the reform spirit that I write about has been a good thing. I’m afraid we’re moving back toward a top-down system, where legislation comes from the leadership and is foisted onto Congress — or it is made by executive order.

We need a return to the Regular Order system, where bills come up through the committees and subcommittees and are debated and are subjected to a lot of hearings. That is how compromise is forced. It wasn’t unusual after the class of ‘74 for there to be two years of hearings on a major piece of legislation. But today legislation too often comes directly from leadership, and members are expected to vote for or against something without it being adequately vetted. Worse than that, policy is set by executive order. One bad effect of that is that major policy legislation lacks broad support or even has a sense of legitimacy about it. You have members forced to vote on something when they don’t even know why.

TARP is a good example, but at least, in that case, there was a sense of urgency, that something had to be done. But this recent tax bill was rushed through with very few hearings, and there are so many problems with it, we are going to need a “clean up” bill just to address all those problems. And this just isn’t right. Members shouldn’t have to vote on legislation the contents of which they cannot know. It’s unfair to them, and it is unfair to the people who must live with the results, including the businesses that have to operate under laws that Congress passed but doesn’t understand.