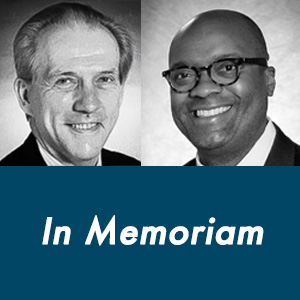 “I like the fact that the kids lose a lot of their games, and then they get better and start winning, but in the end they lose anyway,” McGowen said. “There’s an important lesson there. You can lose, but that doesn’t mean you can’t still achieve important things. You can get better but still lose. And that’s life.”

This former Council board member’s words take on a special poignancy today, as we note with sadness his untimely death, at 47, on March 2. He too “achieved important things” in his life, as a congressional staffer, lobbyist and friend.

“If you met Chris McGowen, you weren’t likely to forget that encounter,” says Sheree Anne Kelly, the Council’s senior vice president. “A larger-than-life personality, McGowen relished the chance to meet people, but he was more than just a social butterfly. He asked probing questions to get to know you, and find a way to help you. A mentor and counselor to countless friends, he can be credited with promotions, new jobs and even introducing future spouses. He had a unique gift where he made so many feel like special insiders in his life.”

Born in Wiesbaden, Germany, the son of a U.S. Air Force officer, McGowan received his bachelor’s degree from Auburn University and worked in the U.S. House of Representatives before joining the staff of the Georgia Chamber of Commerce. In 2004, he moved back to Washington to work for Novo Nordisk. A decade later, he opened the government affairs office of Omada Health and in 2017 did the same for Insulet Corporation. He served as a Council board member from 2007 to 2016 and an executive committee member from 2011 to 2013. The Council is also sad to report the death of another friend, Edward (Ed) Grefe.

An adjunct professor at George Washington University (GWU) and The Catholic University of America at the time of his death, Grefe had been a journalist, legislative aide, corporate public affairs executive and — a honorific bestowed by the Council— “the inventor of corporate grassroots programs.”

“Ed Grefe had big, bold ideas and was always into something new,” says Doug Pinkham, Council president. “Ed was an innovator – for political campaigns, grassroots programs, legislative software and global public affairs. And yet he was also ‘old school.’ He wrote books, he gave lectures, he spoke at universities. He treated the public affairs profession with reverence and contributed a great deal to its emergence as an important management function.”

Grefe worked at the Washington Post before launching the public affairs office of Philip Morris Inc. in 1975, becoming its first vice president for public affairs. In 1997, he joined Legislative Demographic Services, which was eventually acquired by Aristotle International. About the same time be began teaching courses in grassroots politics and managing strategic political issues at GWU’s Graduate School of Political Management. In 2011 he joined the adjunct faculty at Duquesne University’s School of Leadership.

He was the author of two seminal books on corporate advocacy, Fighting to Win: Business Political Power and The New Corporate Activism.

Grefe was a friend of the Council’s, spoke at its events and contributed in countless ways to the advance of the public affairs profession.