You can’t intimidate Katie McBreen. In an earlier life — before she became vice president of communications and public affairs for the National Retail Federation — McBreen worked for then-Vice President Dick Cheney.

She remembers riding in a convoy from Bagram Air Base to Kabul, in Afghanistan, wearing a helmet and a Kevlar vest. She was also, she recalls, “the only woman on the trip.”

So not much fazes her, not even the first months of 2017, when a new and uniquely unpredictable administration took power. “I think that was a scramble for all of us in public affairs,” McBreen says. “Everyone was adjusting to the changes. But by now, working under different conditions has become the new normal.”

And like many seasoned public affairs professionals, McBreen is prepped for another year of surprises. “I think we have to expect the unexpected,” she says. “The biggest tactical challenge for all of us is figuring out the mix of old and new forms of communications to get our messages to the right people at the right time.”

Upcoming elections will also make 2018 turbulent. All 435 House seats will be contested, as well as 34 Senate seats, which includes the special election in Minnesota, and 36 governorships. “It will be all politics and politicking,” says Marc Scarduffa, vice president, U.S. government relations and public affairs for Pfizer and the Council’s Chairman. “Control of the House and Senate is at stake, and both are in play for the Democrats. So a big question for lobbyists is how to move forward in such a highly political year.”

And a contentious one: “I think it will be more contentious, not less,” Scarduffa says. “We have a president who never had a honeymoon, and his popularity has been going down ever since. The Alabama Senate race raises the question of how many more Republicans will distance themselves from the administration. For the Democrats, a perfect storm to retake the Congress is shaping up.”

For companies, a big concern is to what extent President Trump’s high negatives will spread to the Republicans in Congress, if this hasn’t already happened. “Even on an issue like tax reform, companies have faced a difficult challenge,” says Council President Doug Pinkham.

“Historically, Republican administrations have been reliable allies of business and that is often good for corporate employees. But now, if you’ve supported tax reform, which so far isn’t very popular with the public, taking that position might label your company as pro-Trump or pro-rich corporations. Groups of employees may push back if they don’t expect to benefit personally from tax reform.”

Is the GOP Still Pro-Trade?

That difficulty is compounded by the fact that it is no longer clear if Republicans can still be looked at as consistently pro-business. “The emergence of the Bannon wing of the party, with its nationalist, America First attitude, and a president willing to call out individual companies by name, throws all of that into question,” Pinkham says.

He pointed out that most Republican presidential nominees were against funding of the Export-Import Bank and that Trump and others at the White House have openly criticized trade deals, including NAFTA.

David Demarest, vice president for public affairs at the Stanford University and past Council chairman, notes that the administration’s shift from support for free trade is not the aberration. “For several decades, we have seen a deterioration of what had been a bipartisan consensus in favor of free trade,” Demarest says. “This deterioration was fueled by the perception that the net of free trade is negative, as many traditional industries have had to retool and readjust to increased international competition, often with the loss of employment that goes with it. This creates fertile ground for the populist messaging we see today — and the populist anxieties that are felt in our political debate generally.”

If little beyond regulatory reform is accomplished in 2018, the states — and businesses — will be asked to do more. Or they will take on more responsibility of their own volition. “Due to razor-thin GOP majorities, little was accomplished in 2017,” Scarduffa says. “The Republicans thought repealing and replacing Obamacare was going to be easy, and they found out that it wasn’t, and it is hard to believe other big policy initiatives will be much less difficult.”

Scarduffa expects action of some kind on infrastructure, “though we haven’t seen anything in the way of an agenda yet.” McBreen is also monitoring trade and infrastructure, “in part because these are matters Trump campaigned on, and they are important to our members, the retailers.”

Other than tax reform, most White House “wins” have been through executive orders. “The pressure is still on to work with Congress to deliver big, popular legislation,” says Pinkham. “They need to prove that one-party government creates better results than gridlock.”

The White House or the State House? 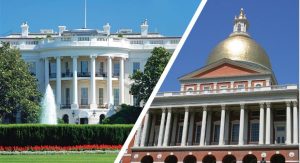 “We’ll see soon enough whether the Russia investigation will make it even harder for Congress to act, considering what a distraction this could be,” Pinkham says. “We’re also seeing an acceleration of issues devolving to the states. In normal times, big policies are set by Washington. But even on infrastructure, Trump said much of the money would come from the states, and many of them are cash-strapped already. This introduces another level of tension in an already anxious climate.”

Companies are anticipating a further shift from Washington to the states and are hiring more state-level lobbyists. “Business would almost always prefer slightly tighter regulations being set by the federal government rather than having to deal with 50 different state laws, with some regulations tighter and some looser,” Pinkham explains. “Nobody wants to have to put out 50 fires instead of just one.”

Adding one more challenge, the re-emergence in recent years of social issue activism — from Black Lives Matter, to more recently, the Me Too movement — means employees might demand that their companies take a leadership position. “Women have really begun to speak up, as they should, which brings a lot of other issues into the open,” says Pinkham. “We see this affecting companies in many ways, not just in how they update their own sexual harassment policies.”

For one thing, corporate employees are feeling more emboldened to pressure their companies about the behavior of legislative leaders who receive PAC contributions, Pinkham says. “Many companies are reviewing their contributions criteria and then publicizing them widely to show employees that PAC donations are given because of a politician’s stance on certain business issues, not because of their positions on social causes,” he says. “In some cases, they are making the conscious effort to avoid certain members of Congress who have become lightning rods for controversy.”

Ironically, a steadily improving economy — a hopeful sign, in every other way — could increase social tensions. “When economic conditions are good, people give themselves permission to think about social and environmental issues,” Pinkham says.

As always, maintaining trust will be paramount. “These are tough times when trust in both government and business is low,” Pinkham says. “One of the challenges here is that while Americans express little trust in business, they expect them to pick up the slack when government fails to act. If millions of people lose their health insurance, will the public expect employers to do still more? At this point, we just don’t know.”

While there is cause for concern, Demarest says it’s important to take the long view. “This is a very resilient, resourceful, energetic and entrepreneurial country,” he says. “Without minimizing the current concerns, we have weathered all sorts of challenges, many of which were more worrisome than what we see today. It is easy to forget, for example, that we’ve just rebounded from the worst economic meltdown since the Great Depression and back in the ‘70s a grave constitutional crisis in Watergate.”

Consumer confidence “is high,” he says, “which reflects, I believe, the sense people have that things will get better. We have been through rough patches before, and there will be rough patches to come. “