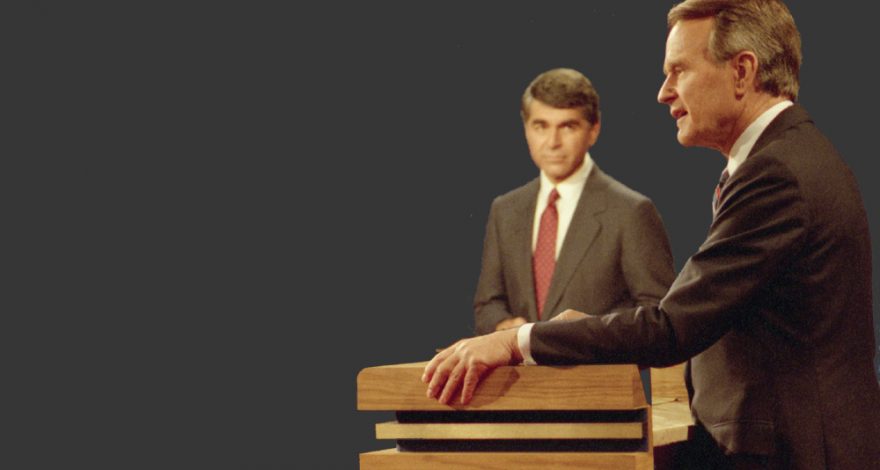 In After Reagan: Bush, Dukakis, and the 1988 Election, John J. Pitney Jr. examines a presidential campaign in an America that seems in some ways unrecognizable. The winner — an Ivy League-educated, Eastern Establishment, World War II veteran — represented a part of the Republican Party that no longer exists. His victory was made possible at least in part by a campaign manager who, as an upstart Southerner, epitomized the GOP’s future.

A professor of politics at Claremont McKenna College, Pitney was a “low-level volunteer” in the Bush presidential campaigns of 1980 and 1988, and during a leave of absence from his academic duties from 1989 to 1991, he served in the research department of the Republican National Committee. There his daily work “consisted mostly of cranking out talking points in support of the 41st president and his policies.”

Pitney says he has a photograph of himself “shaking hands with George H.W. Bush and [he] rode the elevator a couple of times with George W. Bush. But that’s about it.” In 2016, he changed his party registration from Republican to Independent.

The presidential campaign of 1988 was seen, at the time, as a brutal one. In retrospect, it seems quiet and gentlemanly. Can you explain that shift?

George Herbert Walker Bush was pretty tough on Michael Dukakis on crime, and particularly a furlough program for inmates in Massachusetts. People forget what a potent issue crime was then. Between 1960 and 1988, the rate of violent crime quadrupled, and one ad in particular came to symbolize Bush’s attacks on Dukakis’ record. 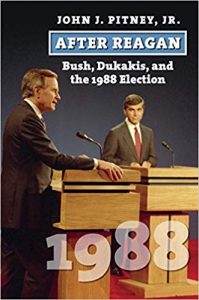 Willie Horton was a convicted murderer in Massachusetts and, during one of his 10 weekend passes from prison, Horton raped a woman twice. His picture appeared in ads, and there was certainly a racial component in the ads. People remember the ads, but two things are also important to remember.

First, the ads weren’t done by the Bush campaign but by an outside group, and second, they’re not why Bush beat Dukakis. Dukakis wasn’t a bad candidate, but he had the bad luck to run against Bush, who had been Ronald Reagan’s vice president. Reagan was popular, and this was a time of peace and prosperity. It was only in retrospect, when Democrats were trying to explain why Dukakis lost, that they decided to blame their defeat on those Willie Horton ads.

Yes, and he was forced to withdraw after being exposed for plagiarizing a speech by Neil Kinnock, the British Labour Party leader, basically appropriating Kinnock’s life story, word for word. But it tells you a lot about how our politics and media have changed that, had Biden done this 10 years earlier, he probably would have gotten away with it. Technology made it impossible for things like that not to have been recorded, exposed and then been all over the 24/7 news.

Your book is a kind of catalog of ironies. Increases in the Hispanic population can be attributed, it turns out, to Republican-sponsored legislation signed by Reagan in 1986.

That’s right. And immigration wasn’t an issue in the 1988 election. It wasn’t until 1992 that it became a hot-button issue, when Pat Buchanan challenged Bush in the primaries and proposed building a fence to stop illegal immigration from Mexico.

Back then, Democrats wanted to secure the border, too, right?

Yes. Former Texas Rep. Barbara Jordan as chair of the U.S. Commission on Immigration Reform in 1994 proposed cracking down on illegal immigration and reducing legal immigration by a third. There’s a lot of attention paid to how the Republican Party has moved to the right since the Reagan-Bush years, but the Democratic Party has changed, too. Bill Clinton and Al Gore campaigned as a new generation of Democrats who supported the death penalty and wanted to “end welfare as we know it.” Bill Clinton wanted abortion to be “rare.”

But there’s no question the Republican Party has changed.

Of course, and you can trace it to the transition of power in the House from Bob Michel to Newt Gingrich. Michel was House minority leader during all those years when Democrats controlled the House, and he was the most effective minority leader in the history of Congress. Any legislation that passed the House under Reagan was thanks to Michel, who was a quiet master of the inside game. But Gingrich came to Congress believing in a much more aggressive style of politics, and eventually rose to speaker. Gingrich epitomized the more combative ideological politics we’re used to today.

Wasn’t there another big change in the way presidential campaigns are financed?

Yes, and that’s huge. From the 1970s through the next 30-odd years, the general elections were financed with public funds, through the negative income tax checkoff. Candidates got matching funds, and both Bush and Dukakis agreed to abide by that, so they were on pretty much an even footing for their campaigns. Like so much since then, the way political campaigns are paid for has changed.

But there’s one political consultant who figured prominently in the 1988 Bush campaign that seems like a link from that day to this — Lee Atwater.

Atwater, who died in 1991 at the age of 40, was Bush’s campaign manager, and he exemplified that aggressive, combative style of political campaigning that we associate today with Trump and the Republicans. He was not averse to personal publicity, and he cultivated this image of having almost demonic powers. He was a cult figure, and if you were a young and ambitious Republican political consultant in the late 1980s, you idolized him. (Of course, it’s not a one-party phenomenon. Jim Carville is the Democrats’ Lee Atwater.)

Atwater was also a partner in the consulting firm of Black, Manafort, Stone and Kelly — with Paul Manafort and Roger Stone, right?

He was, but Atwater was always smart enough to stay on the right side of the law.

Upcoming webinar – Election 2020: Effective Get Out the Vote Strategies