America was founded by pious people seeking religious freedom, right? Not so fast, says John Butman and Simon Targett in New World, Inc.: The Making of America by England’s Merchant Adventurers. In fact, the settlement of the Americas was a commercial enterprise that began in the 16th century. But what the authors call “the forgotten founders” learned early on that the pursuit of profit alone could not ensure the survival of the settlements they established. The facts about our past explain more about our country than the myths do, with relevance for our political and economic lives today. The answers below are those of Butman, who is also the author of Breaking Out: How to Build Influence in a World of Competing Ideas.

So it didn’t start with the Pilgrims?

Not really, and our book does not disparage the Pilgrims and their contribution. The Pilgrims’ story is not wrong, but it is only a small part of the larger story. As far as their coming to what became Massachusetts in pursuit of religious freedom, that’s not really the case. The Puritans already had religious freedom when they moved from England to Holland. What they were seeking when they sailed to America was jobs and the opportunity to better themselves. That of course was in 1620. But English merchants had been trying to establish commercial operations in America for something like 75 years before the Mayflower arrived. That was a kind of start-up period in which conditions were established that made a commercial operation possible.

What was behind that effort?

England in the 16th century was facing an economic, political and social crisis, with woolen exports going down, prices falling, a great deal of social unrest and rising inequality of wealth. Merchants began to seek new markets for wool, first in Cathay — meaning China — which is why they sought a Northwest Passage. When they gave up trying to reach China, they decided, naively, that the Native Americans in the North would be cold and need woolen clothing, which England could supply. Of course, that didn’t work out either.

So what did work?

Eventually, the merchants — who had formed some of the first joint-stock companies in England — figured out that what would become the United States and Canada had natural resources that would be profitable in themselves — fish and furs and then land itself. This led to the unsuccessful settlement at Roanoke, then to the successful ones at Plymouth in Massachusetts and Jamestown in Virginia. All these were money-making operations, including Plymouth, where the Pilgrims ended up. There were private companies — the Plymouth Co. in the north and the London Co. in the south — behind both of these enterprises. Behind them were people with an admirable appetite for taking big risks.

If the story of the Pilgrims and their pursuit of religious freedom is so mistaken, how did it get started? And why?

Actually, this idea — this myth — didn’t take hold until just before the Civil War. This, obviously, was a time of great tension between the North and the South, and there was a concerted effort from anti-slavery people in the North to create a narrative to support their position. People like Daniel Webster and Henry Wadsworth Longfellow championed this idea that the Pilgrims represented the epitome of American values. The Pilgrims, they said, were ethical and moral people who wouldn’t own slaves like those terrible people in Virginia — the ones who also smoked tobacco. The Pilgrims were hardy pioneers. Around this same time, Of Plymouth Colony, the history of the settlement’s early years, written by William Bradford, its first governor, resurfaced after being lost for many years. Bradford’s account of the struggles of the Pilgrims caused a national sensation.

That was part of this effort, too. In 1863, Abraham Lincoln proclaimed Thanksgiving — first celebrated in 1621 — as a national holiday, in part as an effort to bring North and South together in the interests of national unity. The story of the Pilgrims and their quest for religious freedom took hold, and it is still strong. But again, it is only a small part of the larger story, and, to the extent that it leaves out the commercial interests behind the settlement, it doesn’t explain very much.

Now that we have a more realistic understanding of the role the pursuit of profit played in our founding, why does it matter today?

First, it is always important to have a clear sense of how we started as a country. A proper understanding also tells us a lot about who we are as a people, and why commerce is so important to us, individually and collectively. But second, if we look closely at what actually happened in those settlements — Jamestown, especially — we also learn how we understand commerce itself.

A couple of other developments shaped these events, and we’d be remiss not to mention them. There was the publication in 1516 of Thomas More’s Utopia, which had a profound influence. More was imagining an ideal society, somewhere across the Atlantic Ocean, where you could start from scratch, as it were. And people eventually began to associate that idea with the Americas, a place that could offer just such an opportunity. Then the idea of the “commonwealth” was taking hold in England, the idea that a society should be constructed with a concern for the common good, with social structures that benefited everyone. And you see this played out in Plymouth, for example, where private land ownership was allowed. But you see it even more in Jamestown. 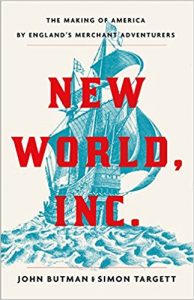 John Smith and the other founders of Jamestown realized pretty early that you couldn’t run a successful money-making operation there with “wage slaves” alone. You couldn’t sustain such an enterprise just paying men to be there and do the work. The men needed stability and structure. They had to have families, for example. So, they began to import women as well as men. And you needed social structures, so they established a representational government. People had to have a stake in the enterprise. There needed to be some broader and deeper purpose behind the lives they led and the work they did.

What’s important is that those tensions continue to exist even now, and the truth that was discovered at Jamestown and Plymouth is that commercial enterprises inform the way we think about business today. We are always working to strike that balance, and I believe that the next phase of America’s development — what emerges from what we are going through now — will also be informed by this understanding. There will be trial and error, as there was in the beginning of this country, and there will have to be a strong sense of social purpose for us to move forward successfully.