Duke Energy’s Susan Francis is Volunteer of the Year 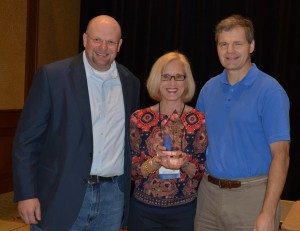 Susan L. Francis, Duke Energy’s PAC and grassroots manager and the Council’s 2015 Volunteer of the Year, has vivid memories of her first National PAC Conference.

“Even though Duke Energy is a big company, I was running basically a one-person shop,” Susan says. “PAC managers can feel isolated, like they are on an island within the larger organization. But at the National PAC Conference, I discovered other people who knew what I did and I could really talk to about what I did and how I could do it better. It was a relief and a revelation.”

That was almost 10 years ago, and Susan has been an active volunteer in Council activities ever since. In the past three years alone, she has attended 18 educational events and participated in several as a speaker or moderator.

She has also been involved in the Council’s mentoring program. Her first mentor was Jeff Ashe, now senior vice president for PAC and grassroots development at Aristotle International.

“Jeff was great,” Susan says. “Jeff had worked at Duke Energy himself until 2003, so he knows about our company and has been very helpful to me. I would just like to be nearly as helpful as a mentor to others. No matter where we are in our professional lives, we always need a mentor to encourage us and even — when we need it — to correct us!”

A graduate of the University of North Carolina at Chapel Hill, Susan worked in newspaper advertising and marketing and public relations before joining Duke Energy’s state government affairs office — first as a contractor, then an employee. She has worked in federal government affairs for Duke Energy since 2006. She received her Council Certificate in PAC and Grassroots Management in February 2015.

She has been an active participant in the Council’s Political Involvement Network and the PAC Conference Advisory Committee, and has participated in multiple benchmarking projects.

“Susan has been a wonderful resource for Council staff when they have sought her advice,” says Council President Doug Pinkham. “But she also actively encourages the staff to refer PAC managers to her for advice, so she has been a great help to both Council staff and members.”

Says Susan, “My degree is in journalism, and the most important thing I learned when I was studying reporting is that I might not know the answer, but I know or can find someone who does know the answer. The network of contacts I have made through the Council are the people I know who know the answers. They are my experts.”

The Council has honored a Volunteer of the Year annually since 2008. The award recognizes recipients’ contributions not just to the Council but also to the larger public affairs profession.

For more information about the Volunteer of the Year award, visit pac.org/volunteer.