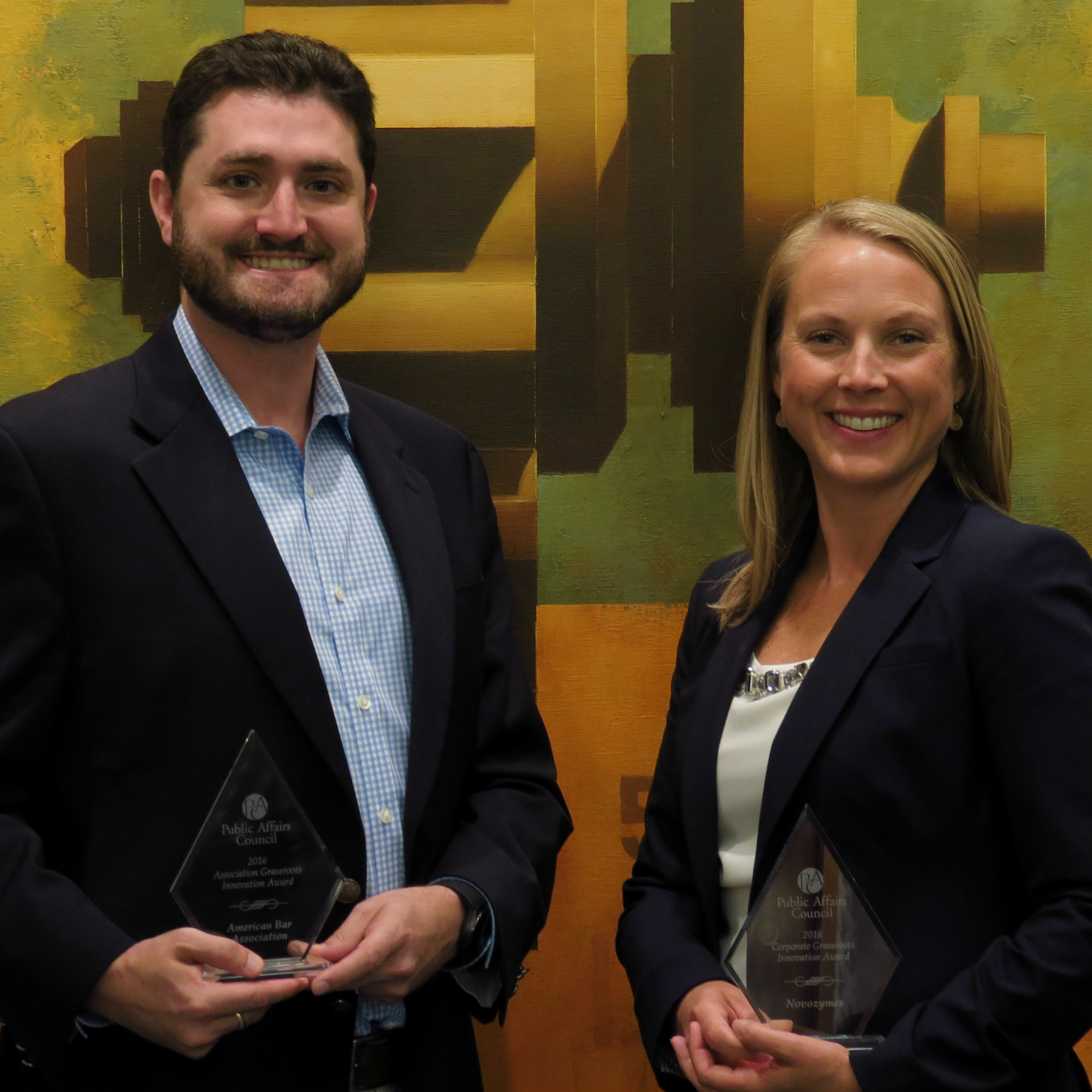 Novozymes and the American Bar Association received the Council’s 2016 Grassroots Innovation Awards for their creative and effective approaches to engaging, empowering and activating their grassroots advocates.

“Both Novozymes and the American Bar Association inspired the Grassroots Innovation Awards judges because neither is letting typical barriers get in their way to educate, motivate and engage their key audiences,” says Rikki Amos, the Council’s director, U.S. public affairs practice. “What’s more, they are thinking long-term about who will be the most valuable advocates in years — not just with the current call-to-action campaign.

“By leveraging creativity more so than big budgets, they’re each building an educated advocacy base across the breadth of their membership, from Millennials to experienced professionals. All advocacy programs can learn something from these two innovators.”

Corporate Innovation: Novozymes
The public affairs team for the biotechnology company Novozymes wanted to punch above its weight as far as public policy impact was concerned.

“We are constantly challenging ourselves to practice public affairs more effectively and to look for cutting-edge ways to engage,” said Dave McGlinchey, Novozymes’ senior communications officer.

So Novozymes developed its Ambassador Network, a diverse network of employees that engage in public and government relations activities to support business objectives, and deployed its inaugural class of Ambassadors in June 2015. A key part of the Ambassador Network is a dynamic digital hub that gamifies grassroots engagement by employees (affectionately known as “Zymers”).

The North American Public Affairs and Communications team developed the program to achieve three main objectives: to build strong relationships with elected officials and media; to activate the employee base on social media; and to increase employee engagement, enthusiasm, knowledge and passion.

“For employees to participate, it’s got to be easy and fun,” said communications manager Paige Donnelly. “They all have a day job that demands the majority of their time, but to be an Ambassador, they must also be passionate and motivated to tell our company story.”

A digital leaderboard allows employees to check their point totals and standings in relation to their peers. “The competition got pretty heated,” said Amy Davis, manager, government relations. “We had employees asking what they could do to earn more points and we gladly obliged by providing opportunities to submit comments to the EPA or host tours for local members of Congress.”

Ambassadors earn points a variety of ways: by sharing Novozymes and industry content through social networks; for subsequent interaction with their posts (e.g., clicks, comments, likes etc.); by visiting congressional offices; by hosting VIP or media tours at company facilities; or by staffing the company booth at Public Affairs-directed community events.

Early feedback from Ambassadors has been positive. Some remarked how much more they’ve learned about the company beyond their function since the program began. Others have indicated it has given them a safe way to share the company story without worrying about saying the wrong thing.

These types of activities directly support two of the company’s new strategic goals: to educate one million people about the potential of biology and to enable Zymers to develop.

But Novozymes’ innovation went beyond the finite realm of grassroots. Through such engagement, the Ambassador Network team hopes to change company paradigms.

“We’ve always had a very enthusiastic network of colleagues to draw upon that live in the communities represented by these lawmakers. The program can help put their personal stories and passions to work to build relationships and educate policymakers and influencers about our company and its people. It’s a powerful way for employees to impact advocacy,” said Chris Bender, head of public affairs and communications.

By empowering Zymers to engage with both familiar and unfamiliar networks of people (from colleagues to Congress), the program establishes trust.

“Externally, employees of all stripes are doing the outreach. Internally, these employees come to see the value of the public affairs function, drawing us closer to the commercial side of the business and allowing us to plan future strategy in a more integrated way,” concludes Bender.

Association Innovation: American Bar Association
A steady stream of law school graduates into the legal workforce is critical to the American Bar Association’s success as an organization, so when the Public Service Loan Forgiveness (PSLF) program — which enables many young ABA members to rid themselves of student loan debt through employment in lower-paying public service positions — was threatened, the ABA team knew it needed to respond.

The association’s “Save #Loan4giveness” campaign stood apart from its previous grassroots efforts: it targeted its youngest and prospective members exclusively through social media and branding geared toward these constituencies. It also encouraged law students and young lawyers to share personal stories with their senators via social media, enabling the campaign to be created and operated on a very limited budget (under $1,000).

The ABA also developed a creative way to use low-cost, but cutting-edge technology to drive its message home on Capitol Hill. After members shared their personal stories on video urging lawmakers to save the PSLF, ABA government relations staffers knew that it would still take something innovative to make sure those videos were noticed by legislators and Hill staffers. To help its message stand out, the ABA will be arming its members with Google Cardboard headsets — low-cost (less than $10) virtual reality devices really made of cardboard — branded with the Save #Loan4giveness” logo for their upcoming Hill visits. They will use the headsets to share virtual reality versions of previously recorded videos generated by the campaign with Hill staff and legislators, allowing constituents to connect directly with their congressional offices.

To date, the campaign’s primary goal of saving the loan forgiveness program from being capped or eliminated has been achieved: there have been no additional congressional efforts to interfere with the program. Nevertheless, the association stands ready to reactivate its grassroots should other threats arise.

“These innovations are important because they demonstrate ways in which associations, regardless of size and budget, can generate effective grassroots communications from young members,” says Jared Hess, the ABA’s director of grassroots operations.

Hess offers up another — and nearly as important — aim of Save #Loan4giveness: “The secondary goal of the Save #Loan4giveness campaign was to identify young lawyers and law students who would be affected by potential changes to the PSLF program and facilitate the sharing of their stories with their senators.”

This, in turn, may have a cascade effect for future grassroots efforts.

“Thousands of law students around the country saw what the ABA was doing to protect a program that is so vitally important to their lives and careers,” says Hess. “And by engaging law students at the very beginning stages of their legal careers the Save #Loan4giveness campaign sets the stage for future advocacy as more young people enter the legal field.

“From the beginning of this campaign, we set out to do something completely new and innovative. By that measure alone, the campaign was a success, but the true success lies in the extraordinary stories told by thousands of constituents who care about this issue.”

About the Awards
The Grassroots Innovation Awards are presented annually at the Council’s National Grassroots Conference, and winners are invited to present their innovations during one of the conference’s keynote sessions.

The 2015 award winners were Novo Nordisk, the American Heart Association and the Professional Beauty Association.

To learn more about the Grassroots Innovation Awards, visit pac.org/gia.