Though they’ve taken a hard hit from the Great Recession, Millennials are more satisfied with the way things are going in this country today and more supportive of government than older Americans are. They’re also largely positive toward business, though they’re less likely to trust major companies.

“It’s easy to assume that young people are more likely to be cynical about the private sector and the role of big business in our society,” says Public Affairs Council President Doug Pinkham. “In reality, the new Pulse survey shows that 62 percent of the Millennial generation — people ages 18 to 32 — actually have a favorable opinion of major companies. Why? Well, they really like the products and services sold by big firms.”

“However, they don’t feel nearly as trusting of big companies as people in older generations,” he says. 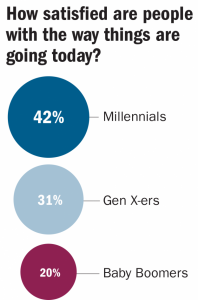 Millennials (ages 18-32) are split on how satisfied they are with the way things are going, with 42 percent satisfied and 51 percent unsatisfied, according to the 2013 Public Affairs Pulse survey. But those divided views are far less negative than those of Gen X-ers, of whom only 31 percent are satisfied. And Millennials are almost giddy compared with Baby Boomers; only 20 percent of that generation feels satisfied with the way things are going today.

Though young people’s views of businesses big and small are pretty much in line with those of older Americans, Millennials are somewhat less likely to trust major companies. Forty-eight percent of Millennials trust big business, compared with 58 percent of Gen X-ers.

As for Washington, 51 percent of Millennials give the federal government favorable scores, compared with only 44 percent of Gen X-ers, 35 percent of Baby Boomers and 34 percent of Matures (ages 68 and up).

Regarding the private sector, Millennials are the most enthusiastic generation in saying major companies are doing a good job providing useful products and services, with nearly four in five of the group (79%) giving firms plaudits in this area.

For a generation facing a dramatically difficult job market, Millennials are also surprisingly more positive about companies’ role in creating jobs. Forty-four percent believe companies are turning in a strong performance on employment, while 53 percent disagree. Only 35 percent of Baby Boomers agree that companies are providing strong support for employment.

Yet Millennials do not applaud corporate performance when it comes to compensation. By 34 percent to 63 percent, this generation says big companies are not paying their employees fairly. That contrasts with the 48 percent to 41 percent positive split voiced by Matures.

In two other areas close to this generation’s values, major companies are not doing well. Almost two-thirds of Millennials (65%) say companies are doing a poor job on the environment. That is the most negative view from any generation. In addition, Millennials give a thumbs-down to corporate performance in supporting charities in their communities. Sixty-one percent say companies are not doing a good job, compared with only 41 percent of Matures who hold this view.

Consumer Feedback by Generation (and Overall)

Millennials are more likely than other generations to give feedback online (both positive and negative).

Overall, Americans tend to share more positive than negative views about a company online. Over the past five years, roughly one-third of consumers have posted positive reviews about a company on the Internet (36%) or have become a “fan” of a company through social media (30%). But only about one-quarter (24%) say they have posted negative reviews online. Complaints are generally made directly to a company, through letters, telephone calls or emails. Yet most consumers prefer to discuss both positive and negative experiences with family and friends.