Survey: People of Color Represent only 17% of Public Affairs Profession 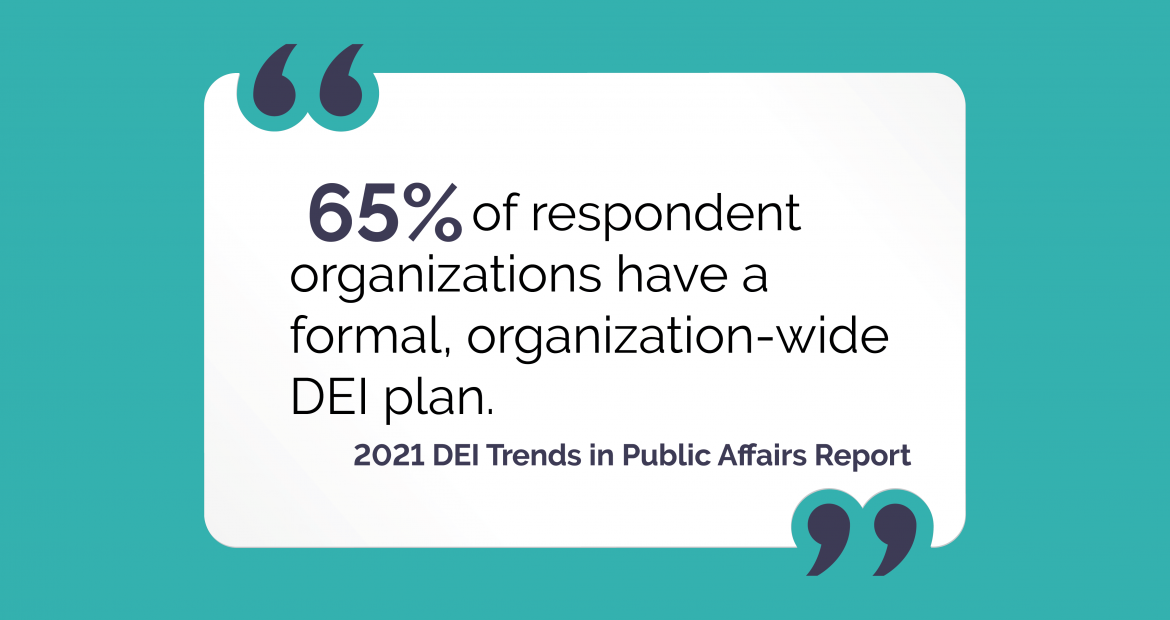 Survey: People of Color Represent only 17% of Public Affairs Profession

Washington, D.C. – A new survey by the Public Affairs Council on diversity, equity and inclusion (DEI) finds the average share of public affairs staff who are people of color is just 17%, significantly lower than the actual racial diversity of the U.S. (approximately 40%, according to the U.S. Census).

The survey of 127 public affairs executives, conducted between Feb. 9 and March 5, 2021, also examines DEI policies and practices in strategy and governance; hiring, staffing and training; working with external groups; and advancement and programming.

The survey is among the first deliverables of the Public Affairs Council’s DEI initiative, which was recently launched to grow diversity in the profession and in senior-level positions, engage a more diverse base of experts in education programs, and eliminate racial inequities in public affairs.

Diversity was measured in two ways: actual diversity (the percentage of function staff who are people of color) and perceived relative diversity (how the respondent perceives the diversity of his/her function compared with the profession as a whole). The findings show that these two measurements are aligned. Respondents who view their public affairs function as lacking representation do in fact have low diversity, and there were similar correlations for those who perceive their functions as having average or high diversity.

“Respondents are viewing their team’s diversity as it actually is, rather than as they think it should or could be,” says Public Affairs Council President Doug Pinkham. “This honest assessment will help us set a path to progress as we work to fulfill the objectives of our DEI initiative.”

Other key findings from the survey include:

Lack of diversity seen as a barrier to entry

Most organizations incorporate DEI into their strategic plans and staffing

“This survey gives us an important baseline from which to develop programs and initiatives to advance the profession and address diversity and social progress priorities,” says Roi Ewell, principal of Ewell & Associates and chair of the Council’s DEI Steering Committee.

This project was conducted through the Council’s research affiliate, the Foundation for Public Affairs.