Ellie Shaw Is Council Volunteer of the Year 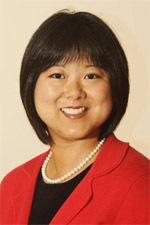 Ellie A. Shaw, director of federal government affairs for the American Express Company’s political education and involvement programs, has been selected as the Council’s 2008 Volunteer of the Year, the first member to receive this new award.

“Ellie has been active in supporting the Council and its program for many years — in two different jobs,” says Doug Pinkham, Council president, when he announced the selection in October. “She has attended many of our conferences, but her level of involvement has gone way beyond that. She mentors other members, speaks at seminars, suggests ideas for new programs and services, and helps us recruit new companies and associations.

“We used to joke that if we ever had a member-of-the-year award, Ellie would be the first winner. Well, guess what? We now do, and she won!”

Before joining American Express in 2006, Ellie served as manager of public affairs for Exelon Corporation, overseeing the Chicago-based utility company’s PAC and grassroots activities. Prior to that, she worked in government affairs with the Nuclear Energy Institute in Washington, D.C.

In addition to her involvement with the Council, she served on the Business Industry Political Action Committee’s PAC Council managing committee, the Public Leadership Education Network’s board of directors, and the Women in Government Relations’ PAC, politics and grassroots task force.

“Being chosen as the Council’s Volunteer of the Year was a total surprise,” Ellie says. “I wasn’t even aware I was under consideration.”

Good news travels fast, apparently. “When my boss, Bobby Thomson, vice president of federal government relations at American Express, heard I’d been selected,” Ellie says, “he sent a note to our entire staff, offering his congratulations. That was especially gratifying.”

Any association’s strength depends on the involvement of its members. “With that in mind, this past year we decided to create an award that recognizes the most active, most dedicated people in the membership,” Pinkham says. “We analyzed our database to see who had spoken at seminars, provided advice to other members, served on advisory boards and provided best-practice information to the Council’s library.”

Because the Council has so many dedicated members, selecting the most outstanding was a challenge. “But we eventually created a list of finalists, and the Council’s executive committee then voted on the winner,” Pinkham says. “We plan to do this every year to draw special attention to folks who make the Council successful.”