A Nation of Know-It-Alls?

A Nation of Know-It-Alls?

We’ve become a nation of know-it-alls, Tom Nichols claims in The Death of Expertise: The Campaign Against Established Knowledge and Why It Matters.

And we’ve reached this sorry state when ignorance is running rampant. Ironically, this is happening at a time when we have more information at our fingertips than at any time in human history. What’s going on, and why should we care? A professor at the U.S. Naval War College and former Senate aide, Nichols says our hostility to genuine expertise imperils our democracy.

Can you tell the story about Jimmy Kimmel that’s in your book?

Kimmel went into the street during last fall’s presidential campaign and asked people their opinions of the candidates’ tax plans. But he switched them. For Trump supporters, he described Hillary Clinton’s tax plan, and for Clinton supporters he described Trump’s plan, and the people consistently said they supported the plans — even though they were endorsing the other candidates’ policies.

But is it reasonable to expect people to be experts on tax policy? People support a candidate because they tend to agree with their overall approach to policy.

Of course. That’s not the point. What that story illustrates — and more academic studies support this — is how sure of themselves people are, even when they really have no idea what they’re talking about. The problem is people think they are experts when they’re not.

Maybe this is because they can Google stuff so easily.

We are awash in information but woefully deficient in knowledge. We are too easily impressed with random facts. Whenever I give a talk, and the person introduces me, they read off my education and all that stuff, and then they say I’m an undefeated “Jeopardy!” champion — which is true — and people burst into applause. But being a “Jeopardy!” champion is no great achievement. 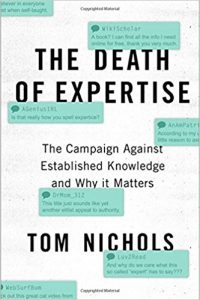 A lot of us would disagree.

Well, it isn’t a great achievement. My wife says my mind is a kind of lint collector. I can remember a lot of random facts. And our entire culture is becoming more like that, with endless amounts of information that have no context. We’re becoming a world of Cliff Clavins, the know-it-all postman on Cheers.

You also argue that our increased use of metrics is a problem.

We are overly impressed with quantification. I think all this quantification actually makes us stupider. We tend to forget something about measurement. We measure what we find, not what is important. We are a large and diverse country, so I understand the importance of public opinion polling. I think we are better off with people like Nate Silver and what they can do than we would be without them. At the same time, our pundits are forever talking about how “the people” support this or that policy because people have responded to some survey.

We need to be very skeptical of the idea that true expertise is not needed for making sound public policy.

What’s wrong with that?

What’s wrong is that the pundits forget that most of these people being surveyed had no idea what they were talking about. They have no genuine understanding of the policy they’re being asked about, but they offer their opinion anyway. I mean, who really wants to tell a pollster they really don’t understand something well enough to have an opinion?

You also say this widespread assumption that we do have this knowledge coincides with a suspicion of true expertise.

That’s part of the problem. There was a time when people didn’t expect to be experts in everything. We applied a kind of division-of-labor understanding of knowledge. Some people understand some subjects and others understand other subjects, and that’s fine. That’s how it should be. But now everybody seems to think they are as “smart” as the next person, whether they are or not.

This is inevitable in a democracy, isn’t it? And desirable?

Yes, in many ways that is true. But there are limits. Our democratic impulses — especially when demagogues exploit them — can lead to a resentment of people with more formal education, for example, or with real expertise born of years of work in a subject.

In the post-Vietnam world, we grew to be suspicious of what David Halberstam called “The Best and the Brightest.” The best-educated, smartest people made terrible decisions, and we grew to be skeptical about putting too much confidence in what these “elites” said and did.

That’s true, but a proper understanding of that episode in our history makes my point. Robert McNamara, the secretary of defense during the escalation of the Vietnam War, was not an expert in military matters or foreign affairs. He was a Ford Motor Co. “Whiz Kid.” He was a “smart” guy. He had made a lot of money running a car company, so how complicated could running the Defense Department be? Well, it turns out it was really complicated, and they made a mess of it.

What relevance does this have for our own time?

We need to be very skeptical of the idea that true expertise is not needed for making sound public policy. We need to question the notion that all you need is to be generically “smart.” We’re seeing that play out right now. Donald Trump is a “smart guy.” Just ask him. He knows everything. He’s terrified of saying he doesn’t know something or that he will be briefed on it. A great example was when he said he’d read the whole Iran deal like it was a booklet that led to a couple of signatures at the end. You can’t “read” the Iran deal because it is a series of agreements. But like most Americans, he is deeply insecure about what he doesn’t know, so he pretends otherwise.

Do you have a theory for why this is occurring in our culture?

I do, though I don’t go into it much in the book. We’re seeing the fruit of 40 years of “postmodernism,” where there really is no settled objective reality. We’re also seeing the result of the “customer satisfaction” model of higher education, and of generations of young people being told they were all “smart” and “gifted.” This has turned us into a nation of narcissists.

And this has happened at the same time more and more people, as you write, claim to feel “disempowered.”

They do, and whose fault is that? People need to stop pretending to be experts and actually educate themselves. People complain that experts actually run things, but there’s a reason for that. To the extent that they do run things, they do so by default. That’s because understanding public policy — whether domestic or foreign — requires a tremendous amount of knowledge, acquired over many years of study and practice. It’s not enough to be “smart.” You actually have to know things.

What You Don’t Know May Surprise You