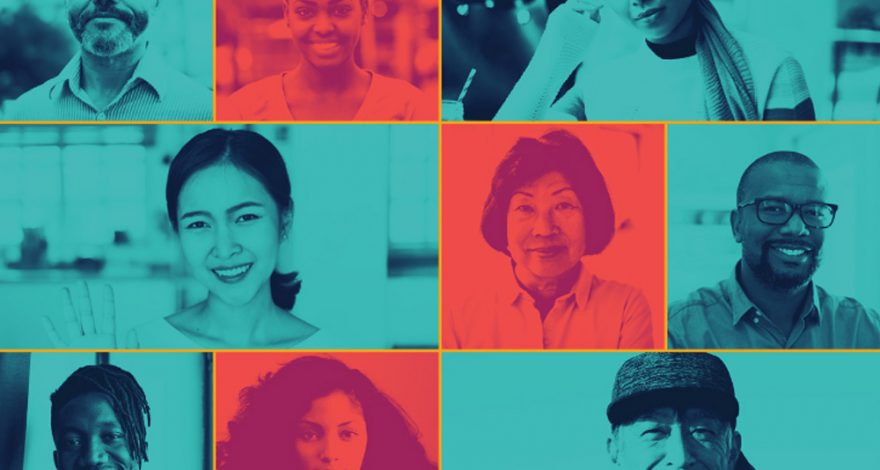 The public affairs profession is not very diverse, and it knows it.

The Public Affairs Council just released the results of its new Diversity, Equity and Inclusion (DEI) survey, and a key finding showed that the share of public affairs function staff who are people of color is just 17%, a low number when compared with the average racial diversity of the United States (approximately 40%, according to the U.S. Census).

While it’s clear from the results that the public affairs profession lacks diversity, respondents do recognize the extent of this challenge.

The survey measured diversity in two ways: actual diversity (the percentage of function staff who are people of color) and perceived relative diversity (how the respondent perceives the diversity of his/her function compared with the profession as a whole).

“Respondents are viewing their team’s diversity as it actually is, rather than as they think it should or could be,” said Public Affairs Council President Doug Pinkham. “This honest assessment will help us set a path to progress as we work to fulfill the objectives of our DEI initiative.”

The survey is among the first projects of the initiative, which was recently launched by the Council, and includes objectives of increasing the pipeline of people of color into the profession and into senior-level positions, engaging a more diverse base of industry experts, and reducing racial inequities in the public affairs profession.

Lack of diversity is seen as a barrier to entry

How the diversity of the public affairs profession is perceived by those outside it is considered by the respondents to be a potential barrier to entry. Sixty-one percent (61%) say the perceived diversity of the field discourages individuals from entering the field.

Despite concerns over the low diversity of the profession, 83% of respondents think diversity and inclusion in the profession will increase in the next three to five years; 69% say it will increase “somewhat,” and 14% say “much more.” The primary driving factor for this movement is organizations making conscious decisions to hire more diverse candidates, according to three-quarters of the respondents.

Most organizations incorporate DEI into their strategic plans and staffing

Despite these low-diversity averages and perceptions, the infrastructure is in place in many instances to make progress. 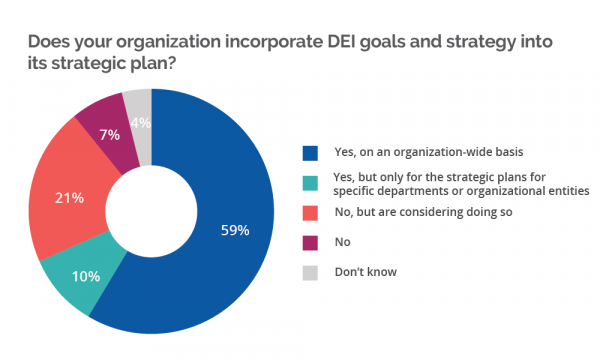 Although associations are generally not as far along at advancing DEI planning as corporations, in many cases they are the preferred groups to partner with on DEI efforts. 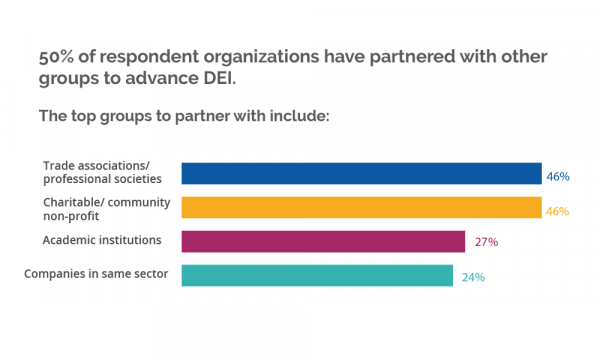 How does the profession improve representation of people of color in senior-level positions?

Nearly two-thirds of respondent organizations have a DEI plan, yet only one-third (35%) have a process in place to support the advancement of people of color to senior-level positions. Twenty percent (20%) have a formal process and 15% have an informal process. What’s more, when respondents were asked the top reasons they think the profession will become more diverse in the next three to five years, only 19% chose “organizations are promoting more diverse internal candidates to senior-level positions” as one of the reasons.

“This survey gives us an important baseline from which to develop programs and initiatives to advance the profession and address diversity and social progress priorities,” says Roi Ewell, principal of Ewell & Associates, chair of the Council’s DEI Steering Committee and a lead architect of the Council’s DEI strategy.

The survey shows that the benefits of DEI initiatives can be substantial, both organization-wide and within the public affairs function.

Only 9% of respondents report that no organization-wide benefits have been realized as a result of DEI initiatives, programs and efforts. Of those who were able to identify specific benefits, the top benefits include improved cultural understanding (79%), improved employee morale (76%), better overall reputation of the organization (48%) and improved external relations (44%).

The respondents were less likely to report benefits from DEI initiatives specific to their public affairs function, with 19% indicating that no benefits specific to the function have been realized. Among those who did identify specific benefits, the top benefits were greater cultural sensitivity when advocating on difficult issues (77%), stronger relationships with stakeholders/potential allies (63%), improved employee morale (51%), better relationships with elected officials (40%) and stronger employee support for the organization’s political engagement (40%).

The Public Affairs Council’s Diversity, Equity and Inclusion (DEI) survey was sent to 1,100 public affairs executives between Feb. 9 and March 5, 2021, to examine DEI policies and practices in strategy and governance; hiring, staffing and training; working with external groups; and advancement and programming. The resulting sample consisted of 127 individuals.