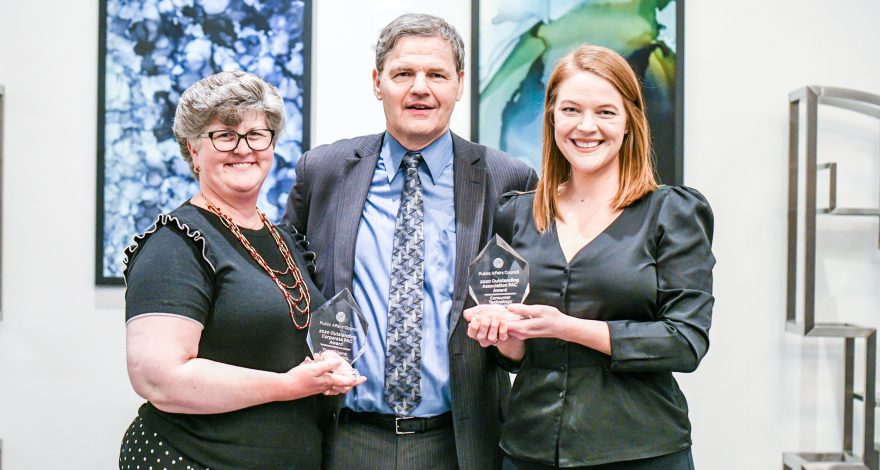 When Kelsey Odom joined the staff of the Consumer Technology Association in the summer of 2018, she had never worked for a PAC, much less a trade association PAC. Her experience with fundraising had been limited to handling campaign contributions for congressional candidates.

Now CTA’s director of PAC and political affairs, Odom found herself faced with reams of paper forms that were part of the prior approval process, most of which had been filled out by hand in illegible handwriting.

“I was flabbergasted at what I was up against,” she recalls. “I thought, ‘Are we really doing this with paper forms, filled out manually, with pens and pencils?’”

CTAPAC’s method of streamlining the process earned it the 2020 Outstanding PAC award in the Association category. The winner in the Corporate category is WILLCO PAC, the Williams Cos. political arm. The finalists and winners were recognized at the Council’s National PAC Conference in early March in Miami.

Associations whose memberships consist of companies, as opposed to individuals, face the unique Federal Election Commission requirement of having to receive prior approval from a member company in order to solicit its employees for the PAC. This is often an extremely cumbersome process that impedes a PAC’s ability to quickly expand or increase receipts. A doctor, for example, can join an association that represents physicians as an individual. But CTA, as an association, represents corporate members, not individuals, and must obtain prior approval to solicit employees of their member companies.

“In our case, that means asking hundreds of companies for their prior approval,” Odom explains. “Understand, too, that the approval we obtain can be good for multiple years, meaning these companies’ approval forms can expire at different times. So we’re juggling various factors that impact prior approval — and that’s before we’re able to actually solicit contributions. Let’s just say the process was not sustainable. It was frustrating to everybody involved, not least to the member companies themselves.”

Eager to remedy the situation, Odom and her team began to ask vendors about possible solutions but couldn’t find an off-the-shelf way to make the whole process digital. Eventually they took the system online with the help of DDC Public Affairs. It took about a year to get the new system developed, in place and functioning, “but it was more than worth it,” Odom says.

The initiative is unique in the PAC world in that it significantly streamlines the prior approval process. Beyond transitioning from manual, paper-based tasks, the web solution simplifies multiple steps. It offers member company leadership an online form in place of paper forms and notifies CTAPAC by email in real time when prior approval is given. The website’s drop-down menu allows individuals to search for their company and then, through integration with CTAPAC’s database, the solution automatically links the individual’s profile to that company, making it easier and more efficient to sign up and give.

Most PACs tend to measure their success by the amount of dollars they raise. This of course is the point. But the prior approval process has a significant impact on the totals themselves. And getting that right as soon as possible, Odom says, means greater potential down the road. Streamlining this process has improved the accuracy of the data collected and ultimately enables Odom to focus on fundraising strategies and communications that have a larger impact on PAC growth.

“This transition process was a heavy lift, and I’m so appreciative that CTA’s leadership was open to trying something new,” she says. “Managing the prior approval process is the thankless part of the job — it takes a ton of time and energy to deal with the paperwork alone.

“When you’re dealing with that, it takes time away from focusing on the rest of my PAC responsibilities. But our leadership also realized that making this transition to digital forms will mean better results for years to come.”

At the end of 2017, WILLCO PAC, the political arm of energy infrastructure company Williams Cos., set a three-year goal of becoming a $1 million PAC by 2020. “We achieved the goal,” says June Pennell, its PAC manager, “not in three years, but two.”

The PAC’s growth metrics are remarkable. Since Pennell went to work for the Tulsa, Oklahoma-based company in 2000, PAC membership has grown from 107 to 1,079. Election cycle receipts have risen from $110,000 to a projected $1.2 million-plus — all during a time in which the company “came close to bankruptcy, shed one of its business units, was almost taken over by another company and went through a series of layoffs,” Pennell says.

After each of these events, the PAC has fought back and grown. This expansion has taken time, patience and persistence. Its success over the long term is the result of the tried-and-true method of using peer-to-peer solicitations.

With a goal in 2019 to recruit 230 new members and raise $150,000 more in recurring payroll deductions, the company assembled 122 employees — identified with the help of more than 40 members of senior management — to serve as PAC leaders.

Each of these leaders attended training about the PAC and were then assigned to about 25 employees. Pennell herself, as PAC manager, was responsible for soliciting the 122 PAC leaders and nearly 90 directors. Over the next six weeks, the leaders met with the employees in their respective groups.

“A companywide, peer-to-peer campaign takes a lot of tracking,” Pennell says. “But the results speak for themselves.”

PAC leaders didn’t have to take the hard-sell approach. “We have three C’s that guide the PAC and its activities,” Pennell says. “The first is ‘company,’ which might seem kind of obvious. The PAC serves the company’s interests.”

But the second and third C’s aren’t so readily apparent. The second C is for “causes.” The company supports causes that are important to PAC members, so if an employee contributes $200 to the PAC, the company will match that contribution with one to a charity chosen by the employee. For employees who give at a “recommended” level, which is aligned with the management level, the company matches every $1 with a $1.50 donation.

The third C is for “career.” Through the PAC’s educational activities, the company offers employees opportunities to attend PAC events with members of senior leadership.

WILLCO PAC approaches its mission with serious purpose, and a great deal of thought has gone into the program. “This is a big undertaking, and I’m fortunate to have a great group of volunteers who take time away from their desks to make this happen and help us meet our goals,” Pennell says. “To succeed at something this ambitious, you have to be open to other people’s ideas.”

For hearing new ideas, Pennell recommends attending the Council’s National PAC Conference. “Be open but be picky about the ideas you try,” she says. “Select two or three of the dozens of new ideas you will hear at the conference and try to implement them, and keep refining those ideas as you go forward. It’s worked for us.”

“Every year, managers and boards move their PACs forward into new and innovative territory,” says Kristin Brackemyre, the Council’s director of PAC and government relations. “It is always rewarding to see the strides they make and to understand how they achieve these impressive results. CTAPAC and WILLCO PAC have tackled the challenges they’ve encountered in ways that set an example worth following to others.”

About the Outstanding PAC Awards

The awards are presented annually during a gala ceremony at the National PAC Conference. Winners are invited to present their campaigns during a special conference session. Could your organization be a future winner? Learn more.

Contact Laura Horsley, senior director of marketing and communications (does this need replaced?)