Are Your Conversations ‘Stuck’?

Are Your Conversations ‘Stuck’?

In Breaking Through Gridlock: The Power of Conversation in a Polarized World, Jason Jay and Gabriel Grant explore why Americans seem to be talking at crossed purposes these days and how they can begin to discuss their differences in more productive ways. If we don’t, they suggest, the shouting will only get worse. Jay is on the MIT Sloan School of Management faculty. Grant is the CEO of Human Partners and cofounder of Yale’s Byron Fellowship Educational Foundation.

Are Americans really as “polarized” as Fox and MSNBC and as arguments about events in Charlottesville, Va., would suggest?

Probably not, but the problem is real, and why we wrote the book as we did is in part a response to this polarization. What we find, increasingly, is that the ratio between information and opinion on the political shows has shifted. There’s more and more opinion and less and less information, and this is true not just of the cable shows but of the New York Times and the Washington Post.

How do you account for that imbalance of fact and opinion?

One thing driving this shift is that people share their opinions on social media in a way they don’t share information or reporting, and that’s important to the news organizations as businesses. They want that response — that sharing and reposting and all of that. But this also creates a feedback loop, a parroting of what people hear on TV, and a kind of hardening of our attitudes, especially when we live increasingly in these political bubbles.

You say that the intensity of this polarization led you to change the way you wrote the book.

It did. We’re both political liberals, Gabriel and me. And our original idea was to write the book for an audience of people like us — advocates for environmental and social change. But we realized in the highly polarized 2016 presidential campaign that all of us, in one way or another, are advocates for our beliefs. That’s true even if we are accustomed to thinking of advocates as people who go on TV and argue for our positions, who are always shaking their fist at the other person and being a jerk. But that’s too limiting. And at a time when so many of us are advocating for one thing or another, we need to learn to do that effectively, whatever our cause. We need to be able to talk about our differences and have conversations that actually lead somewhere. Too many of them just break down.

“What we should try to do is make space for mutual understanding, and we sometimes have to make this effort, with no guarantee that the other party is going to reciprocate.”

This is what you call “stuck conversations.”

That’s right — conversations that break down and prevent people from understanding one another and making any kind of progress. In order to avoid conflict, we stop talking altogether. What we want is to develop some courage and take risks that will enable the conversations to become “unstuck.”

How do we do this?

First, we need to develop a clear sense of what we want from a conversation, and we mean conversation in a larger sense here. Not just talking to one person once, but larger social conversations that can lead to understanding and actual movement and change that we can all benefit from. Second, we need to assess our own contributions to this breakdown in communication, acknowledging our own biases and prejudices and self-righteousness and certitude — and our own desire to be right, to “win” an argument.

You call this “owning the polarization.”

Yes, we need to recognize and admit to ourselves what we do that makes the problem worse. We need to realize that repeating “talking points,” for example, doesn’t persuade the other person or group that we’re right and they’re wrong. What we should try to do is make space for mutual understanding, and we sometimes have to make this effort, with no guarantee that the other party is going to reciprocate. But there is a good chance they will.

As humans, we are wired to imitate what others do. So, in one of these conversations with someone with very different views, if we can admit our own prejudices or just our own uncertainty or ambivalence, the other party very often will make similar gestures, and when they do, that allows the conversation to move forward. We understand each other better. Now we can actually make some progress and work toward a common understanding. But taking that first step isn’t easy. Adopting this new way of approaching our differences is difficult. 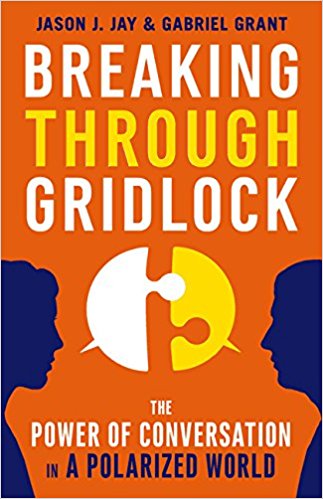 Because it requires us to give up the games we tend to play when we are discussing politics. As I said, we want to “win” and in a sense, to dominate the person who disagrees with us. And we have to be willing to give up that power game. Unless we do, we will remain stuck, and we won’t be able to learn from each other, which is necessary if we are to make any headway, as individuals and as a society — even as family members.

I can give you a very real example from my own life. Politically, as I said, I’m a liberal. I have a cousin who is a Trump supporter. I called him the other day just to talk about some of this. And to do that, I realized I needed to establish a “context of relatedness,” which is a very academic phrase and one I don’t much like, by the way. Here’s what I mean. I didn’t call him and start talking about politics. We talked about our grandmother who died recently. We are both young dads, so we talked about being dads and about our children. We established this connection that had nothing to do with politics and our differences. We were sharing our stories.

Why is that important?

Sharing stories is a way to get to our differences in a safe way. Instead of stating our opinions, we’re talking about our experiences — and what led us to view things as we do. We will still disagree, but now we have established some ground for understanding. It’s useful to remember that the term “polarization” is a metaphor from electricity.

The way the word is commonly used, polarization suggests heat — things being too charged up and too hot to handle safely. If you touch it, you will be zapped, right? What we want to do is depolarize a situation to the point that we can touch and get close to it, safely. We don’t mean everybody is supposed to agree, and that’s the end of it. Some level of voltage is necessary. We need different points of view and different values, emerging from different experiences, to be defended. One person might be arguing for “fairness,” while the other is arguing for “justice.” We need these different points of view to help us arrive at solutions that everyone can live with. Difference is good.