Thought Leadership is Just the Beginning 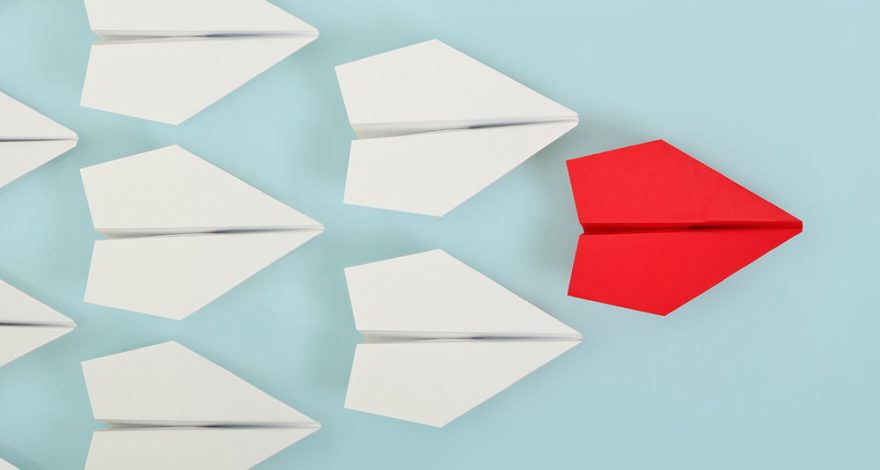 'Thought Leadership' is Just the Beginning

When the U.S. Travel Association launched its monthly Travel Trends Index in February 2016, something unexpected happened.

“We started this service as a way to strengthen our presence in the news media, and it has certainly accomplished that objective,” says Jonathan Grella, the association’s executive vice president of public affairs. “But what we did not anticipate is that the members of our association told us the information we were disseminating was beneficial to them as they did their jobs, and they wanted it, too. So now the information goes to them as well.”

Some people would refer to this as synergy, but whatever you call such happenstance, it represents the new face of thought leadership. The Travel Trends Index, produced with Oxford Economics, amasses meaningful data from a range of industry partners to inform the public of the organization’s expertise and the role of the travel business in the economy. Bloomberg, Reuters and the travel industry site SKIFT, among others, have cited Travel Trends Index statistics, elevating not just the association’s presence but also its leadership in understanding and interpreting broader developments in the national economy.

“The idea was not just to highlight an individual as a ‘thought leader,’ but to highlight the association itself,” Grella says. “Also, we didn’t want to just piggy-back on information provided by another organization. We wanted to draw on data that we produce ourselves. That way we use our own expertise to become part of the conversation. And it has worked.”

Until recently, thought leadership was largely a matter of getting the CEO to sign an op-ed that is placed in a major newspaper or magazine, and maybe getting a speaking gig for the boss at a conference. And while there is still value in this approach, things are changing—and rapidly.

It all started on Thursday, January 13, 1972, with a man named Herb Schmertz. In the bottom-right corner of The New York Times op-ed page, there appeared an article as persuasively argued as any other that appeared that day, but with a difference. This one, written by Schmertz, was paid for by Mobil, with its logo appearing prominently below it. The idea came from Schmertz, Mobil’s head of public affairs, who died this past January at the age of 87. Every Thursday for the rest of the decade (there might have been a few times this didn’t happen), Mobil’s bold and thoughtful commentaries, overseen by him, reached millions of the Times’ elite readers.

“Their brilliance lay not just in the quality of their composition, but in the new approach to corporate communications,” according to the Brunswick Review. Such so-called advertorials “bypassed journalists and editors — the gatekeepers of what did or didn’t appear in print — and allowed Mobil to make its case directly to the public. Mobil didn’t use the space to try to sell a product, but instead remained focused on explaining their point of view on national — and often divisive — issues.”

But the importance of the campaign went far beyond a recognition, first by Mobil and then by countless other organizations, of the value of this early form of sponsored content. Under Schmertz’s guidance, Mobil also pioneered what we know today as “thought leadership,” though its theory and application have undergone considerable change and continue to evolve. Schmertz, who came to sit on Mobil’s board and wrote a book called Goodbye to the Low Profile: The Art of Creative Confrontation, said Mobil “made it respectable for companies to have views, opinions and philosophies and to express them.” Now, of course, having a point of view and expressing it clearly is a requirement.

“Thought leadership has gone from being a nice-to-do to a necessity,” says Lisa Ross, president of Edelman’s D.C. office and a panelist at the Council’s Thought Leadership Trend Lab launch event November 19 at the Microsoft Innovation and Policy Center in Washington, D.C. “Consumers and customers expect you to have an opinion. They want to know what your organization’s purpose is — what you stand for and what you believe — and you have to be willing to express it. So establishing thought leadership affects the bottom line.”

The idea itself goes back to the 1870s when something called the Theistic Annual called the clergyman and influential public speaker Henry Ward Beecher “one of the great thought-leaders in America.” The term was also applied during that decade to Ralph Waldo Emerson, the American philosopher. Almost a century passed before The Wall Street Journal referred to Harper’s and other “thought leader publications.” Organizations soon began producing not just op-eds but white papers and other research reports, with business leaders looking for opportunities to speak at conferences and, ultimately, to do TED Talks.

But the coverage of this development has not been unremittingly favorable. Forbes in 2013 called the term “thought leader” one of “corporate America’s “most insufferable” corporate buzzwords. To a degree, that’s understandable. The term itself is vague and, for that reason, almost invites ridicule by people who regard themselves as no-nonsense realists.

“The phrase itself is nebulous – and that’s part of the challenge,” says Chris Bender, Council vice president. “If I say, ‘government relations,’ we generally know what that means. But thought leadership has different meanings to different people and in different settings. To achieve success, our campaign ambition and goals need clarity, specificity and focus. They also need to be achievable: If you’re going after an unattainable goal, it reinforces the idea that thought leadership is a nebulous pursuit.”

The problem with the op-ed approach, according to Grella, is that the opportunities for a successful placement are remote and the impact, even when a piece is placed, is limited. “We just don’t see that as a high-percentage play,” he says. “That’s especially the case when you realize that even within the same PR firm, you might have multiple people trying to compete for the same limited space in The New York Times, Washington Post or The Wall Street Journal.”

But for those who understand the power and possibilities of thought leadership, the richness and depth are only now being glimpsed. “In the old days, you just bought an ad in the newspaper or on TV to state your position, as a subject-matter expert,” says Megan Bloomgren, the American Petroleum Institute’s (API) vice president for communications and also a panelist at the Trend Lab launch. “The options were pretty limited. But today, with the digital ecosystem, there are so many other ways to reach people. There are also ways to reach people who are actively interested in your subject, which provides an opportunity to bring your narrative to them and tell your story.”

The way we understand the art and science of persuasion has also changed. “In the early days of thought leadership, the idea was that there were a limited number of subject-matter experts who were the authorities on any given question,” Bloomgren says. “You wanted to establish your CEO as a subject-matter expert. But today it is much more involved than that. We are all involved in persuading others of our point of view and engaging them in the dialogue. That can take many forms, as this statistic indicates: Six in 10 people on social media now share a news article without even having read it themselves. Considering how we share information and ideas, in a sense, all of us are now thought leaders.”

An effort that began, arguably, with Herb Schmertz’s 1972 op-ed can now make use of an entire suite of disciplines. Consider, in the energy field alone, API’s “Power Past Impossible” campaign that kicked off with a 30-second ad during the TV broadcast of the 2017 Super Bowl. In times past, a Super Bowl ad might have been the beginning and the end of a campaign. For API, this is just the start.

“Just five years ago, no one would have imagined the United States could increase production and refining of oil and natural gas while cutting greenhouse gas emissions, which are near 25-year lows,” Jack Gerard, API’s president and CEO, said in announcing the program. “That’s just one way we’ve powered past the impossible, and the new campaign highlights the myriad other aspects of life in which natural gas and oil make the impossible, possible.”

Besides the Super Bowl ad, the multiyear campaign “will have digital, TV, radio and print components, as well as a comprehensive public relations outreach program,” according to an API press release.

“People might think about oil when they’re at the gas pump, but they rarely do so at any other time,” Bloomgren says. “I understand its role in our lives, and we want the general public to understand this as well. I just broke my wrist, and I know about the petroleum products in the cast I’m wearing, in the hair dryer I used this morning and in the dress I’m wearing. This campaign, which really does represent the way thought leadership is evolving, is intended to make everybody aware of these realities and talk to others about them.”

Grella says that the approach U.S. Travel Association’s Travel Trends Index uses has helped shape public perception of the industry in ways that are only now becoming apparent. “We’re in a political situation where things like the travel ban, tensions with trade with China, and the border wall affect how the travel business itself is doing,” Grella says. “The question of whether America is even ‘open for business’ is a concern, and the Travel Trends Index allows us to quantify the health of our own industry in these times.”

“It allows us to show in nuanced ways that while the travel industry is actually doing well and that there is in fact a global travel boom, the modest growth we are experiencing is also taking place at a time when we are underperforming against our historic competitors. And while that modest growth might look good to some, we can also show that we are leaving some business on the table — business that could and should be ours.”

In a time of accelerated change, especially in the way we communicate, it should be no surprise that the definition of thought leadership remains up for grabs. “Good thought leadership takes an issue, looks at its relationship to society and spurs public dialogue,” Bender says. “It gets people actively talking about why that issue matters to them personally and the public at large. Part of a thought leadership campaign’s success can be measured in how much conversation and debate you’ve created, whether or not the debate settles on your organization’s point of view.”

This entails taking stands on important issues. “But that doesn’t mean you have to be political,” says Ross. “People often assume it means taking political positions, but that isn’t necessarily the case. It’s not political, but it is socioeconomic, meaning the public might need to know your opinion on fracking or climate change. It might involve your opinion about sourcing, or diversity and inclusion. What it gets down to, ultimately, is your purpose as an organization, and you can’t dodge that.”

Grella’s advice to others eager to take advantage of the opportunities is “to be authentic and credible and to make the commitment of time and resources. You have to stick to it, to play the long game. The way to break through is to not play off the information that others produce but to produce your own. You have to blaze your own trail and create your own opportunities. That makes more sense and is actually a lot more fun.”