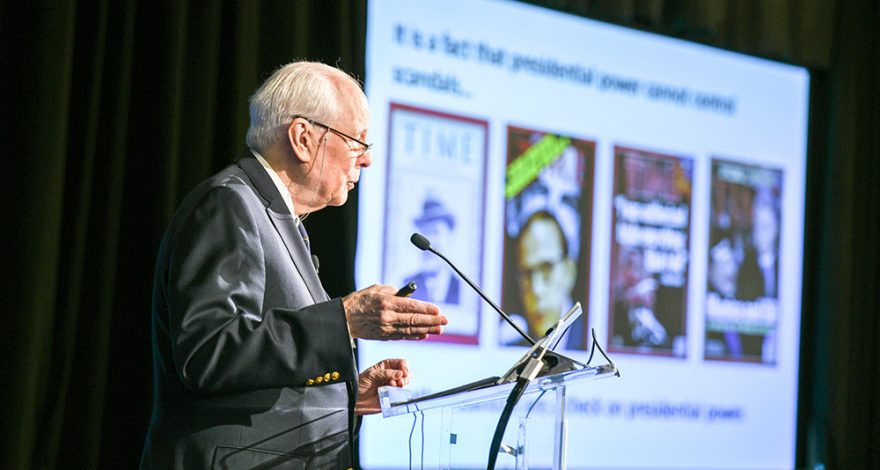 Americans weary of the political divisiveness of recent years look back wistfully to the bipartisanship that marked the final, difficult days of the Nixon administration. Watergate was a trying time, but Republicans and Democrats on Capitol Hill rose to the occasion and worked together to get the nation through a constitutional crisis.

Except it wasn’t like that at all, as John Dean, who was there and should know, told the Council’s Spring Executive Conference attendees in Washington in early April. Dean, the White House counsel whose televised testimony before the Senate Watergate committee led to Richard Nixon’s resignation in August 1974, said the civility that supposedly characterized that episode is one of the “myths of Watergate.”

“People think of Howard Baker [the ranking Republican on the Watergate committee] as a hero of that story, when, though not many people know it, Baker had a back channel to the White House,” Dean said. “Another myth is that the committee agreed on how to proceed. In fact, every vote in the committee was divisive. The Republicans were very slow to realize that impeachment was necessary. It was only when the committee’s decisions were made public did they become ‘unanimous.’”

The committee spun its work so beautifully that we still accept its interpretation of events 45 years later. There are Watergate myths, and there are also Watergate lessons. The most obvious is that the cover-up is almost always worse than the crime. That has become commonplace.

But Dean shared some other lessons, and they were not learned without pain. “I did some stupid things,” he said. Pleading guilty to obstruction of justice, Dean spent four months in federal custody and was disbarred. After his return to private life, he became an investment banker, author, speaker, and, in recent years, frequent political analyst on cable talk shows. The demand for his commentary has increased, as might be expected, as talk of impeachment has again heated up.

“By the time of the 2018 midterms, there are at least 20 investigations into Trump-related scandals,” Dean said. “I don’t know how they will play out, but it won’t be a pretty ending.” A great deal depends, of course, on how the White House handles those scandals.

One notable predecessor, Bill Clinton, enjoyed an uptick in his approval ratings during the impeachment process, Dean said. While presidents have the ability to influence their approval ratings, they “have no power over scandals. What makes a scandal is the reaction of the public.”

Unfortunately, managing public reaction is something we seem hard-wired as human beings to do poorly. Drawing on the work of psychologist Daniel Kahneman, the author of Thinking, Fast and Slow, Dean said the only rational — and tactically effective — response to scandal is “prompt disclosure.”

But that’s not how our brains work. We hate losing three times more than we enjoy winning, and, feeling threatened with exposure, we almost always try to conceal wrongdoing. “There are certain costs of prompt disclosure,” Dean said. “Hoping to avoid these costs, we engage in ‘risk preferring’ behavior. We would prefer the uncertain risks we run by trying to conceal wrongdoing to the certain risk of disclosure,” when the consequences of exposure later on are usually far worse.

“We tend to be overconfident in our ability to escape those certain costs,” Dean said, citing the work of Richard Painter, the chief White House ethics lawyer in the George W. Bush administration and a professor of corporate law at the University of Minnesota. We have a “cognitive bias toward concealment. We double down rather than ’fess up — even when that choice is irrational and leads to ruin.” That thinking brought down the Nixon presidency, Dean reminds us, and organizations facing crises of their own might learn from that example.

Fight or Flight: How Americans React to Corporate Crises and Controversies