What’s Next for Cuba? 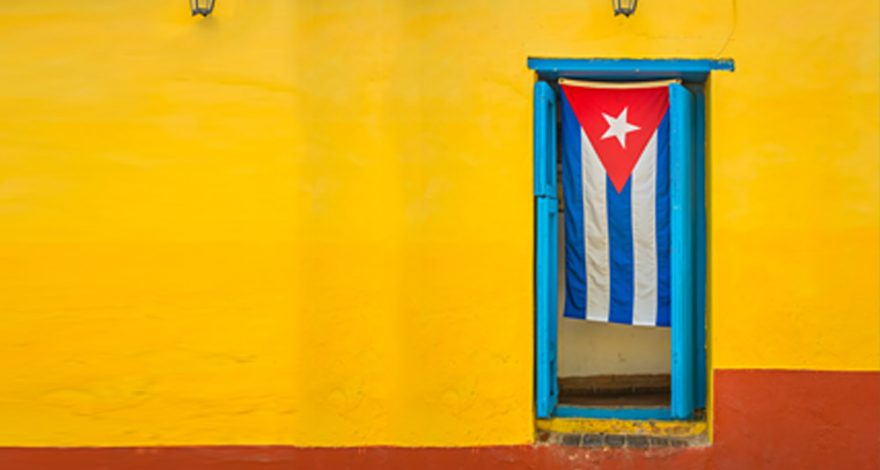 What’s Next for Cuba?

She was also in charge of U.S. policy toward Cuba under President George H.W. Bush and has been U.S. ambassador to Madagascar and Mali. In Our Woman in Havana, Huddleston discusses her experiences in Cuba and looks at that troubled island nation’s future.

Tell us about your first encounter with Fidel Castro.

This was in 1991, at a soiree celebrating Cuba’s tripartite agreement with South Africa and Angola, which resulted in 50,000 troops withdrawing from Africa. There was a roomful of diplomatic types, and I was one of only two other women there, except for Castro’s translator. Castro knew who I was because they are obsessed with the U.S. delegation, and I’d been in Cuba many times. So he comes right over to me — he was a big man — and says, “Who are you? Are you somebody’s spouse?” So I pulled myself up to my full height of 5’5” and said, “No, I am the director of Cuban affairs.” And Castro paused and in a very loud voice said, “Oh? I thought I was the director of Cuban affairs!” He won the first round, but I tried to hold my own in the second.

He took my arm and escorted me into the room where the banquet was held and gestured for me to fill my plate. I did, and as soon as I had my hands full, he took me aside and demanded to know when we were going to end the “blockade,” as he called it. I said it was not a blockade but an embargo — that Cuba was free to trade with anybody it wished, just not the U.S. I said the embargo would end when Cuba had free and fair elections, with international observers. Castro said we would never lift the embargo because “those worms” — his word for Cuban immigrants in this country — would never allow it. And in a sense, he recognized the extent to which our policy toward Cuba is what I call a “captured policy.”

What does that mean?

By captured, I mean that it is a function of our own domestic politics, not of our foreign policy, for better or worse. It isn’t good or bad, necessarily, it is just a fact. It’s like our policy toward Israel. The Cuban American National Foundation (CANF), which is the hardline organization for Cuban exiles, copied itself after the American Israel Public Affairs Committee (AIPAC). They actually went to AIPAC to learn how they got to be such an effective political force.

The Obama policy toward Cuba was to open up trade, making it possible for tourism to take place, etc., in the belief that trade always leads to liberalization of an entire society, right? It’s the idea that more American products, including blue jeans and movies, for example, lead to political liberalization.

I think it does have that effect, and let me offer just one story in support of this idea. Carlos Gutierrez, who was George W. Bush’s secretary of commerce and former CEO of the Kellogg Co., was a big supporter of George W. Bush’s hardline policy of tightening the embargo in hopes of weakening the “Stalinist regime,” as they called it. But there was no change of any kind as a result of that policy. But after Obama changed that approach, there were changes, with people working for themselves in Cuba and not just working for the government, with more travel and tourism and the income they generate. Gutierrez saw the changes. People began to see more leeway in their private lives with this increase in economic freedom, and Carlos changed his mind.

That’s great, but does any of this turn into real political freedom?

We don’t know. This regime has been in power for 60 years, but I believe trade can make things so much better for the Cuban people. With the crackdown under President Trump, the people are just devastated. And of course, the State Department warning that Americans shouldn’t go there because of the “sonic attacks” has also hurt.

But did the Americans who went to Cuba experience the “real” Cuba? Critics say that they’ve just been shown a Potemkin Cuba and that this kind of tourism is in fact “pillaging the culture.”

Hardliners always come up with new ways of expressing their opposition, but I don’t think that is completely accurate. The lives of the people have benefited, though there are real concerns. When the Cuban people don’t have enough to eat, and the food goes to tourists in the restaurants — that’s an issue. But what I think is far more rapacious are the cruise ships out of Miami that let off their passengers to spend four or five hours in Havana and then they get back on the ship to sleep. This means the people in Havana aren’t renting rooms to them, and that cuts down on their income.

You say in the book that Trump actually tried to do business deals in Cuba not so long ago. Newsweek reported that the team he sent to Cuba spent “a minimum of $68,000” during a 1998 foray, “when the corporate expenditure of even a penny in the Caribbean country was prohibited without U.S. government approval.”

It’s true that he sent people there, which makes the hard line he has taken so interesting. There’s talk that they wanted to build a Trump hotel in Havana, but I think they were probably interested in a golf course outside Havana, where the DuPonts had a house that is now a hotel. In any case, all financial transactions with Cuba were illegal unless you had a license, which they didn’t have. Even so, they were staying in the hotels and eating at the restaurants.

What do you make of Miguel Díaz-Canel, Cuba’s new president? 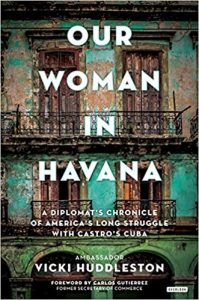 Vicki Huddleston’s book is described as a diplomat’s chronicle of America’s long struggle with Castro’s Cuba.

He’s a party stalwart, but he was never an heir apparent, and no Cuba expert saw him coming. He just seems to have slipped up the hierarchy. What’s interesting is he is so unlike Fidel, with his five-hour speeches, and Raoul, who was shy and introverted. Díaz-Canel, on the other hand, is trying to present himself as an American politician, as a “man of the people.” He rushed to the airline crash site [a passenger jet crashed near the Havana airport in May, killing 112 people], and he is visiting factories and things like that. While Cuba is not a democracy, certainly, I do believe they will get more representational government from someone who is out there seeing how the people really live.

How about the policies he will pursue?

He’s definitely looking for foreign investment to solve some of Cuba’s problems. This means he is looking for investment from Europe, but his biggest benefactors of course are Russia and China. So this will go on without us. Again, we are driving Cuba into the arms of the Russians. Cuba is also writing a new constitution — the constitution Fidel Castro called “irrevocable” is about to be revoked. This will still be a one-party state, but we can look for more transparency within that party, and some more economic freedom. And speaking of China, there’s an interesting possibility about those sonic attacks we’ve been warned about.

What possibility is that?

Well, there has been another attack like those in Cuba, but this one in China. So it is possible that the listening devices that resulted in these attacks were actually of Chinese manufacture, and if there are two or more listening devices in the same room, they can interfere with each other. If that is the case, what looks like an attack might just be junky Chinese products that malfunctioned.