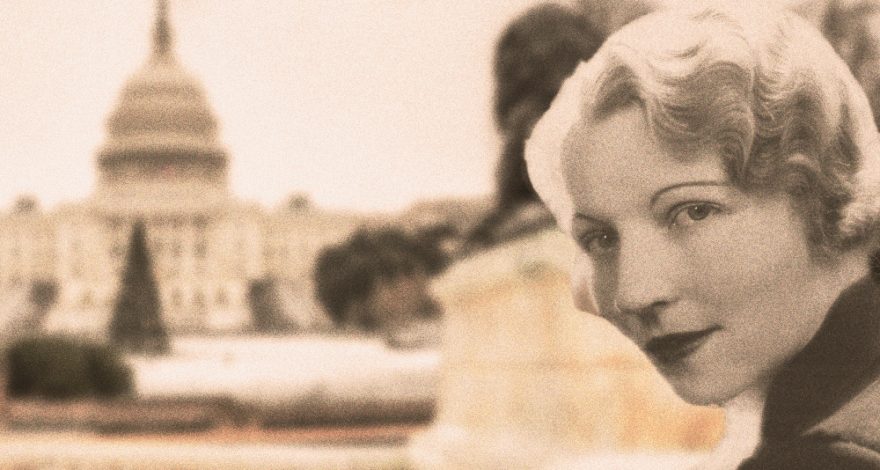 In Washington’s Golden Age: Hope Ridings Miller, the Society Beat, and the Rise of Women Journalists, Joseph Dalton conjures a time in the nation’s capital that seems — like Scarlett O’Hara’s Tara — “gone with the wind.”

But Dalton believes much can be learned from that time, especially about the dignity and decorum with which members of Washington’s ruling class conducted themselves.

Who was Hope Ridings Miller, and why is she relevant today?

Hope Ridings Miller was a native of Texas who came to Washington in 1933 and covered Washington society for 70 years. She died in 2005 at the age of 99. One of the first women to really make it in the men’s world of journalism, she was the society editor of The Washington Post; a syndicated columnist; an author; and editor of Diplomat, a glossy society magazine. The book is called Washington’s Golden Age for a reason. That’s because the period in which she set the tone of society coverage and famous hostesses like Perle Mesta and Gwendolyn Cafritz set the tone of society itself. It was a special time in the life of this city and this country.

And you were related to her?

Distantly. She was my first cousin twice removed. She was the family celebrity, so when any of us came to Washington, about the first thing we did was look her up. I came to Washington when I was 15 and was part of a Model Congress program. When I called her, she immediately invited me to join her for lunch at the National Press Club, which was a big deal for a young person like me. After that, I was a Capitol Hill page and then spent four years at Catholic University. So I learned a lot about Washington during that time — what it was like in her day and in ours.

So how has it changed?

In Hope Ridings Miller’s day, dignity, decorum and respect mattered, and she exemplified these virtues in her journalism. This was during a period in which Washington was much more male-dominated than it is today, where people were arguably more consumed by power, privilege and status than we are today. This was when Washington was, in many ways, a small town where the so-called cave dwellers of Georgetown held sway. But it was a more formal time, too, where people were addressed by their titles, Mr. and Mrs. So-and-So, like that. And in important ways, Washington in that time worked in ways it doesn’t today.

We’re talking here about that period from the end of the New Deal and the beginning of World War II through the Kennedy administration, more or less. And during that time, the government functioned and got things done. It wasn’t just a period of stuffy protocol. Respect was important, and not just respect in social gatherings, but there was respect for the work of government. So business got done.

But there was a downside to that, too, wasn’t there? Isn’t it true that government officials and the reporters who covered them were too chummy?

Sure, that’s true. When FDR was president, Eleanor Roosevelt as first lady held weekly press conferences. These were women-only events, which gave work to female reporters trying to make it as journalists in Washington. But the reporters were very protective of the first lady. She would make some statement, and one of the reporters would ask, “Now is that something you really want to be on the record?” There was this idea that the reporters and the people in government they were covering considered themselves to be allies. There were problems with that, of course, but that was a different world. And because it was so different, the women who wrote for what everyone called “the women’s pages” wrote about more substantive matters than hemlines.

Because no high-status male reporters covered subjects like birth control and women’s health, the women reporters got to cover them. So the women’s pages weren’t as light as we might think. But all that would soon change, as the idea of the women’s pages became obsolete. Back when Ben Bradlee took over as editor of The Washington Post, he said that what was in the women’s pages “bored the hell out of all of us.” So he changed that. It was under Bradlee’s time at the Post that the Style section was beefed up and began to include a lot of serious coverage of the arts and culture. There was social coverage, of course, but that section of the Post, which became the model for sections like it in other newspapers, appealed to all readers, male or female. And by this time, that cozy relationship between reporters and government officials had gone away.

Which is a good thing, right?

It is, in many ways. Our style of journalism today is to tell the whole truth or try to. That wasn’t the case in Hope Ridings Miller’s time. FDR was in a wheelchair, but the American people didn’t know it. Mrs. Miller used to tell me that during JFK’s administration, there was “a new scandal about to erupt every week,” but they never saw the light of day. These usually involved JFK and his women, and the press covered it up. That would be unacceptable today. There were open secrets that everyone knew — everyone in those circles, anyway. This was also a white and privileged time, where class consciousness was huge. But this wasn’t the fault of the society reporters. And it should also be remembered that those big parties thrown by famous hostesses weren’t just about their fancy dresses.

What were they about?

During World War II, the hostesses used the parties to raise money for good causes, for the soldiers and for places like the Stage Door Canteen, where soldiers could go and be entertained. Parties were also how people made connections and developed a community in Washington, which helped ambitious women advance in their careers. But it was also where politicians got together, Republican and Democrat, and got to know each other as people, not just as political opponents.

We could use more of that today, couldn’t we?

When I was researching the book, I interviewed Jim Wright of Texas, the speaker of the House back in the 1980s. We talked about how members of Congress then spent more time in Washington. He told me that members of the Texas delegation held regular family picnics, so you got to know the other members of the delegation and knew their families. I guess the politicians weren’t having to fly back and forth to the district or to the state and spend as much time fundraising as they do today. They moved to Washington, which became their home; it became their community. There’s a downside to that, of course, but an upside as well. I think if members of Congress knew each other’s spouses and children, the way they attack each other might change. They could use more of that dignity, decorum and respect that characterized Hope Ridings Miller’s day.