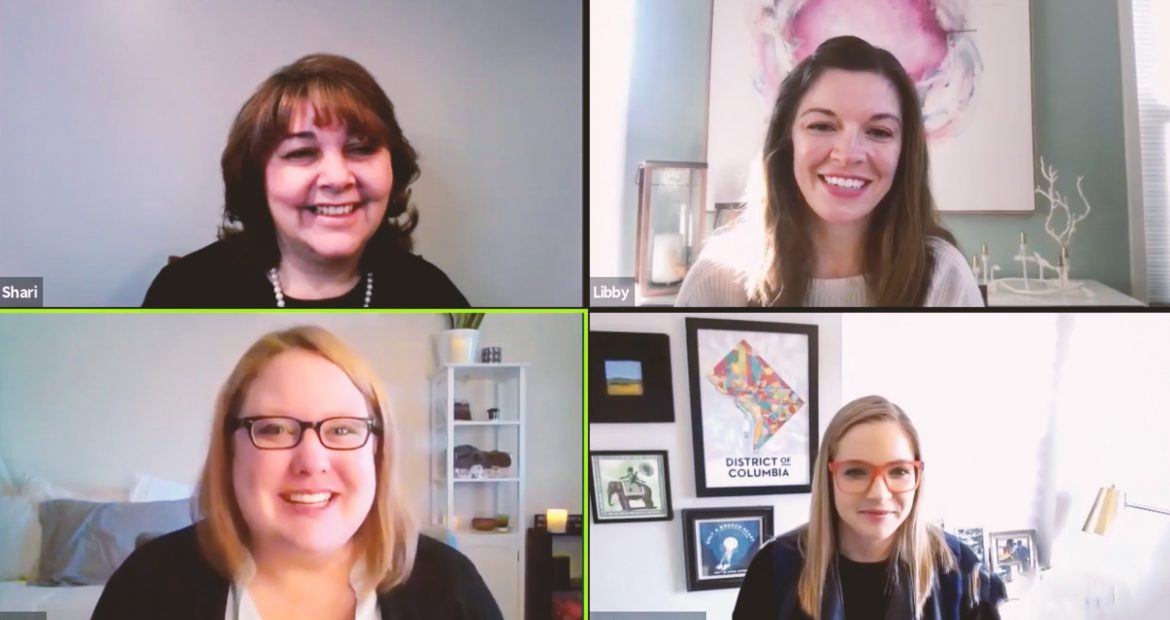 Have you gotten your Anthony Fauci bobblehead yet? More than 42,000 of the playful statuettes, produced by the National Bobblehead Hall of Fame and Museum in Milwaukee, have been sold since they came on the market on April 1, 2020, breaking all of the institution’s sales records almost overnight. (And they are still available.)

The Hall of Fame and Museum is surprised and delighted by the response, but no one is happier about the bobbleheads’ popularity than Shari Dexter, political action director of the American Hospital Association (AHA).

AHA along with The Creative Coalition and the Association for Healthcare Philanthropy (AHP) created Protect the Heroes, to support local health care workers during the COVID pandemic. An estimated $500,000 has been raised with support from the Bobblehead Hall of Fame and Museum, the Major League Baseball Players Association (MLBPA) as well as businesses and individuals, winning for AHA the Council’s 2021 Advocacy Innovation Award in the Communications category.

AHA isn’t alone in achieving success in a difficult year. Toyota was recognized in the Grassroots category, and the American Physical Therapy Association took home the award in the Lobbying category.

“Year after year, I’m impressed by the creativity that our members demonstrate in their advocacy campaigns,” Council President Doug Pinkham says. “But 2020, with all the challenges that came with it, brought out the best in everyone. The American Hospital Association, the American Physical Therapy Association and Toyota have set the standard for achievement.”

The National Bobblehead Hall of Fame and Museum started producing the merch as a way to help during the crisis and found a partner in AHA, with $5 from each sale of bobbleheads going to Protect the Heroes. The funds were designated to purchase personal protective equipment (PPE) and to support health care workers in hospitals around the country.

“It was definitely a group effort,” Dexter says. “And initiating this project taught me some important lessons. The first is that you never know who your partners will be, and the second is related to it: If you have a worthy goal and you’re strategic, it will be magnetic. Other people will come out of unexpected places, because people always look for opportunities to help meet a need.”

Supporting Heroes on the Front Lines

There was never any question of the need. Back in March, when the lockdown occurred, “we saw all our major meetings canceled, and everything was shutting down,” Dexter recalls. “Our members are front-line hospital workers, and when I started working from home, I’d turn on the TV to see heartbreaking footage of our members on the front lines, saving lives — and some didn’t even have the most basic PPE equipment to do their jobs. Something needed to be done to help them get what they needed.”

Eager to share ideas, Dexter called a longtime collaborator, Robin Bronk, CEO of The Creative Coalition, and Alice Ayres at AHP. The three of them put their heads and resources together to build – in record time – a website that enabled people to donate directly to hospitals via www.ProtectTheHeroes.org. “By enlisting the members of The Creative Coalition,” Dexter says, “we maximized star power to support the effort through the media, social media and fans.”  The MLBPA got involved by contributing to hospitals in players’ hometowns.

And before long, there were bobbleheads of Fauci in various poses as well as of Dr. Deborah Birx.

The campaign was appropriately decentralized, as the AHA itself is, which allows for the creativity and autonomy of allied organizations and members. The South Carolina Hospital Association, for example, hired a truck with an electronic billboard that went from hospital to hospital to show support for the workers during National Hospital Week.

“That really caught on,” Dexter says. “The truck would arrive at shift changes, or even when a COVID patient was released. There’d be live music and a celebration to show appreciation for all that health care workers were doing during the crisis. That truck went to dozens of hospitals across the state.”

Because so many contributions went directly to hospitals rather than through Protect the Heroes or AHA, it is difficult, and maybe impossible, to know how much money was raised or — for example — how much PPE was purchased for front-line workers.

“This was about the workers themselves and doing whatever we could to help them,” Dexter says. “With the right project, anything is possible.”

When a pandemic hits and a lockdown follows, Stephen Ciccone has learned over the past year, there are basically two ways you can respond.

“A natural reaction is to view the situation as temporary and do what you’d planned to do all along, but a diminished version of it,” said Ciccone, who is group vice president of government affairs for Toyota. “But we decided early on that we should take a different approach. Instead of feeling limited by the virtual environment, could we leverage the technology and new work practices to do bigger things? The explosion in technology, after all, allows people in our line of work to do things on a scale never before imaginable.”

As an example, Ciccone points to fly-ins, a staple of many lobbying campaigns. “Fly-ins are a huge logistical challenge, and they are costly,” he says. “And even at their best, you can involve maybe 100 people meeting with members of Congress in Washington.”

So instead of taking people to Washington, he says, “we decided to use technology and take Washington to the people! We did a series of virtual town halls, as part of what we called, ‘Virtual Washington Week,’ and were able to reach nearly 10,000. This showed us the potential of a virtual environment.”

Toyota gamified participation in its employee grassroots advocacy program, with participants earning points as they responded to “calls to action.” As they gathered points, they progressed to different levels of ninjas — from “Wannabe” Ninjas to full-fledged “Master” Ninjas. Rewards were given — T-shirts and various tchotchkes — depending on the level. Those who reached Master Ninjas were entered into a contest to win “an in-person advocacy experience.” (Ciccone says that those will need to wait until in-person meetings are allowed again.)

Toyota also produced three high-quality “Take 5” videos — five-minute, animated explainer videos. Scripted and hosted by Ciccone himself, the videos educated employee advocates about the 2020 elections and what was at stake in them. “We used animation to turn civic education into compelling, sometimes amusing, storytelling.”

The videos, viewed more than 7,000 times, were such a hit that the team was asked to translate them into Japanese so members of the broader Toyota network could enjoy them.

“If you looked at the lockdown as something that was confining and temporary, rather than something freeing and extended, you missed the opportunity,” Ciccone says. “We’re not going to return to 2019. The work world has changed forever – although we don’t yet know how. But our motto is, ‘Innovation never stops.’ Maybe next year we can do a physical fly-in, but we will do a Virtual Washington Week too. Some of the things we’re doing that seemed temporary at the time won’t be temporary after all. Successful programs will keep moving forward.”

Any budget cut for physical therapy services under Medicare is a concern, but the cut of 9% that was slated for Jan. 1, 2021, could not have come at a worse time.

“Like so many associations, we had our entire campaign around this issue mapped out,” says Laura Keivel, grassroots and political affairs specialist for the American Physical Therapy Association (APTA). “Our Federal Advocacy Forum — an in-person lobby day in Washington — was scheduled for the last weekend in March and, because of the lockdown, it had to be canceled with two weeks’ notice. So almost everything we were planning to do had to be scrapped. We had to more or less start over.”

The Stakes Were Too High

Many people faced with such a daunting prospect would throw up their hands. “We could have done that,” says Keivel. “We could have decided that if we can’t do what we’d planned to do, we couldn’t do anything. But the stakes were simply too high.”

APTA launched #FightTheCut — right before the pandemic hit, which made everything more problematic.

The cuts would hurt physical therapists, physical therapist assistants and other providers, but they would also hurt patients. The reductions would come in the middle of a pandemic, during which health care providers were already stretched to the max, and patients needed their services.

These challenges were complicated by the fact that patients — with understandable concerns about their health — were reluctant to come in for treatment. Clinics were already laying off employees, and a budget reduction would force some of them to shut down altogether. This, obviously, would further jeopardize the health of the patients they served, some of whom were recovering COVID-19 patients. Finally, the closure of clinics would deny physical therapy students the experience required for them to graduate from their academic programs and then practice.

“As it turned out, we actually did do something important in Washington,” Keivel says. “Staff went to the Capitol and made promotional videos in front of it, saying, ‘We might not be able to get into this building, but here’s what we can do.’”

And what could be done was shifted online. There were Zoom meetings with members of Congress, “once we trained some 200 of our advocates in how to host meetings on Zoom,” Keivel says. “We encouraged supporters of the physical therapy profession to write letters to their members of Congress and even got patients to write letters. We pulled out all the stops and in the end held 45 meetings for the now-virtual Federal Advocacy Forum.”

The campaign focused on both legislative and regulatory efforts. Using templates provided by APTA staff, association members sent more than 25,000 comments to the Centers for Medicare & Medicaid Services (CMS) during the public comment phase that ended in October. Since many of APTA’s advocates had never interacted with CMS before, a social media campaign helped to educate and encourage APTA members and supporters to submit comments of their own. They also emailed more than 120,000 letters to Congress just since September.

The results? The reductions themselves were reduced, from 9% to approximately 3.0%. That’s not ideal, but it is significant for providers and their patients. It is also further evidence, Keivel says, that you can make advocacy doable, even during times when it’s not exactly easy, “if you provide seamless platforms and prewritten templates. The short, engaging videos we produced also proved to be great educational tools. You have to get creative in a time like this, and people will respond when you do.” According to APTA, the fight is not over – they are already ramping up efforts to prevent further cuts to physical therapy services under Medicare in the years to come.

For the first time the Innovation Awards also recognized runners-up in each category: the National Down Syndrome Society for Grassroots Innovation for TikTok advocacy, the National Association of Chain Drug Stores for Communications Innovation for an interactive map and bilingual ad campaigns, and the Distilled Spirits Council for Lobbying for working to pass “cocktails to go” legislation.

The Innovation Awards are presented annually at The Advocacy Conference. Winners are invited to present their campaigns during the awards ceremonies.