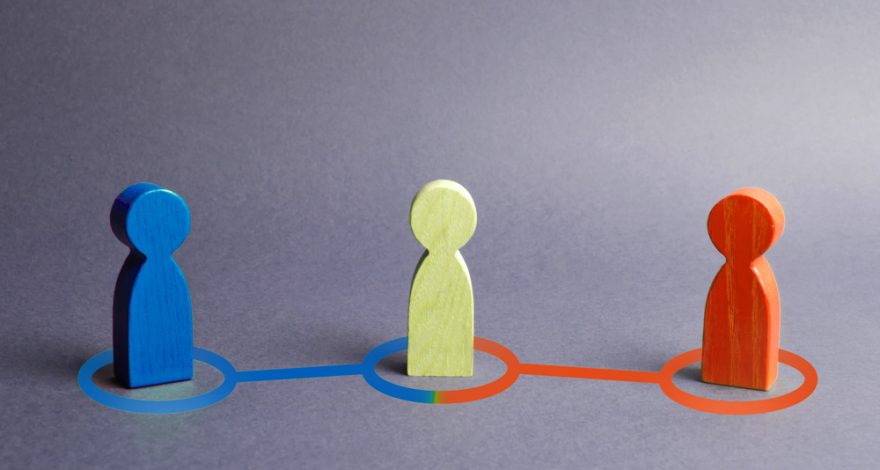 “Why don’t you just meet me in the middle?”

It seems like a long time ago, but much of Washington’s work used to be done by elected officials coming together — across the aisle — to find common ground. Bipartisanship, consensus and compromise were esteemed, and cooperation was not seen as unprincipled, much less treasonous. Moderates and centrists got respect and the ideological extremes were viewed with skepticism.

All that has changed in recent years, and an increasingly polarized political climate has presented challenges to lobbyists trying to influence policy. The “middle” has shrunk, and more ideologically driven leaders of both parties — with Donald Trump supporters on one side, and those of Bernie Sanders and Alexandria Ocasio-Cortez on the other — command the attention and seem increasingly to set the agenda.

“But that is no way to do public policy in a sustainable way,” says Rob Jordan, director of political affairs for the American Medical Association and a speaker on a session about lobbying and the shrinking center at the upcoming Advocacy Conference in Austin, Texas, Jan. 30-Feb. 2. “I hope I’m not being naïve, but I believe that serious people who are paying attention are learning some important lessons from this experience. The all-or-nothing approach embraced by a lot of elected representatives and by activist groups is a dead end. It just won’t work over the long term.”

Even issues on which bipartisanship and compromise should be possible too often become captives of ideology. “Take infrastructure, for example,” says Nick DeSarno, the Public Affairs Council’s director of digital and policy communications. “There has been substantial work done there among centrists, but the longer legislation remains in limbo, the more hardened attitudes about it become. It’s difficult for large legislative packages, championed by administrations, to be passed with bi-partisan support. However, when we look at smaller, specific legislation like criminal justice reform, it can be done. The real magic of advocating to moderate legislators is what happens behind the scenes. I think the Problem Solvers Caucus is stronger than some observers seem to believe, especially in their ability to shape legislation to increase its likelihood of passage and of actually getting things accomplished.”

Sam Tatevosyan, director of government relations for McDonalds Corp., and also an Advocacy Conference speaker, says it is tempting for many government relations professionals “to be distracted by divisive issues, which is where a lot of this polarization we’re facing plays out. I’m convinced that long-term policy making still happens in the middle, even if it seems to be shrinking in a way that is concerning. There’s a lot of noise coming from the extremes, and it gets a lot of attention in the media, but the extremes don’t get much accomplished. If you want to set policy in a way that is sustainable, you have to build from the middle out — which we try to do — and work with the center right and the center left.”

Too often, Jordan says, policy has been set by executive orders from the White House. “Whether you agree with those orders or not, it’s just not a sustainable way to do policy. One administration issues executive orders, and the next one comes in and cancels them. It’s a tennis match.”

Working with legislators from both parties is the only way to influence policy in a way that endures. “Too many groups operate on the belief that a legislator can be with you on 49 of 50 issues, but if they aren’t with you on that last one, they are dead to you,” Jordan says. “That might work if you’re a part-time activist, but it doesn’t work if you’re a full-time lobbyist, and you can’t burn bridges permanently. It’s unrealistic and it is shortsighted.”

For example, after Jan. 6, 2021, when 147 Republicans refused to certify the results of the presidential election, more than 100 businesses announced their PACs would not contribute to these Republicans’ reelection campaigns. “It was important for these companies to send that message,” Jordan says. “But it should not mean that they will never again work with these Republicans.”

Corporate PACs are also facing challenges. “Under their bylaws, they try to be bipartisan, which is true even of those who are not required by their own rules to do so,” DeSarno says. “They try to give 50-50 to Republicans and Democrats, and they try to support more moderate candidates who are serious about making policy. In a transparent world, it is easier than ever for activist groups to discover that someone a PAC has supported has taken a position they find objectionable and attack the company for it. This is true even if the position they are upset about has nothing to do with the policy priorities that have determined why the PAC made its contribution in the first place.”

Trying to anticipate such attacks also makes it difficult to build coalitions that result in what Tatevosyan calls “sustainable” public policy. As an example, he offers the Paycheck Protection Program, which his team at McDonald’s worked on to ensure that small businessmen and women, like those who own McDonald’s restaurants, could keep workers on the job. “This was the program designed to keep employees on the payroll and provide assistance to small business so they could stay afloat during the pandemic,” he says. “It’s a good example of how it is possible to create impactful policies with overwhelming bipartisan majorities in the House and Senate.”

Fortunately, it rarely takes overwhelming bipartisan majorities to influence policy in a constructive way, though it helps. “On some issues, you only need five or 10 votes in the Senate, and sometimes you don’t even need that,” DeSarno says. “There are situations where you don’t even need people to vote with you — only to put in a favorable provision to a bill or agree not to fight something. And these are frequently moderates. These are lawmakers who care about good public policy, and you need to work closely with them — especially in these highly polarized times — because if the House or Senate flips, then the ones who are out of power one year are in power the next. Organizations must play the long game, build strong relationships and develop serious policy proposals backed by research. This isn’t to suggest that this is easier than it is. Centrists often get primaried, and even in the general election, they are often in tough races for reelection.”

Jordan agrees. “In this environment, the very people you might have burned bridges with — over the Jan. 6 issue, for example — might be in power in 2022,” he says. “And if you have severed that relationship, now you’re out. You can’t afford litmus tests, the way highly ideological activist groups and PACs can.”

All Politics Is Still Local?

There’s an important sense in which “all politics is local,” as Tip O’Neill used to say. This is easy to forget when divisive issues get so much national attention. “I’ve been at McDonalds for six years and in the government relations field for 17 years now, and I’ve seen how the nature of lobbying itself has changed during that time,” Tatevosyan says. “I’ve seen big changes, but I’ve also seen how some things have not changed. What has not changed is that elected officials care about issues impacting their constituents back home, and it remains extremely important to connect how any policy issue impacts a Member’s state or district.”

Successful centrists, DeSarno says, “tend to be very close to the people who elected them. I’m thinking of someone like David Valadao, the dairy farmer from California. He’s a Republican from a district that voted for Hillary Clinton and against Donald Trump. Valadao really knows his district and, like a number of centrists, he has developed a well-deserved reputation for great constituent service.”

Valadao’s focus on constituent needs has worked, and companies today are evaluated in a way that is analogous — and new. “There was a time when all businesses needed to talk about was a new product line and lobby about jobs, taxes and economic growth,” DeSarno recalls. “That’s no longer the case.”

Lobbying back then was “largely about issues that impacted a company’s bottom line — taxes and regulation for example — and how the policies you supported would create jobs and lead to economic growth,” according to Tatevosyan. “Companies avoided controversial ‘social issues,’ as they were called.”

From Government Relations to Public Affairs

That’s not good enough today, especially with consumer-facing brands. “In the past ten years or so, we’ve seen the nature of lobbying evolve,” Tatevosyan says. “‘Public affairs’ and ‘government relations’ have become intertwined into a broader understanding of advocacy. Now the appeal you make has to be broader. To influence policy direction, you need a groundswell of support for what you want to achieve. You have to work closely with other stakeholders, build coalitions, assemble and analyze data, engage impacted constituencies and have a more robust approach to advocacy that will enable you to change policy.”

Like members of Congress who do great constituent service, businesses have to know constituents and what they care about. “You have to do a lot of research into what consumers in a given jurisdiction are expecting or demanding of you, and the public’s expectation of the company’s engagement,” Tatevosyan says. “This is where sustainable advocacy is accomplished, and a lot has changed. People today care about corporate governance, which is where equity and workforce issues come in. Ten years ago, consumers didn’t concern themselves much with how you treated your workers or how you sourced your product. Today they do. And the success of your advocacy depends upon how well you know what matters to them and how you can respond to it, often in advance.”

In Years to Come

“Moderates tend to ignore the controversial political issues of the day and keep their focus on issues they can help solve for their constituents,” DeSarno says. “Legislators just want to know whether you are a good employer and a good corporate citizen who makes a positive contribution to your community. And those are the people who you can work with, now and in years to come, no matter how polarized the extremists might be.”

Learn more on this issue and other grassroots, lobbying and communications topics by attending The Advocacy Conference, Jan. 30-Feb. 2 in Austin, Texas.