Pulse 2011: What Americans Think About Business

Americans Hold Favorable Views On Business but not CEOs

The Public Affairs Pulse survey — a first-of-its-kind, in-depth survey of Americans’ opinions on business and government — provides insight on attitudes toward issues ranging from corporate compensation and business’s role in providing public services to crisis communication and lobbying.

Among the survey’s most noteworthy findings, more than six in 10 Americans have a favorable view of major companies. 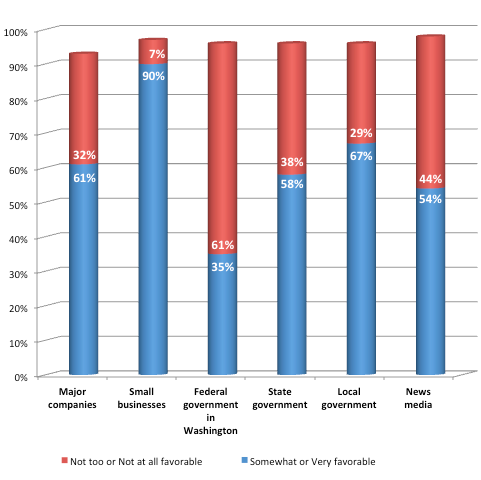 Nearly three-quarters say companies are doing a good job of providing useful products and services. And, remarkably, 71 percent of members of “Gen Y” (age 18-34) have a favorable opinion of business.

Yet despite their overall positive view, Americans also see much to dislike. Many think CEOs are paid too much, while regular workers and lower-level managers are paid less than they deserve. And three-quarters (77 percent) feel there is too much power in the hands of a few large companies.

Americans also tend to think less favorably of a company that hires lobbyists. But, presented with a range of reasons for a company to lobby — including to protect jobs, create a level playing field or reduce costs — the public by and large approves of such activities. The public is generally not in favor of major companies getting directly involved in political campaigns, whether through paying for ads supporting a candidate or creating a political action committee.

The survey, commissioned by the Public Affairs Council and conducted Aug. 10 to Sept. 8 by Princeton Survey Research Associates International, is based on telephone interviews with 1,753 adults in the continental United States.

Find Your Next Job